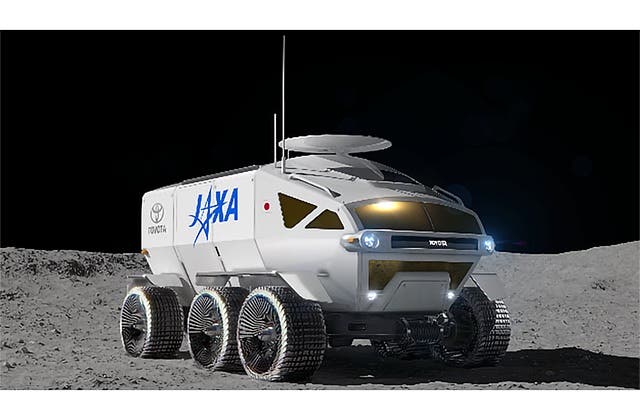 After having conquered the automobile on Earth, Toyota has decided to try their luck off the planet. Together with the Japanese Aerospace Exploration Agency (JAXA), they will study the feasibility of a pressurized lunar rover. The project could launch in 2029.

“Manned rovers with pressurized cabins are an element that will play an important role in full-fledged exploration and use of the lunar surface,” JAXA President Hiroshi Yamakawa said. “Through our joint studies going forward, we would like to put to use Toyota’s excellent technological abilities related to mobility, and we look forward to the acceleration of our technological studies for the realization of a manned, pressurized rover.”

The vehicle will be powered by fuel cells with a maximum range of 6,213 miles and will typically be crewed by two astronauts, but can carry four in an emergency. It would also have deployable solar panels to provide an additional energy source. The current design wouldn’t exactly be street legal, measuring 20 feet (6 meters) long, 17 feet (5.2 meters) wide and 12.4 feet (3.8 meters) high. It will roam on six wheels and have about 140 square feet of living space.

By comparison, the original moon buggy (which was partially designed by car manufacturer General Motors) could seat two astronauts in space suits, had four wheels and were 10.1 feet long (3.1 meters), 7.5 feet wide (2.3 meters) with a maximum height of 3.7 feet (1.14 meters).

“Fuel cells, which use clean power-generation methods, emit only water, and, because of their high energy density, they can provide a lot of energy, making them especially suited for the project being discussed with JAXA,” said Shigeki Terashi, executive vice president for Toyota. 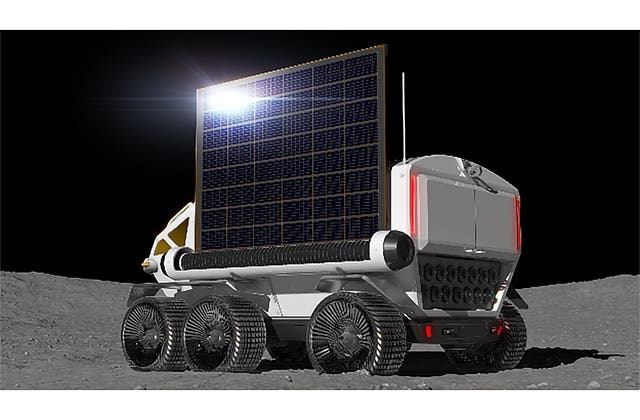 The plan is to primarily power the rover with fuel cells, with a rullup solar panel array supplying additional power. Credit: JAXA.

With gravity one-sixth of Earth’s pull, the new rover will have a lot of challenges in front of it, including a complex terrain with craters, cliffs, and hills. However, Toyota President Akio Toyoda says that the most important part of the rover would be its ability to keep the occupants safe. “I think that coming back alive is exactly what is needed in this project.”

There is no word yet on when a scaled-down version would be available to the public.