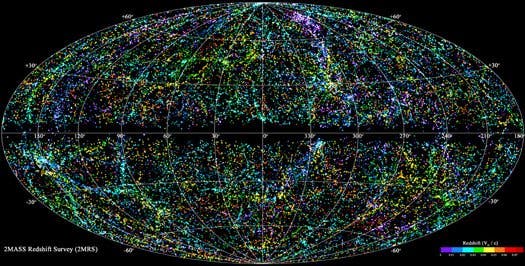 Click for HIGH RES imaging of the most complete, in-detail 3D map of the Universe

While a 3D map of the Universe using the light from 14,000 quasars has been previously released to the public by the Sloan Digital Sky Survey, which is considered the largest map of the known Universe, another version has been recently unveiled which scientists claim to be the most complete map.

Called the 2MASS Redshift Survey (2MRS), astronomers unveiled the most complete 3-D map of the local universe (out to a distance of 380 million light-years) ever created at the 218th meeting of the American Astronomical Society. The 2MRS is the result of ten years worth of painstaking work, and is notable for extending closer to the Galactic plane than previous surveys – a region that’s generally obscured by dust.

“The 2MASS Redshift Survey is a wonderfully complete new look at the local universe – particularly near the Galactic plane,” said Karen Masters (University of Portsmouth, UK), who presented the map at the conference. “We’re also honoring the legacy of the late John Huchra, an astronomer at the Harvard-Smithsonian Center for Astrophysics, who was a guiding force behind this and earlier galaxy redshift surveys.”

In order to create a 3 dimensional map, scientists had not only to know how each element relates spatially on a flat map, but how far away they are from Earth and each other, and this can be achieved by analyzing each galaxy’s redshift. The farther a galaxy is from Earth, the greater its redshift, since its light is stretched into longer wavelengths, and with this in mind the 2MRS was able to achieve that important third dimension.

It’s not only far, far away galaxies researchers are concerned with, but also with aspects closer to home. The motion of the Milky Way with respect to the rest of the universe has been a puzzle ever since astronomers were first able to measure it and found it couldn’t be explained by the gravitational attraction from any visible matter, but now the 2MRS  has mapped in detail areas previously hidden behind our Milky Way.

Props to the Harvard-Smithsonian Center for Astrophysics for this amazing work.

One thought on “The most detailed 3D map of the Universe”