The supermassive black hole emerged when the universe was still in its infancy, and it took light carrying its image 13 billion years to reach us. The process which led to its formation is completely unknown. 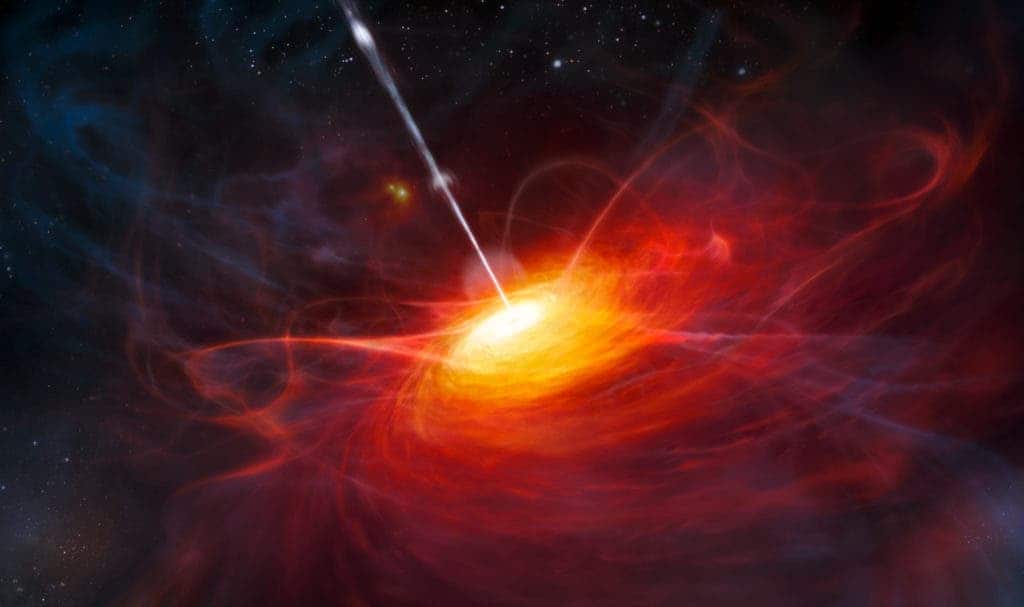 The object was discovered by Eduardo Bañados, an astronomer at Carnegie, as he was looking through multiple all-sky surveys — maps of the distant universe. He was stunned. With a whopping mass, 800 times larger than that of our Sun, the black hole is almost as old as the world itself. The universe is an estimated 13.8 billion years, and this black hole appeared just 690 million years after the Big Bang. It’s the oldest and most distant object we’ve ever seen.

“This is the only object we have observed from this era,” says Robert Simcoe, the Francis L. Friedman Professor of Physics in MIT’s Kavli Institute for Astrophysics and Space Research. “It has an extremely high mass, and yet the universe is so young that this thing shouldn’t exist. The universe was just not old enough to make a black hole that big. It’s very puzzling.”

It’s not just that the black hole formed during these early times, it’s that the universe was undergoing a major shift at that point. During its early stage, the universe went through what is sometimes called the Dark Age — not a metaphor, as it is for the human period, but a truly a dark age as there was no light. The universe was opaque or “foggy” as photons were interacting with early protons and electrons. Light from that age is not visible to us. 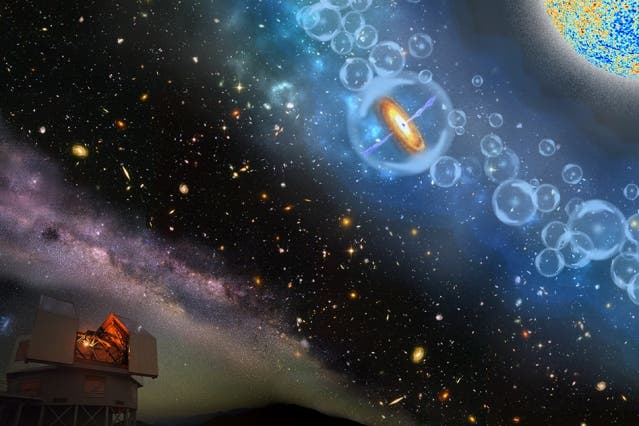 Artist’s conceptions of the most-distant supermassive black hole ever discovered, which is part of a quasar from just 690 million years after the Big Bang. It is surrounded by neutral hydrogen, indicating that it is from the period called the epoch of reionization, when the universe’s first light sources turned on. Image: Robin Dienel (Courtesy of the Carnegie Institution for Science), via MIT.

When this black hole was formed, the universe was transitioning from this dark phase into something more similar to what we see today. More and more stars were forming, eventually generating enough radiation to flip hydrogen from neutral (in which electrons are bound to the nucleus) to ionized (in which electrons are freer to interact). This shift allowed light to pass through the cosmos, eventually reaching a tiny blue dot we call Earth and allowing us to research things far away — both in space and in time. Astronomers believe that the black hole was formed in a universe which was about half neutral and half ionized.

“What we have found is that the universe was about 50/50 — it’s a moment when the first galaxies emerged from their cocoons of neutral gas and started to shine their way out,” Simcoe says. “This is the most accurate measurement of that time, and a real indication of when the first stars turned on.”

It’s the first time we are able to detect something this old, and the prospect is exciting as it offers us a unique glimpse into the past. But the massive black hole also comes with a massive mystery. Black holes take on different shapes and sizes, but most often, they form when a massive star collapses onto itself. But at a time when stars were just starting to light up, they wouldn’t have had the time and mass to form such a black hole.

“If you start with a seed like a big star, and let it grow at the maximum possible rate, and start at the moment of the Big Bang, you could never make something with 800 million solar masses — it’s unrealistic,” Simcoe says. “So there must be another way that it formed. And how exactly that happens, nobody knows.”

To make things even more interesting, this appears to be a supermassive black hole — the most massive known objects in the universe, the likes of which are thought to lie at the center of all galaxies. It’s also very active, devouring material at the center of a galaxy and emitting tremendous light in the process. This classifies it as a quasar, and it’s largely what allowed astronomers to discover it.

“Quasars are among the brightest and most distant known celestial objects and are crucial to understanding the early Universe,” said co-author Bram Venemans of the Max Planck Institute for Astronomy in Germany.

The process that led to the creation of this object remains unknown and will no doubt have theorists busy for years to come.