When the space shuttle was first designed, its makers intended on building the very first partially reusable craft capable of sending cargo or people into space and then return. The vision was extremely seducing: you launch the craft and then within a few days it would be ready to fly again, greatly reducing cost and thus help spearhead humanity into a truly golden space age. Reality: the shuttle’s turnaround time ended up lasting months instead of days, and the  average cost per flight amounted to  about US$1.5 billion until 2008 when the program was canceled.

SpaceX’s Elon Musk, also founder of Tesla Motors of Paypal, has a dream that he’s already put well in motion of a fully reusable craft, one that doesn’t share the flaws of the now passed away shuttle. His vision will be materialized in the form of SpaceX’s fully reusable three stage rocket. Wait, three stage rocket?! If you’re wondering how an Earth you can reuse a three stage rocket, there’s actually nothing simple to it: each component (referring to the lower and mid -stage; the upper stage Dragon capsule has already proven its reusability) is independent and is capable of flying back to its exact launch location after separation. An animation demonstrates the concept. 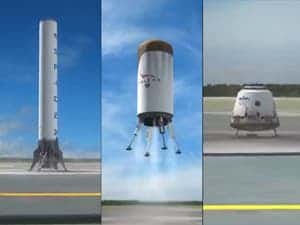 Such a rocket, according to Musk, will be capable of being fully ready for launch again 24 hours tops after it last went into orbit, and cost a hundred fold less than it does today to put cargo into space. Launching the Falcon Heavy and Falcon 9, the rocket SpaceX currently used to launch its Dragon capsule to the International Space Station, costs $10,000 per pound – the reusable rocket would cost only $10 per pound.

“That, however, requires a very high flight rate, just like aircraft,” Musk says. “At a low flight rate, the improvement is still probably around 50 percent. For Falcon Heavy, that would mean a price per pound to orbit of less than $500.”

Of course this doesn’t mean that a reusable rocket doesn’t have its downsides.

“It really comes down to what the staging Mach number would be,” Musk says, referencing the speed the rocket would be traveling at separation. “For an expendable Falcon 9 rocket, that is around Mach 10. For a reusable Falcon 9, it is around Mach 6, depending on the mission.”

For their reusable rocket this means the lower and upper stage separation needs to happen earlier, which puts a lot of extra strain on the upper stage – this translates in less cargo handling capabilities since each stage needs more fuel, first to be able to fly back on their own to the launch side and second to compensate for the earlier separation. Still, if you have enough of these rockets and launch them often enough, this will greatly compensate. Practically, if you could use ONE Falcon Heavy rocket a hundred times in a year, it would become economically feasible  extremely fast – you’re only expense launch to launch is fuel, staff and other miscellaneous expenses; trivial really when compared to having to build an entire rocket from scratch every new launch.

Space flight for the average people

According to SpaceX’s Elon Musk, $200,000 in fuel and oxygen make up just 0.35% of his firm’s launch costs. The rest is in their $56.5 million Falcon 9 rocket.  Musk likens this to throwing away a $300 million 747 after a one way flight. If you give this a minute of thought, you’ll realize that Musk’s completely right and more effort into reusability should have been given a long time ago.

Are there certain technical challenges that can’t be overcome? Is Musk’s claim a pure speculation, a voicing outloud of his dream; pure fabrications and nothing more? Well, Musk has proven time and time again through his endeavors that he means business, and the more ambitious the goal, the better. I mean, if you think his reusable rocket plan is … grand, well wait until you hear about his goal of providing $500,000 there-and-back trip to Mars (using the same reusable rocket concept) or his vision of a 80,000 people strong colony on Mars.

Back to my point, SpaceX has actually demonstrated that this is possible, through the various showcases it has made time and time again using its experimental craft, known as the Grasshopper. So far, it has made seven flights, the latest of which saw the craft fly to 1,000 feet, move about a bit, and then return to its exact point of departure. According to Musk, the Grasshopper has the same degree of maneuverability as a helicopter.

“There is no question in my mind that it will work,” Musk says with trademark confidence. “It’s just a question of how quickly the testing progresses. We expect to do several vertical-takeoff, vertical-landing (VTVL) flights this year and hopefully go supersonic in the fourth quarter.”

At $10 per pound, that means $2,000 for an average male to go into space and sensibly less for a female. When can we expect this to happen? Well, first off after the concept is proven, it needs to grow into a trend – like mentioned earlier, this pricing would be possible if hundreds of flights per year are made using a fleet of reusable rockets. For now, we know that as early as 2014 SpaceX will use a first stage recovery system for its upcoming Falcon 9R rocket (improved Falcon 9), and from there on things will slowly pick up. Nothing’s certain on timing, let alone at the chances of success for such an ambitious endeavor.

Musk admits, “We could fail. I’m not saying we’re certain of success here. But we are going to try to do it.” It’s a giant risk but an equally significant gain if they succeed. Musk says, “If humanity’s ever to expand beyond Earth and establish a self-sustaining base on another planet, it’s critical that we solve this problem.”