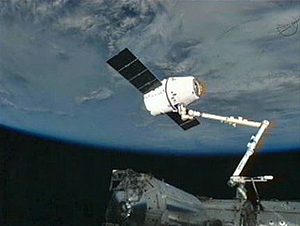 A screencapture of the Dragon docked with the ISS. (c) NASA.tv

After a great deal of excitement following a glitch in the Dragon Capsule’s thrusters, the SpaceX vessel docked with the International Space Station as commander Kevin Ford wielded the lab’s robot arm and secured the spacecraft for berthing.

A day late, the Dragon made a near-perfect rendezvous with the ISS 253 miles above northern Ukraine, much to the delight of the six astronauts and cosmonauts onboard.

“Let me just say congratulations to the SpaceX and Dragon team in Houston and in California,” Ford replied. “As they say, it’s not where you start but where you finish that counts, and you guys really finished this one on the mark. You’re aboard, and we’ve got a lot of science to bring aboard and get done.”

The unmanned vehicle brought 178 pounds of crew provisions, including food and clothing; 300 pounds of space station hardware and more than 700 pounds of science gear destined for important experiments onboard the ISS. Most of the science gear is set to return back with the same Dragon capsule to Earth.

This is the third visit SpaceX has made to the ISS, part of its ongoing $1.6 billion commercial contract with NASA. Currently, SpaceX is the only option NASA has of ferrying cargo to and fro the ISS, after the agency retired its shuttle fleet.