The Uroburos is a mythological symbol representing a serpent or dragon eating its own tail – a symbol of cyclicality and eternal return. The Cassini spacecraft watching Saturn recently caught a glimpse of a storm that looks remarkably like the mythological creature – only it choked on its own tail. 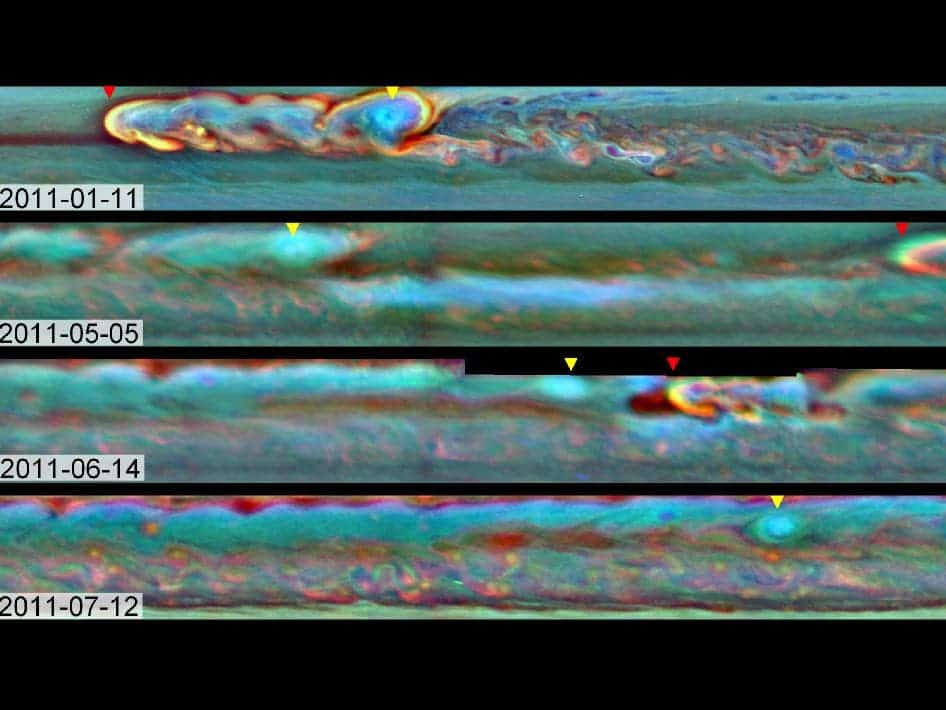 This mosaic of false-color images from NASA’s Cassini spacecraft shows what a giant storm in Saturn’s northern hemisphere looked like about a month after it began. The bright head of the storm is on the left. Via NASA.

The storm came out incredibly violent, churned around the planet until it made it to the other side and back again, choking on its own tail.

“This Saturn storm behaved like a terrestrial hurricane – but with a twist unique to Saturn,” said Andrew Ingersoll, a Cassini imaging team member based at the California Institute of Technology, Pasadena, who is a co-author on the new paper in the journal Icarus. “Even the giant storms at Jupiter don’t consume themselves like this, which goes to show that nature can play many awe-inspiring variations on a theme and surprise us again and again.”

Earth’s hurricanes typically feed off energy from warmer waters, leaving behind a cold-water wake – this storm in Saturn’s northern hemisphere also feasted off warm “air” in the gas giant’s atmosphere in a similar fashion. From what we know of however, terrestrial storms have never encountered their own wakes – they stumble upon topographic features such as mountains and are blocked by them. The bright, turbulent storm head was able to stomp a path all the way across the planet, and it was only when it ran into itself again that it stopped. 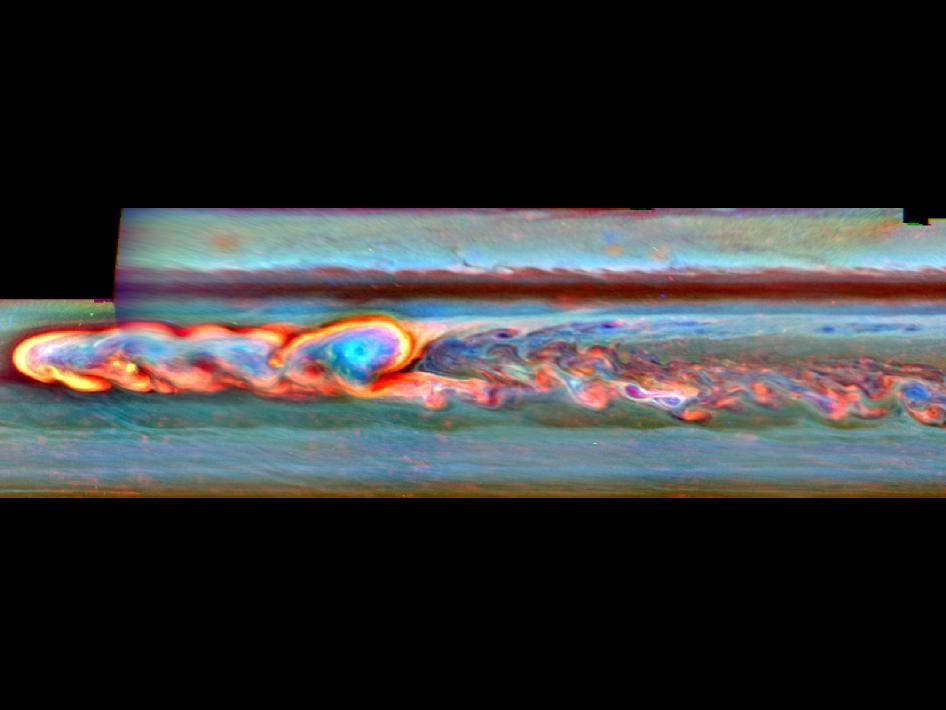 This is also a mosaic of false color.

“This thunder-and-lightning storm on Saturn was a beast,” said Kunio Sayanagi, the paper’s lead author and a Cassini imaging team associate at Hampton University in Virginia. “The storm maintained its intensity for an unusually long time. The storm head itself thrashed for 201 days, and its updraft erupted with an intensity that would have sucked out the entire volume of Earth’s atmosphere in 150 days. And it also created the largest vortex ever observed in the troposphere of Saturn, expanding up to 7,500 miles [12,000 kilometers] across.”

Every Saturn year (~30 Earth years), massive storms occur – but this one was definitely the largest in that period.

“Cassini’s stay in the Saturn system has enabled us to marvel at the power of this storm,” said Scott Edgington, Cassini‘s deputy project scientist at NASA’s Jet Propulsion Laboratory in Pasadena, Calif. “We had front-row seats to a wonderful adventure movie and got to watch the whole plot from start to finish. These kinds of data help scientists compare weather patterns around our solar system and learn what sustains and extinguishes them.”