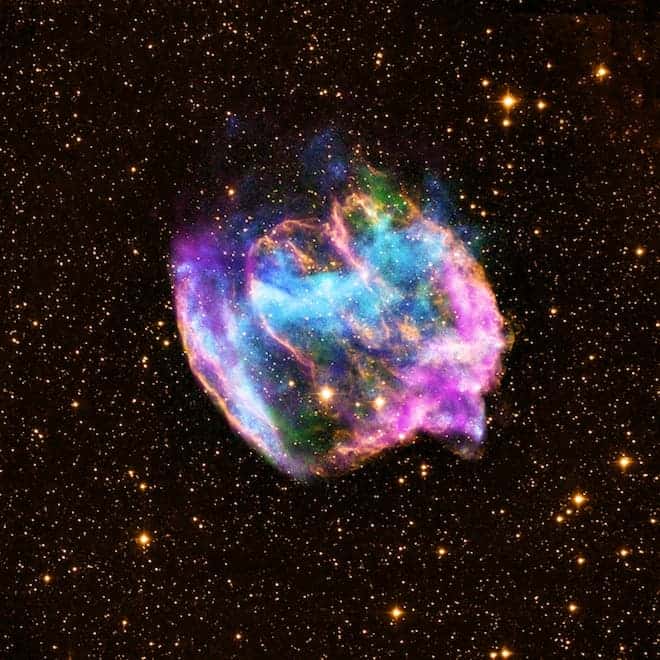 This highly distorted supernova remnant may contain the most recent black hole formed in the Milky Way galaxy. The composite image combines X-rays from Chandra (blue and green), radio data from the Very Large Array (pink), and infrared data from the Palomar Observatory (yellow). (c) NASA

Astronomers at NASA‘s Chandra X-ray Observatory were delighted to come across one of the rarest events in the Universe, after they came across an atypical kind of supernova. To top it over, the supernova’s remnants may have given birth to the Milky Way’s youngest black hole estimated thus far.

After a massive star, say ten times more massive than our own sun, dies, it explodes spilling its contents through out space – a highly energetic event called a supernova. Typically remnants are symmetrical, bursting outward in an ever-expanding bubble. However, the supernova discovered by the NASA astronomers, called W49B and located some  26,000 light-years away, doesn’t quite fit the pattern.

Scientists found that the supernova ejects matter in an asymmetrical manner, shooting off material near its poles at a much higher speed than from elsewhere on its surface. Also, its chemical concentration has also been found to be asymmetrical only half of the remnants showed concentrations of iron, while sulfur and silicon were spread evenly throughout the explosion – another sign that W49B is not your usual nugget.

Actually, this kind of supernova is so rare that it’s the first ever discovered in our galaxy. Get ready for a kicker, though, since W49B is a real super star… or used to be at least.

Based on the information astronomers have gathered thus far, actually the lack of information for that matter, they believe  a black hole may have formed. Such massive stars like the one that sparked the W49B supernova typically leave behind neutron stars — heavy, compact objects that emit  X-rays or radio pulses. No such signals were detected, however, which gave rise to the conclusion.

Now, considering was W49B and was created 1,000 years ago, it would mean that this potential black hole is the youngest in the Milky Way.