Pluto’s volcanoes appear to have spewed out ammonia-rich watery fountains into space, hinting at a complex (and quite possibly, organic) chemistry of Pluto’s subsurface sea.

“This was a huge surprise to all of us about Pluto,” says planetary scientist Dale Cruikshank of the NASA Ames Research Center in Moffett Field, Calif. “It means there are lots of surprises waiting to be uncovered in that part of the solar system.” 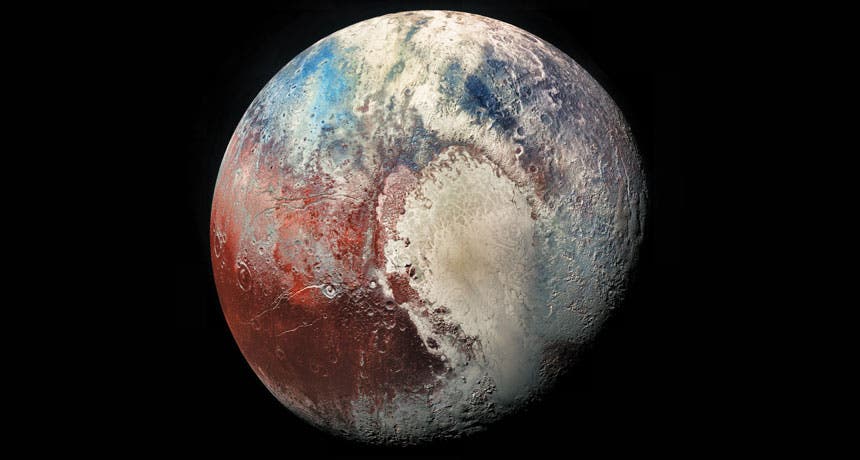 Before the New Horizons mission, our understanding of Pluto was very limited. The interplanetary space probe whooshed by the planetoid, offering an unprecedented view of Pluto’s surface and that of its satellites, showing that the entire planetary system is much more complex than previously anticipated. This sparked a renewed interest for studying Pluto — and data from New Horizons keeps coming in.

Now, a new analysis of spectral images obtained with the New Horizons spacecraft indicates the presence of ammonia on Pluto’s surface. These spectral data (essentially different wavelengths of light) can reveal the chemical signature of different substances. Cruikshank and his colleagues analyzed the images and found a variety of ice on top of a bedrock of water ice — Pluto’s surface temperature is about minus 390 degrees Fahrenheit (minus 270 degrees Celsius), which is cold enough to form mountains from water ice. It’s not this water that was surprising — researchers have suspected for a while that Pluto’s dense core surrounded by a mantle of water ice, and they’ve also known that Pluto’s surface hosts mountains of water ice.

Instead, it’s the ammonia that was surprising.

Ammonia isn’t able to survive for a long time on the surface of a body like Pluto. Without an atmosphere to protect it, ammonia is destroyed with relative ease, in as many as 400,000 years (which, at a planetary scale, is the blink of an eye). So the presence of ammonia suggests that Pluto has a young or renewed surface.

“If you find it at all, it suggests that it has been put there fairly recently,” Cruikshank says. “There is really no limit [to how recently], as far as I can see in the geology.” 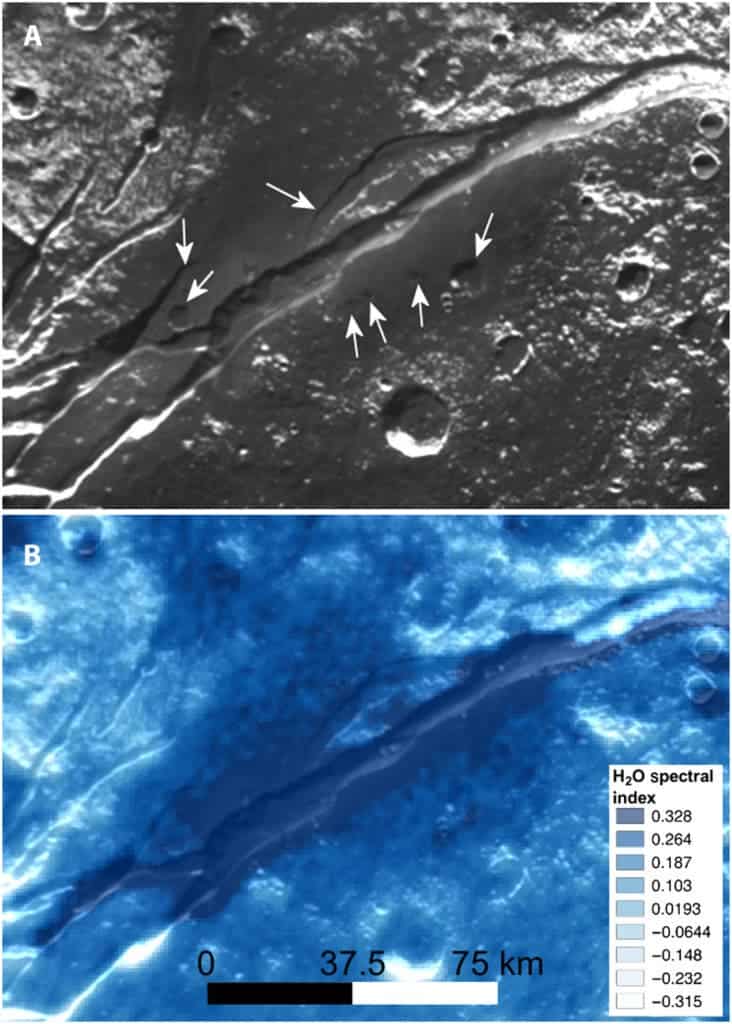 A section of Virgil Fossae. Arrows point to topographic features that are muted in form by an apparent mantling by material ejected in a cryovolcanic event within the fossa main channel. Below, the same region shown with water ice distribution: darker shade of blue indicates greater concentration. It’s stunning that we can see features on Pluto in such detail. Image credit: NASA, Johns Hopkins University, Southwest Research Institute.

This isn’t the only possibility though. Ammonia might also survive in a more durable chemical form such as a hydrated or an ammoniated salt, which are much more resilient. However, the location of the newly-discovered ammonia signatures is also intriguing: it appears to be clustered around a geological feature called Virgil Fossae — essentially a large ditch-like feature, probably a fissure associated with ice volcanism (also called cryovolcanism).

Ammonia is also an excellent antifreeze, researchers write. In sufficient quantities, ammonia can lower water’s freezing point by 100 degrees Celsius. If Pluto’s subsurface mantle ocean contains ammonia, that would help explain how the water remains liquid despite sub-freezing temperatures. A recent study also shed more light on Pluto’s liquid water, suggesting that it is kept in place by a thin layer of gas.

The observations revealed another surprise: a red material that Cruikshank’s team thinks represents complex organic material. This is consistent with the existence of ammonia molecules and could suggest that Pluto’s ocean also has organic molecules. This was not confirmed, and even if this is the case, it doesn’t mean that Pluto can host life — it merely suggests that the chemical precursors to life can emerge even in such inhospitable places.

Not everyone is convinced, however.

Marc Neveu, an astrobiologist at NASA Goddard Space Flight Center in Greenbelt, Md., who was not involved in the study, says that the quality of these images is not sufficient to draw a definite conclusion. Also, without a direct chemical analysis, it’s very difficult to assess the exact chemistry of Pluto’s surface.

Also, there’s no indication so far as to whether this was a singular eruption or a regular phenomenon. Ammoniated ice was spread as far as 200 kilometers from the fissure, but this could have been produced by a singular eruption. If this was the case, the eruption would have shot water at speeds of over 300 meters per second (1080 km/h), with the water freezing midair before falling down around Virgil Fossae.

At any rate, the Virgil Fossae complex is part of a tectonic system, which seems to include some form of cryovolcanism. Researchers make a good case for supporting this idea, suggesting that these eruptions also bring ammonia from Pluto’s mantle up to the surface. While the case isn’t settled yet, it’s yet another indication of how intriguing Pluto’s geology really is.