New close-ups of Pluto’s surface have been revealed by NASA today, revealing a stunning variety of features on the frozen planetoid. A range of majestic mountains surrounds seemingly endless plains, and now, we get to see them all with unprecedented quality. 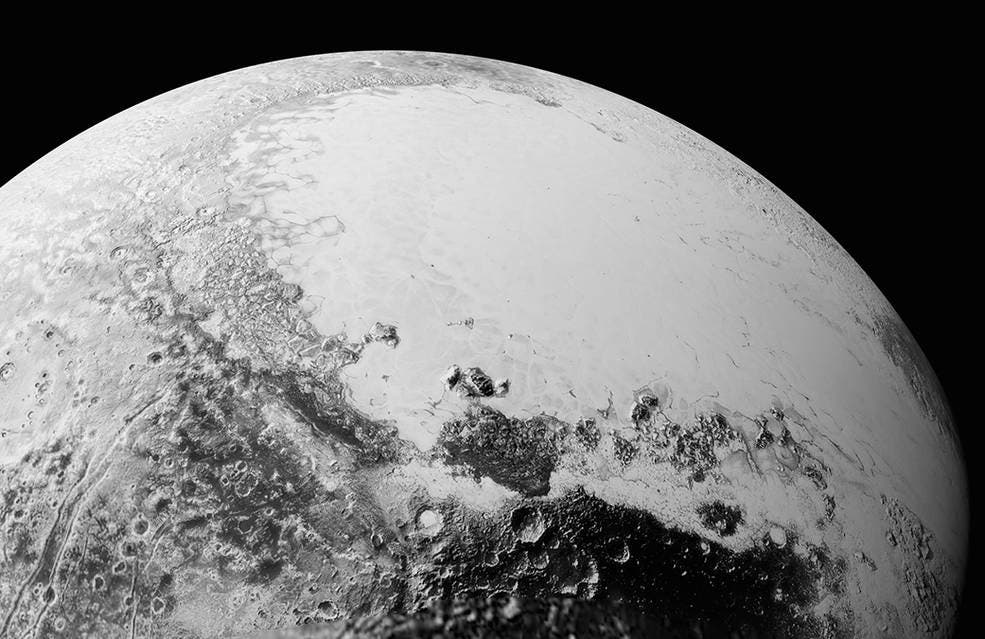 This synthetic perspective view of Pluto, based on the latest high-resolution images to be downlinked from NASA’s New Horizons spacecraft, shows what you would see if you were approximately 1,100 miles (1,800 kilometers) above Pluto’s equatorial area. Credits: NASA/Johns Hopkins University Applied Physics Laboratory/Southwest Research Institute

It’s so spectacular that even NASA’s investigators were surprised.

“Pluto is showing us a diversity of landforms and complexity of processes that rival anything we’ve seen in the solar system,” said New Horizons Principal Investigator Alan Stern, of the Southwest Research Institute (SwRI), Boulder, Colorado. “If an artist had painted this Pluto before our flyby, I probably would have called it over the top — but that’s what is actually there.”

The New Horizons space probe was the first space probe to investigate Pluto up-close, but it already passed by the planetoid in July, so why are we seeing these photos just now? Well, New Horizons took a massive amount of data and it will take about a year before NASA is able to download all the data – and it will also take a while to analyze them. In the meantime, we have to settle for these gorgeous pics. 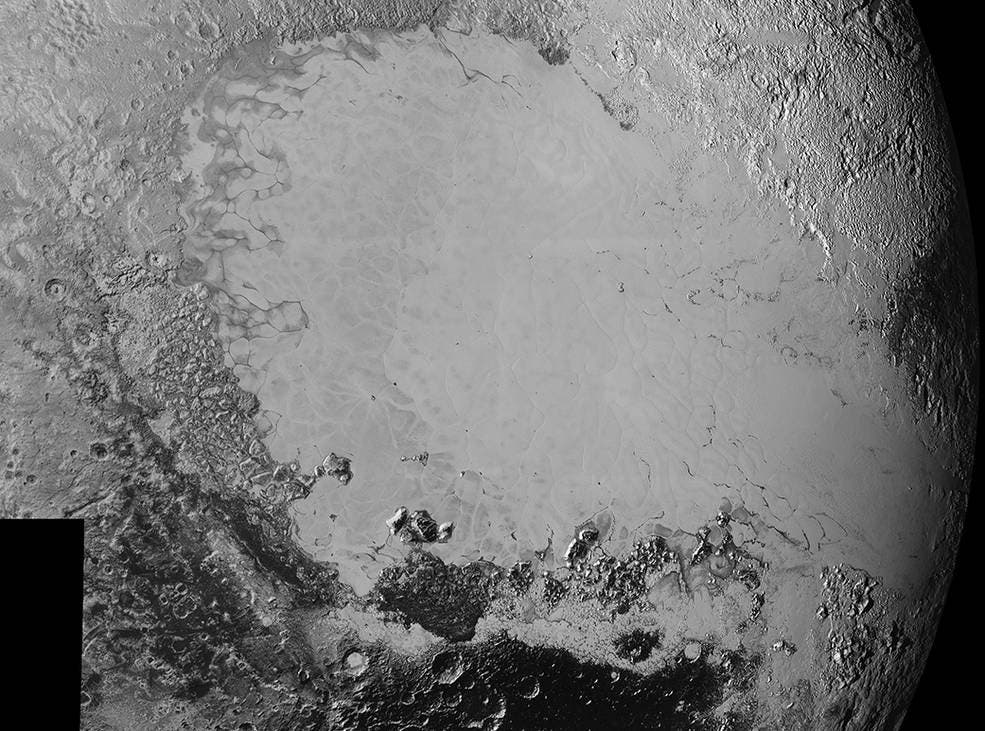 Mosaic of high-resolution images of Pluto, sent back from NASA’s New Horizons spacecraft from Sept. 5 to 7, 2015. The image is dominated by the informally-named icy plain Sputnik Planum, the smooth, bright region across the center. This image also features a tremendous variety of other landscapes surrounding Sputnik. Credits: NASA/Johns Hopkins University Applied Physics Laboratory/Southwest Research Institute

But aside from being stunning, the photos highlight the surprising diversity of features on Pluto. Possible dunes, nitrogen ice flows that apparently oozed out of mountainous regions onto plains, and even networks of valleys that may have been carved by material flowing over Pluto’s surface were spotted.

“The surface of Pluto is every bit as complex as that of Mars,” said Jeff Moore, leader of the New Horizons Geology, Geophysics and Imaging (GGI) team at NASA’s Ames Research Center in Moffett Field, California. “The randomly jumbled mountains might be huge blocks of hard water ice floating within a vast, denser, softer deposit of frozen nitrogen within the region informally named Sputnik Planum.” 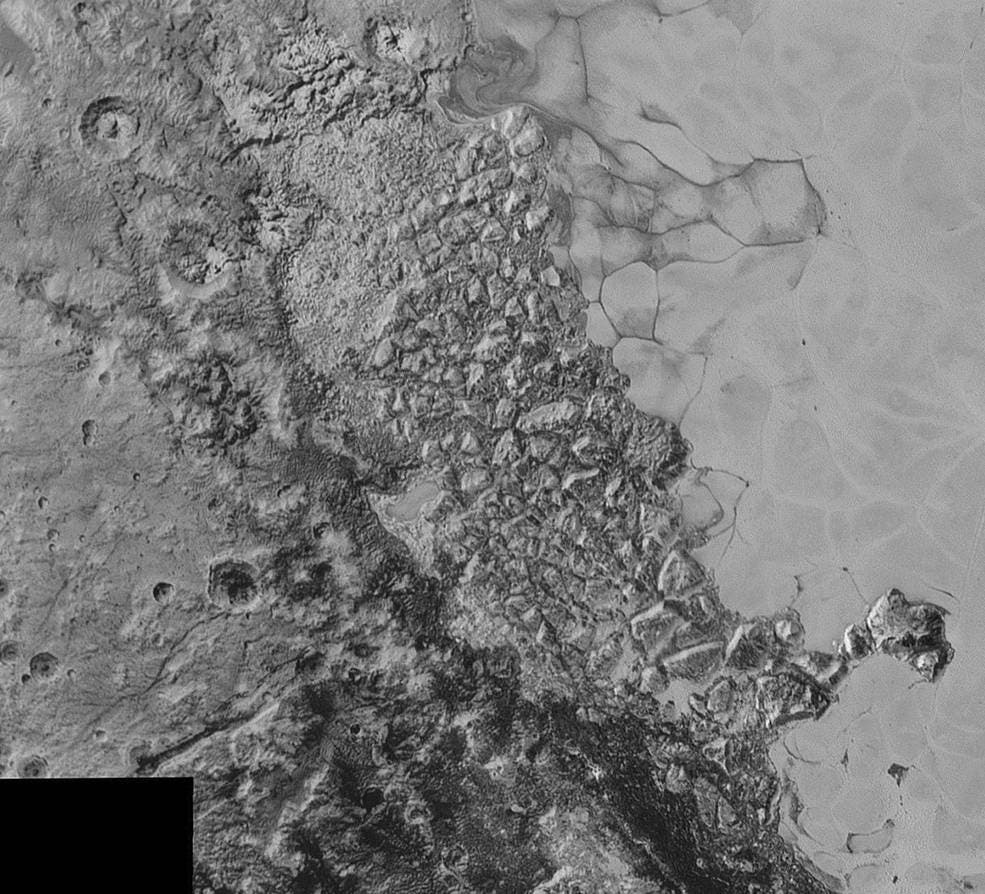 In the center of this 300-mile (470-kilometer) wide image of Pluto from NASA’s New Horizons spacecraft is a large region of jumbled, broken terrain on the northwestern edge of the vast, icy plain informally called Sputnik Planum, to the right. The smallest visible features are 0.5 miles (0.8 kilometers) in size. This image was taken as New Horizons flew past Pluto on July 14, 2015, from a distance of 50,000 miles (80,000 kilometers). Credits: NASA/Johns Hopkins University Applied Physics Laboratory/Southwest Research Institute

Old, heavily cratered terrain sits next to young, pristine fields. But the most surprising things are the dunes (yet unconfirmed).

“Seeing dunes on Pluto — if that is what they are — would be completely wild, because Pluto’s atmosphere today is so thin,” said William B. McKinnon, a GGI deputy lead from Washington University, St. Louis. “Either Pluto had a thicker atmosphere in the past, or some process we haven’t figured out is at work. It’s a head-scratcher.”

The images are so detailed that you can actually do (large scale) geologic studies on them – which in itself is amazing. Who would have thought, a few decades ago, that we’ll be able to study the geology of something 3 billion kilometers away?

“This bonus twilight view is a wonderful gift that Pluto has handed to us,” said John Spencer, a GGI deputy lead from SwRI. “Now we can study geology in terrain that we never expected to see.” 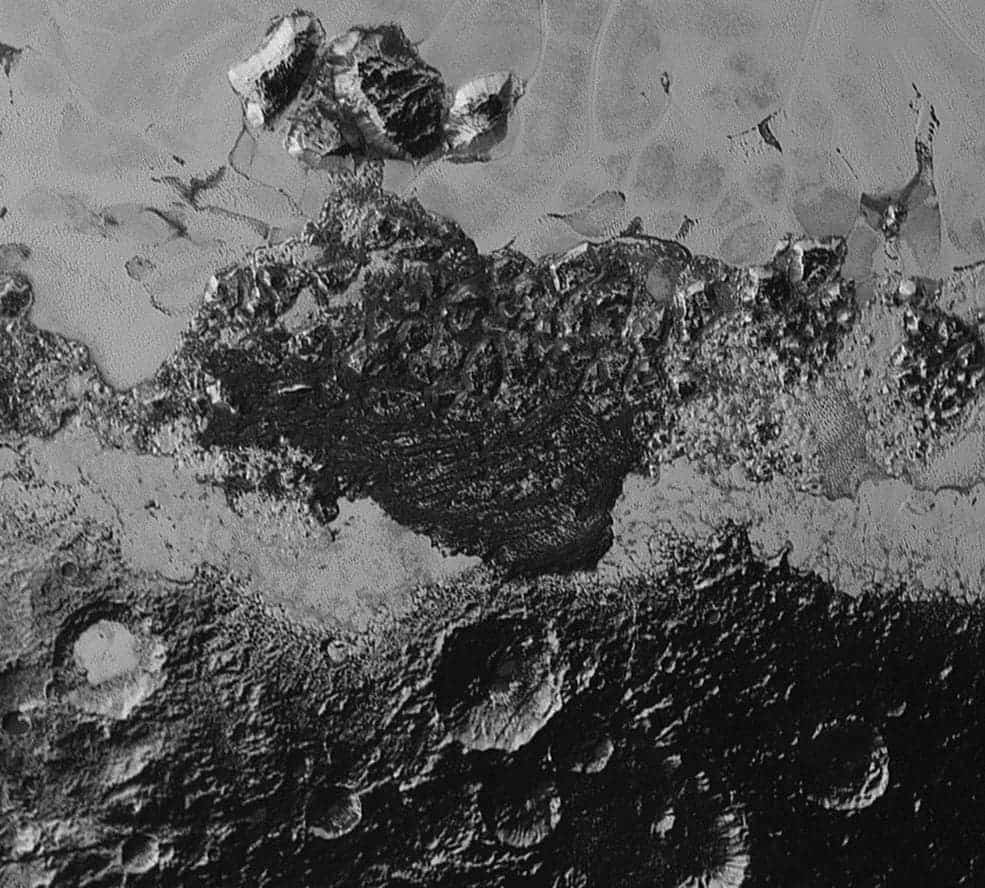 Discoveries aren’t limited to Pluto’s surface – New Horizons also snapped a few images of Pluto’s moons Charon, Nix, and Hydra, which will be released on Friday. 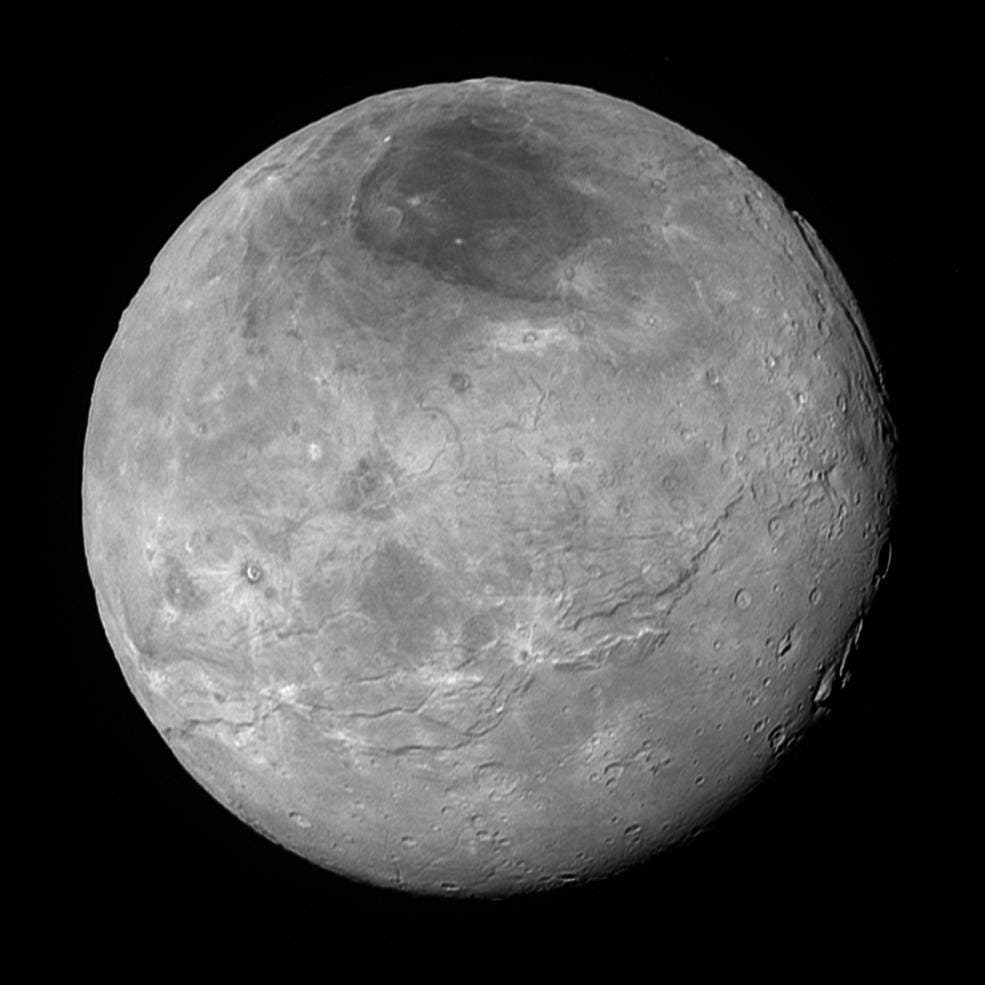 Two different versions of an image of Pluto’s haze layers, taken by New Horizons as it looked back at Pluto’s dark side nearly 16 hours after close approach, from a distance of 480,000 miles (770,000 kilometers), at a phase angle of 166 degrees. Pluto’s north is at the top, and the sun illuminates Pluto from the upper right. These images are much higher quality than the digitally compressed images of Pluto’s haze downlinked and released shortly after the July 14 encounter, and allow many new details to be seen. The left version has had only minor processing, while the right version has been specially processed to reveal a large number of discrete haze layers in the atmosphere. In the left version, faint surface details on the narrow sunlit crescent are seen through the haze in the upper right of Pluto’s disk, and subtle parallel streaks in the haze may be crepuscular rays- shadows cast on the haze by topography such as mountain ranges on Pluto, similar to the rays sometimes seen in the sky after the sun sets behind mountains on Earth. Credits: NASA/Johns Hopkins University Applied Physics Laboratory/Southwest Research Institute