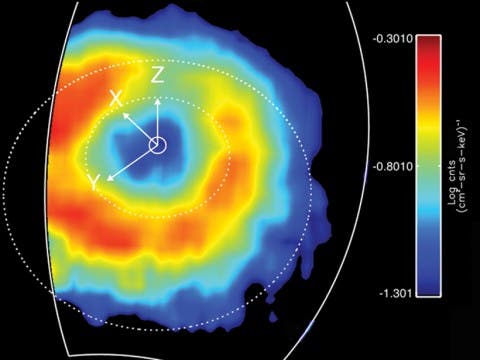 Saturn’s ring current of energetic ions trapped in its magnetic field is shown in this false-color map from the Cassini spacecraft. The colors correspond to the intensities of the energetic neutral atoms emitted from the ring current. These neutral atoms are formed when trapped energetic positive ions take electrons from cold gas atoms, and are then able to escape Saturn’s magnetic field. Credit: NASA/JPL/JHUAPL

Saturn may be a very cold gas giant, but its magnetosphere is filled with plasmas originating from both the planet and its moons. Many of them originate from Enceladus which ejects as much as 1,000 kg/s of water vapor from the geysers on its south pole, a portion of which is ionized and forced to co-rotate with the Saturn’s magnetic field. This so-called plasmasphere is held rigidly in place by the planet’s magnetosphere, and as a result, centrifugal forces tend to fling dense, heavy plasma parcels into deep space.

But not all plasma is sent outwards. As some of the plasma is ejected outwards, less dense plasma rushes to take its place, forming fingers of hot plasma that penetrate deep inside Saturn’s magnetic field. This particular interaction is called an interchange injection, and we still don’t know exactly how it happens.

Now, NASA’s Cassini probe spent a lot of time orbiting Saturn, allowing Thomsen et al. to take a peek and measure several parameters of these injections. Specifically, they were interested in how far these things actually go. They found that most of the water molecules do indeed originate from Enceladus, which has an ocean of liquid water under its frozen surface. This means that water concentrations are highest near Enceladus’s orbit, and decrease farther away from Saturn. The team found that some of these fingers come from regions as distant as 14 times the radius of Saturn, bringing them inward by over six Saturn radii and invading the planet’s magnetic field – that’s 360,000 kilometers!

There are two main theories about how this happens – one considers an already documented phenomenon: pulses of energy that rip themselves from the outskirts of the magnetic field where the solar wind blows them into a converging tail, while the other suggests that they arise pontaneously from turbulence in the magnetosphere.

One thought on ““Fingers” of Plasma Invade Saturn’s Magnetic Field”