Most of us likely own a phone  that has more computing power than that available for the entire Apollo mission which landed a man on the moon, still rather curiously we choose to dedicate most of it to browsing photos of cute cats on the web. Nevertheless, there comes a time when pedestrian technology can come to the aid of science, and recent events give to show how important citizen science can be.

Like most of you are aware by now, a few weeks ago while the world was trembling at the prospect of being hit by a giant asteroid, Russia had a giant fireball blazing through its skies. The meteorite exploded over the Ural mountains, causing millions of rubles in damage and injuring an estimate of 1000 people. The whole event was surprised in hundreds of instances by Russians who had the flair of quickly recording the fireball with their phones and digital cameras, along with CCTV, traffic and car-dashboard cameras. 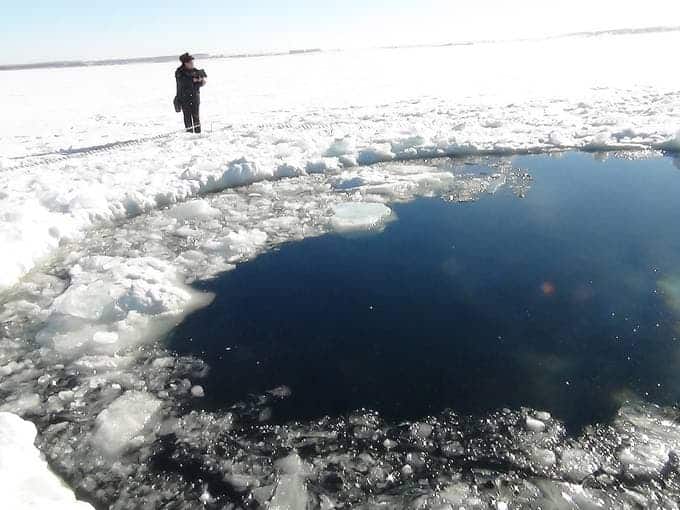 A man stands near a hole in the ice on Chebarkul Lake after a meteor strike. (c) AP

Most of these eventually ended up on the web, sending mixed emotions on the web as they went viral. However, since these videos captured the event from different angles, some with precise date and time stamps, scientists from Colombia  have been able to use these valuable amateur footage in conjunction with advanced trigonometry to establish the origin of the meteorite.

Based on the footage, along with impact sites like those at Lake Chebarkul, astronomers Lake Chebarkul Jorge Zuluaga and Ignacio Ferrin, from the University of Antioquia in Medellin determined the height, speed and position of the rock as it fell to Earth. To reconstruct the origin of the meteorite, however, the researchers employed a nifty trick. There’s a certain point during a meteorite’s atmospheric entry when it catches on fire, becoming bright enough to cast a noticeable shadow in the videos. This allowed them to establish six different properties of its trajectory through Earth’s atmosphere, data which they then inputted in an astronomy software to pinpoint its origin.

Apparently, the meteorite originated from the asteroid belt between Mars and Jupiter – known as the Apollo asteroids – that cross Earth’s orbit. The asteroid belt is home to the largest conglomeration of space rocks in our solar system as 5,200 of a total of  9,700 near-Earth asteroids discovered so far can be found here.

Concerning the meteorite itself, Popular Science reports it is a chondrite —the most common kind of space rock near Earth –  and spent 4.5 billion years in space undisturbed until it encountered out planet.

The Colombian scientists’ findings were reported in the journal Earth and Planetary Astrophysics.