Most people think of asteroids as scary, cold, and lifeless blobs of rock hurtling around the solar system. That’s a pretty accurate description, but that doesn’t mean that asteroids don’t get to have families. According to a new study, 85% of all objects in the asteroid belt can trace their origin to five or six planetoids (small planets) that turned to smithereens in the early days of the solar system. Accordingly, there are five to six families of asteroids tracing their lineage back to these larger parent bodies. 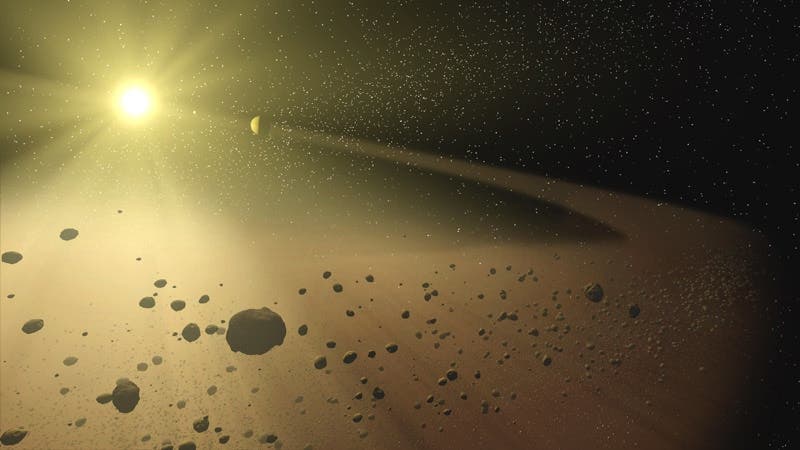 About four to five billion years ago, the solar system was a chaotic, crowded mess. Many of today’s planets had yet to form in their current configuration and collisions between massive planetary bodies were quite routine. Eventually, all this colliding gave rise to many of the solar system’s moons and to the countless asteroids that litter the outskirts of the system. For instance, the main asteroid belt — located between the orbits of Mars and Jupiter — is estimated to contain millions of objects, although only hundreds of thousands have actually been observed.

While these parent bodies fragmented into thousands of smaller bits and pieces, it is possible to piece them back together based on their trajectories. In 1918, Japanese astronomer Kiyotsugu Hirayama was the first to notice that asteroids had similar elements, such as eccentricity and inclination, to their orbit. Suddenly, asteroids were no longer randomly zipping through the solar system but rather groups sharing orbital elements.

Based on Hirayama’s ideas, for the past 100 years, astronomers have grouped asteroids into families and non-families, with only half of all the asteroids that we know of being classed in families. However, this division into families and non-families is not productive, according to researchers led by Stanly Dermott, a Professor of Astronomy at the University of Florida.

Dermott and colleagues found that there’s a relationship between the orbital elements of asteroids and their sizes. By analyzing the dimensions of asteroids and their distribution within the inner asteroid belt, the team was able to classify 85% of the asteroid into about six families, each named after the biggest object in the family. They are Vesta, Flora, Nysa, Polana, Eulalia, and Hungaria. In 2011, NASA’s Dawn spacecraft visited Vesta.

“I wouldn’t be surprised if we eventually trace the origins of all asteroids in the main asteroid belt, not just those in the inner belt, to a small number of known parent bodies,” Dermott said.

The other 15 percent may also trace their origins to the same group of primordial bodies. What astronomers had previously thought of as ‘non-family’ asteroids were likely part of one of the six families, as well — just that they had become estranged due to the gravitational pull of Jupiter or Saturn, which changed their orbits ever so slightly.

The team only analyzed 200,000 asteroids, all found in the inner asteroid belt, which is closer to Earth and more studied than the middle or outer asteroid belt. A NASA survey tracked over 780,000 asteroids in the belt as a whole. This means there’s a lot of room to learn about asteroids. Perhaps there are more families, for instance. What’s more, there’s a similar ongoing analysis, only this time of meteorites, which are the bits of asteroids that survive atmospheric entry and reach Earth. This kind of information could prove essential to protecting the Earth and ourselves from killer asteroids of the kind that wiped out the dinosaurs.

“These large bodies whiz by the Earth, so of course we’re very concerned about how many of these there are and what types of material are in them,” Dermott said. “If ever one of these comes towards the Earth, and we want to deflect it, we need to know what its nature is.”