Shoutout to the Opportunity rover for signaling home amid the worst Martian sandstorm it’s ever faced. 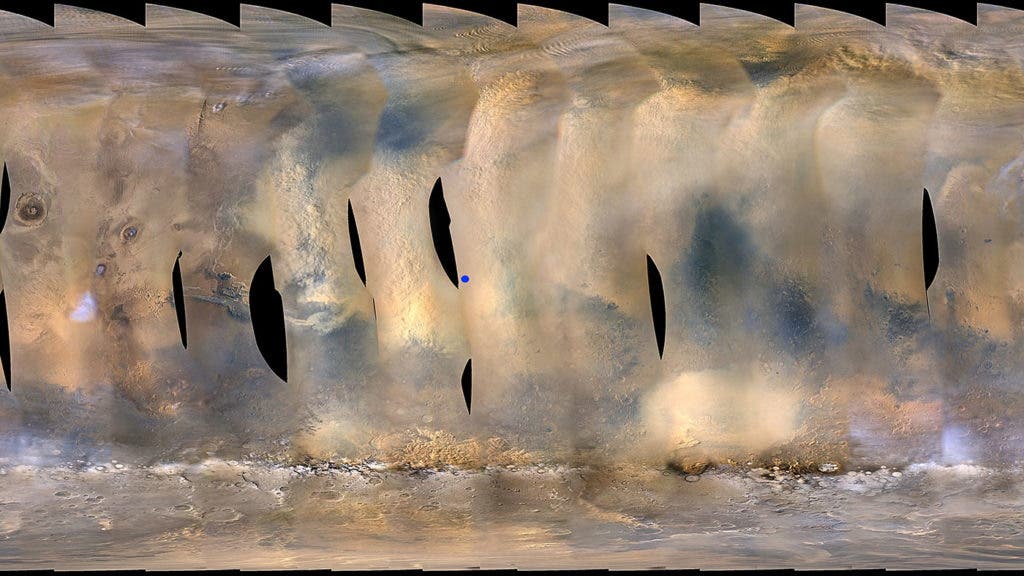 This global map of Mars shows a growing dust storm as of June 6, 2018. The map was produced by the Mars Color Imager (MARCI) camera on NASA’s Mars Reconnaissance Orbiter spacecraft. The blue dot indicates the approximate location of Opportunity.
Image and caption credits NASA/JPL-Caltech/MSSS.

On Sunday morning, NASA received a transmission from the Opportunity rover. Usually, that’s not really out of its character — but the bot is currently braving a massive sandstorm on the Red Planet. The rover hailed home to let ground control know it still has enough juice in its battery to maintain communications, according to NASA. Science operations, however, remain suspended in a bid to conserve energy.

The transmission was a welcome break for NASA engineers, as the dust storm has been steadily picking up steam in the past few days. The rover is weathering it out in Perseverance Valley, shrouded in perpetual night. NASA’s Mars Reconnaissance Orbiter first detected the storm on Friday, June 1. The rover team began preparing contingency plans soon afterward.

It’s not the first such storm Opportunity had to face — it braved another in 2007. This event, however, is much worse than the last one. The storm’s atmospheric opacity (how much light it blocks) has been estimated at 10.8 tau as of Sunday morning — the 2007 storm only reached about 5.5 tau. This is roughly equivalent to the incredible smogs we’ve seen in China. Because of this, the bot cannot use its solar panels to recharge.

The storm has grown to over 18 million square kilometers (7 million square miles) since its detection. Such storms aren’t extreme for Mars, but they are infrequent. NASA doesn’t yet fully understand how they form or build in strength, but they seem to be self-reinforcing — a feedback loop that amplifies itself as it grows. Such storms can last up to several months at a time.

This dust blanket could be what makes or breaks Opportunity’s resolve.

Dusty but not yet dead 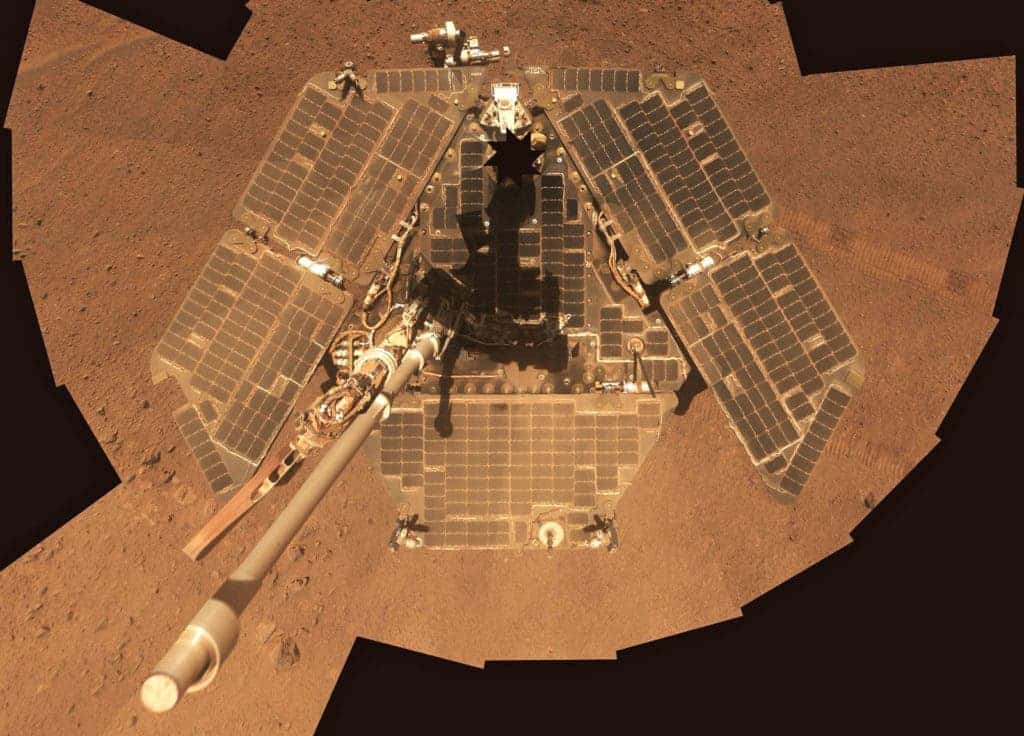 You could say it’s an Opportunity to show what you’re made of, little rover!
Image credits NASA/JPL-Caltech/Cornell Univ./Arizona State Univ.

I say that because the dust is both a boon and a curse for Opportunity as of now. The rover’s main problems are that it cannot recharge (its solar panels are dusted over, and there’s not enough sunlight) and that communication with ground control is spotty at best (radio signals can’t pierce through the storm).

But the dust also hides a silver lining. Data beamed back by the rover shows its internal temperature is roughly stable at about minus 29 degrees Celsius (minus 20 Fahrenheit). The dust storm — which retains heat — seems to be insulating Opportunity from the extreme temperature swings on Mars’ surface. It’s not an ideal temperature by any means, but it’s still not as bad as it could get.

The team’s worst fears right now is that if the rover experiences cold temperatures for too long, it might damage its batteries. This fate befell Spirit, Opportunity’s twin craft in the Mars Exploration Rover mission, in 2010. Engineers plan to use the network to monitor and administer the rover’s energy levels in the following weeks — they need to somehow save as much battery charge as possible while keeping the rover from getting too cold. It has onboard heaters for this purpose, but they drain a lot of energy. One idea the team is considering is activating other equipment to expel energy, which would heat up the bot.

Science operations have been temporarily put on hold for sunnier days. Mission control has requested additional coverage from NASA’s Deep Space Network, a global system of antennas that talks to all the agency’s deep space probes, in an effort to maintain contact with Opportunity.

But I wouldn’t count Opportunity out just yet. It has proved its mettle aplenty in the past. Not only has it gone through dust storms before, but it made it with surprising gusto — the rover has accrued 15 years in the line of duty despite only being intended to last 90 days.

So hang in there little buddy, and don’t let the cold bite your batteries.