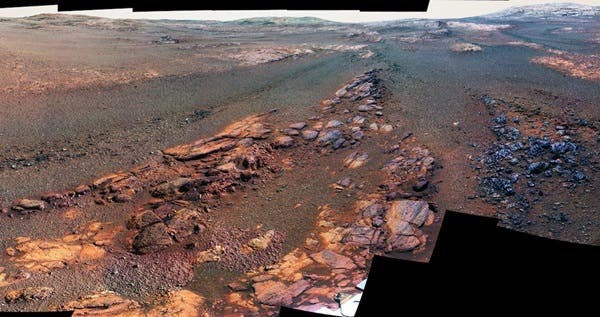 A zoomed-in section from Opportunity’s 360-panorama — the last image that the rover beamed back before it shut down for good. Credit: NASA.

In June, 2018, a huge dust storm engulfed much of Mars, including the solar panels of the Opportunity rover. NASA’s Opportunity mission had been operating on the red planet for 15 years — a long journey with numerous perils and challenges. However, this particularly intense storm proved to be too much even for Opportunity and after many months of trying to communicate with the rover, NASA engineers officially ended the mission. But before its batteries ran out completely, Opportunity beamed back its very last photo.

“Oppy” took this panorama just before the Martian storm unleashed its fury. It was taken from the rover’s final resting place, a system of shallow troughs ironically called Perseverance Valley.

In the 360-degree picture — which was made by stitching 354 individual images together — you can see an array of interesting geological features, including the Endeavour crater rim and rocky outcrops. For a full, zoomable version of the panorama visit NASA’s website. 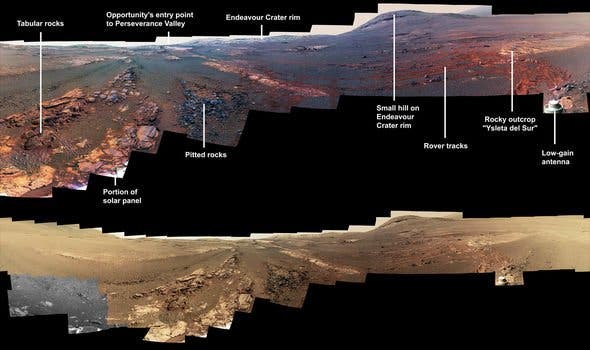 The last panorama picture that Opportunity made. Check out full version at NASA’s website.

“This final panorama embodies what made our Opportunity rover such a remarkable mission of exploration and discovery,” said Opportunity project manager John Callas of NASA’s Jet Propulsion Laboratory in Pasadena, California. “To the right of center you can see the rim of Endeavor Crater rising in the distance. Just to the left of that, rover tracks begin their descent from over the horizon and weave their way down to geologic features that our scientists wanted to examine up close. And to the far right and left are the bottom of Perseverance Valley and the floor of Endeavour crater, pristine and unexplored, waiting for visits from future explorers.”

To capture each individual image in the 360-panorama, the rover used its Panoramic Camera (Pancam) between May 13 and June 10, 2018. Most of the panorama was shot using three filters in order to obtain full-color images. However, some of the images, such as those in the bottom left, were taken during the rover’s final days. As the solar panels became covered in dust, Oppy didn’t have enough power to capture these very last images in green and violet filters, which is why some portions are black and white.

Although Opportunity’s mission is over, the rover’s legacy endures through the invaluable science it has enabled but also in the hearts of people around the world.

“Opportunity’s scientific discoveries contributed to our unprecedented understanding of the planet’s geology and environment, laying the groundwork for future robotic and human missions to the Red Planet.”