We’ve kept you up to date with New Horizon’s progress, and the pictures it took of Pluto; now, after 10 years and 3 billion miles, the shuttle will pass close to Pluto – only 7,800 miles away from it. 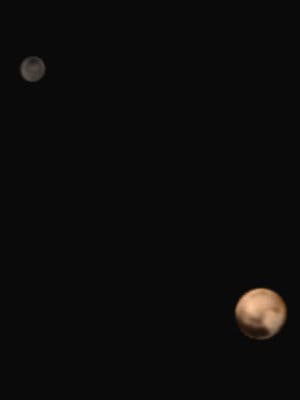 The dwarf planet was discovered in 1930 and was originally considered the ninth planet from the Sun. Its status as a planet fell into question following further study of it and the outer Solar System over the following 75 years. After all these years, on 14 July 2015, the New Horizons probe will fly by Pluto, become the first spacecraft to ever do so. The goal of the mission is to understand the formation of the Pluto system, the Kuiper Belt, and the transformation of the early Solar System – yes, we can learn clues about all of those by studying Pluto.

The spacecraft will study the atmospheres, surfaces, interiors and environments of Pluto and its moons. It will also study other objects in the Kuiper Belt and keep an eye out for other interesting developments. The belt “contains a very large number — probably billions — of comets, and potentially other small worlds, perhaps even ones as large as Pluto.

But this is no easy feat. Pluto is so far away that it takes information four and a half hours to get from the spacecraft to Earth.

“From Earth to Pluto, where our spacecraft is, is going to be about 4 ½ hours,” says Alice Bowman, the Mission Operations Manager of New Horizons. “So the information that we’re receiving right now was sent 4 ½ hours earlier.”

This doesn’t only cause a lag in information sending, it also means that scientists can’t control New Horizons in real time – they designed in such a way that it adapted to problems and managed mostly by itself.

“No operator can sit on Earth and use a joystick to control where the spacecraft is looking or taking observations,” Bowman says. “Pretty much you have to make a very smart spacecraft.”

The stakes are high. We talk about Pluto a lot, but if we wrote all the specific data we know about it, we probably couldn’t even fill a piece of paper. This is basically the first serious look at an unexplored part of our solar system, and during the 9 days, New Horizons will make over a thousand scientific observations. Its scientific instruments will probe Pluto for evidence of its composition, terrain and atmosphere.