Nine years and three billion miles later, NASA’s New Horizon probe awoke once it neared a strip close to Pluto. The probe was kept in hibernation for more than two thirds of its trek and will is soon expected to finally explore the dwarf planet and, most importantly, the world that surrounds it – the Kuiper belt. It’s the farthest any spacecraft has gone to reach its primary target. 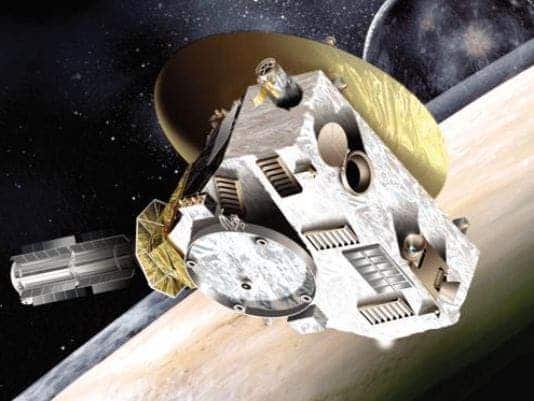 “This is a watershed event that signals the end of New Horizons crossing of a vast ocean of space to the very frontier of our solar system,” said Alan Stern, New Horizons principal investigator from Southwest Research Institute.

New Horizon launched from Earth on January 19, 2006 and since then has traveled  2.9 billion miles, passing by all the planets in our solar system the most recent of which was Neptune, in August. During the 1,873 days since it embarked on its epic journey, the probe has been mostly kept asleep to preserve instruments integrity and prevent any failures. The hibernation was intermittent however, as the probe was briefly awoken 18 times to check its status only for engineers to put it back to sleep for periods ranging between 36 and 202 days. Nearing the end of its journey, the probe is just 162 million miles from Pluto. 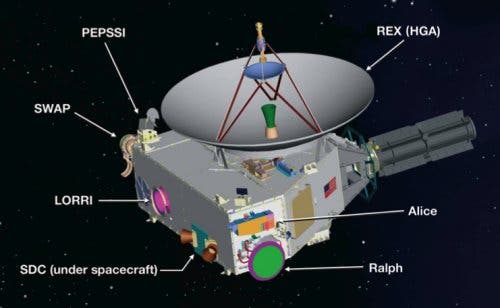 The image shows where the probe’s instruments are positioned. Credit: NASA

Today, at 9:53 p.m. EST, engineers at the John Hopkins University Applied Physics Laboratory awoke New Horizon once again for its longest expected period of activity, reporting all systems all in perfect order. The team tested infrared and ultraviolet imaging spectrometers, a compact multicolour camera, a high-resolution telescopic camera, two powerful particle spectrometers and a space dust detector. Scientists were a bit tense with expectation, however, since at such a vast distance it takes 4 hours and 26 minutes for the signal to transit between New Horizons and the NASA Deep Space Network in Canberra, Australia.

“Technically, this was routine, since the wake-up was a procedure that we’d done many times before, said New Horizons project manager Glen Fountain. “Symbolically, however, this is a big deal. It means the start of our pre-encounter operations.”

Why this probe is important

So, what’s this big deal all about? Near the very outer edge of our solar system, Pluto, its moons and the mysterious Kuiper belt are very poorly understood. During its mission, New Horizon will beam back exclusive photos and chemical signatures, impossible to read at this level of detail with other instruments like the Hubble Telescope.

Pluto has five moons: Charon, Hydra, Nix, Kerberos and Styx. But just so you can get an idea of how blurry our view of Pluto is, one of its satellites, Styx, was only discovered a few years ago.

New Horizons’ flyby of Pluto happens on July 14, 2015 at 11:50 UT, but it will begin gathering science data in January and will not finish returning all of the data until late 2016. Because it will be traveling so fast, nearly all of the most important goals for the mission are met in the time from 2.5 hours before to 1 hour after closest approach. The Pluto mission is divided into several phases:

Once it’s finished here, New Horizon will visit one or more Kuiper Belt Objects beyond Pluto. Here the probe will find objects believed to be representative of the material which condensed to form the other planets.  Their growth into full sized planets was arrested early in the history of the solar system.  Hence they hold clues about the distant past of the solar system and the chemical endowment of all the planets including our Earth. In the belt, there are billions of objects with a diameter greater than 10 km.