Racing at a pace of about a million miles per day, the New Horizon craft is getting closer to Pluto and so are the pictures it’s beaming back. Previously, we’ve shown you the first colored pics of Pluto taken by New Horizon, and its moons. Some of you were disappointed when you got to see only a couple of pale pixels, so this latest shot taken just this morning might be more exciting to watch.

The closest shot of Pluto made by New Horizon yet. Image: NASA

This time you can clearly distinguish Pluto and its largest moon Charon. And if you raise the brightness of your display a couple of notches, you’ll be able to distinguish its other two moons, Hydra and Nix. If you’re wondering what’s with the star-trails, here’s an explanation from NASA:

“This image contains one or more objects whose brightness exceeds the detector’s saturation level. This sometimes produces a “tail” of bright and/or dark pixels to the right of the object. You may also notice a faint vertical white stripe passing through the saturated object; this is an artifact called “frame transfer smear” and is associated with the incomplete removal of signal produced when the image is transferred from the optically active region of the detector to the storage region of the detector. If the target is badly saturated, you may also notice a faint, X-shaped feature nearly centered on the object; these are optical diffraction spikes. 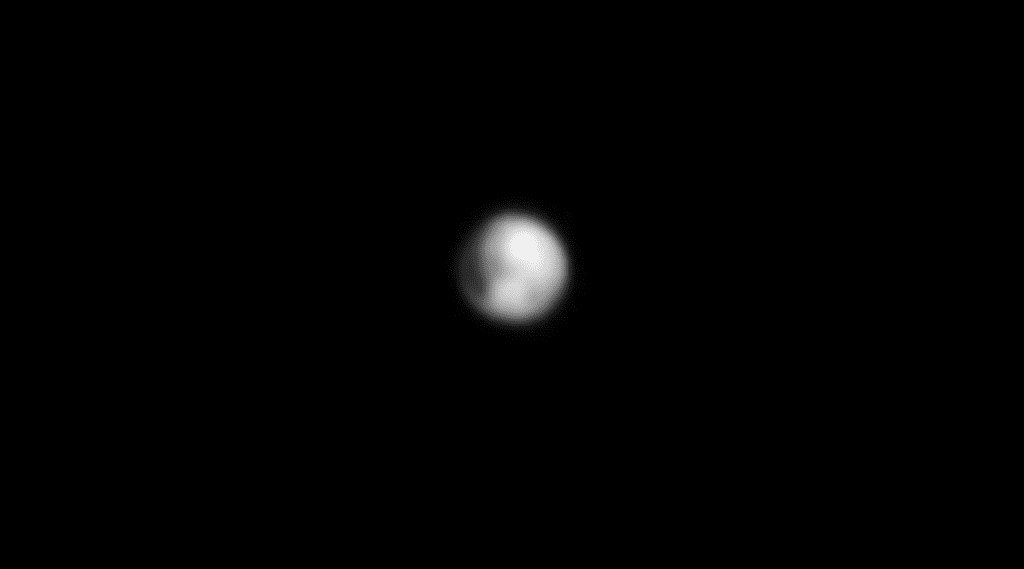 This image contains one or more streaks associated with cosmic rays passing through the detector. Nearly every LORRI image has at least one cosmic ray strike, but most are “single pixel” events (i.e., they only appear to be in single pixel and can easily be mistaken for stars). But sometimes a cosmic ray is energetic enough that it leaves a “trail” as it passes through the LORRI detector.”

Just imagine in three short weeks New Horizon will be close enough to make a flyby past Pluto. I can’t even fathom the level of detail we’ll get to see. But that’s another story, and you can be sure ZME Science will report the first pics as they come out.

7 thoughts on “Here’s our closest image of Pluto so far, taken just this morning”