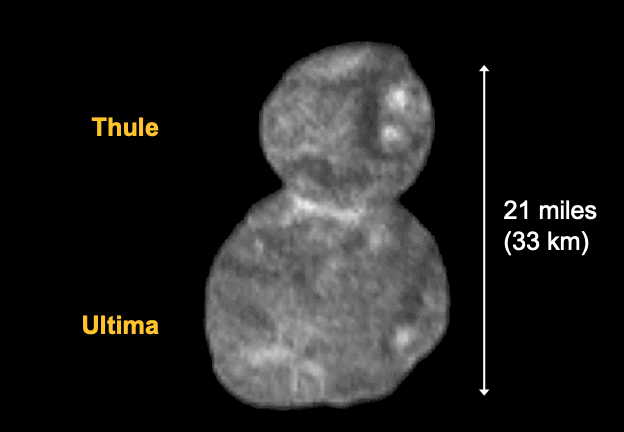 NASA’s New Horizons probe has radioed back a strikingly clear photo of a small, icy world called Ultima Thule. The object, which is one of the farthest we’ve ever identified, was encountered by the spacecraft a staggering 6.5 billion kilometers from Earth.

Previous observations of Ultima Thule weren’t very clear and had been open to interpretation. The new image, however, rather plainly shows that Ultima Thule looks like it’s made of two objects joined together, resembling a snowman. Every 15 hours, Ultima Thule completes a full rotation.

The encounter with Ultima Thule (which roughly translates as “beyond the borders of the known world”) has set the record for the most distant exploration of an object in the solar system. The previous record was also set by New Horizons during its flyby of the dwarf planet Pluto in 2015.

The larger spherical object is called “Ultima” while the smaller one is called “Thule”. The volume ratio between the two is approximately three to one.

The leftmost image shows Ulma Thule’s true color as seen by one of New Horizon’s instruments. The righthand image is a combination of the color and black&white (center) observations. Credit: NASA/JHU-APL/SWRI.

According to New Horizons engineers, the brightest areas of Ultima Thule reflect just 13% of the incoming light that falls on them. To get a sense of how dark the object is, that’s a brightness similar to potting soil. Its color is mostly red, though, according to Carly Howett from the Southwest Research Institute (SwRI). This color is likely owed to the fact that the icy object was irradiated by high-energy cosmic rays and X-rays over billions of years.

NASA scientists think that the two spherical objects that make the Ultima Thule planetesimal — the basic building block of planets– likely coalesced around the time the solar system’s planetary bodies formed, about 4.6 billion years ago. As such, the icy object could offer clues as to how exactly Earth and other planets and moons in the solar system formed.

The best picture so far of the planetesimal, featured in the first half of this article, was taken while New Horizons was only 28,000 km above it. However, the probe has come even closer to Ultima Thule since that flyby, and NASA expects a picture with five times the resolution to reach their servers in February when the next downlink is scheduled.

To celebrate the milestone, Dr. Brian May — the lead guitarist of the band Queen, also an astrophysicist working directly with the New Horizons mission — wrote a song inspired by Ultima Thule. During a press conference, May told journalists that the song is about the human sense of adventure and discovery.

“Gradually it dawned on me that this mission is about human curiosity,” May said. “It’s about the need of mankind to go out there an explore and discover what makes the universe tick and this has been going on since the dawn of time.”