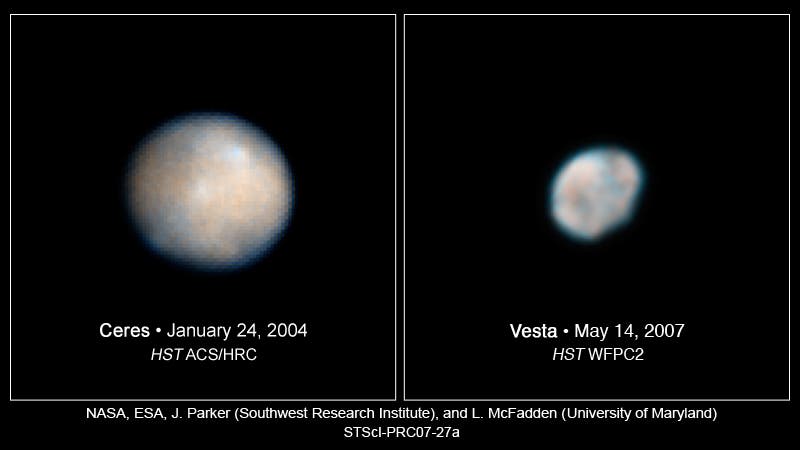 Hubble Space Telescope images of Vesta and Ceres show two of the most massive asteroids in the asteroid belt, a region between Mars and Jupiter. Credits for Vesta: NASA, ESA, and L. McFadden (University of Maryland) Credits for Ceres: NASA, ESA, and J. Parker (Southwest Research Institute)

After a four year journey, NASA’s Dawn spacecraft will finally reach the orbit of Vesta, the second largest asteroid in our solar system.

The object, located 117 million miles from Earth and spanning across a circumference of 329 miles, will be visited in premiere by Dawn this weekend when the latter will hover over on July 16. For whoever’s interested, the exact time is 1:00 a.m. EDT.

“It has taken nearly four years to get to this point,” said Dawn project manager Robert Mase of NASA’s Jet Propulsion Laboratory in a press release. “Our latest tests and check-outs show that Dawn is right on target and performing normally.”

The target in question is located in an asteroid- rich filled zone, in between the  solar system’s inner and outer planets. Propulsion and navigation had been powered by Mars’ gravitational force and Dawn’s own ion-powered thrusters. Once the spaceship reaches Dawn, it’s scheduled to hover about 9,900 miles above the asteroid’s surface for a whole year and, in this time, use two different cameras, a gamma-ray detector and a neutron detector to study and map the object. After this part of the mission is over, next July, Down’s ion thrusters will catapult the spaceship out of orbit and towards the dwarf planet Ceres, the largest object in the Asteroid Belt.

Meanwhile, NASA has another asteroid mission running, spearhead by the Osiris-Rex spacecraft, which is supposed to land and collect samples from a near-Earth asteroid, before returning home to Houston by 2023.

Very little is know about both Vesta and Ceres, although a lot of theories are currently emitting suppositions. Vesta maybe once had a molten core before going cold after a few million years, while Ceres, some believe, may have an icy mantle and active mud volcanoes.