NASA is preparing to send a drone to Mars by 2024 – they’ve already developed a small, lightweight craft that could conduct aerial surveys and identify potential landing areas and zones of interest. 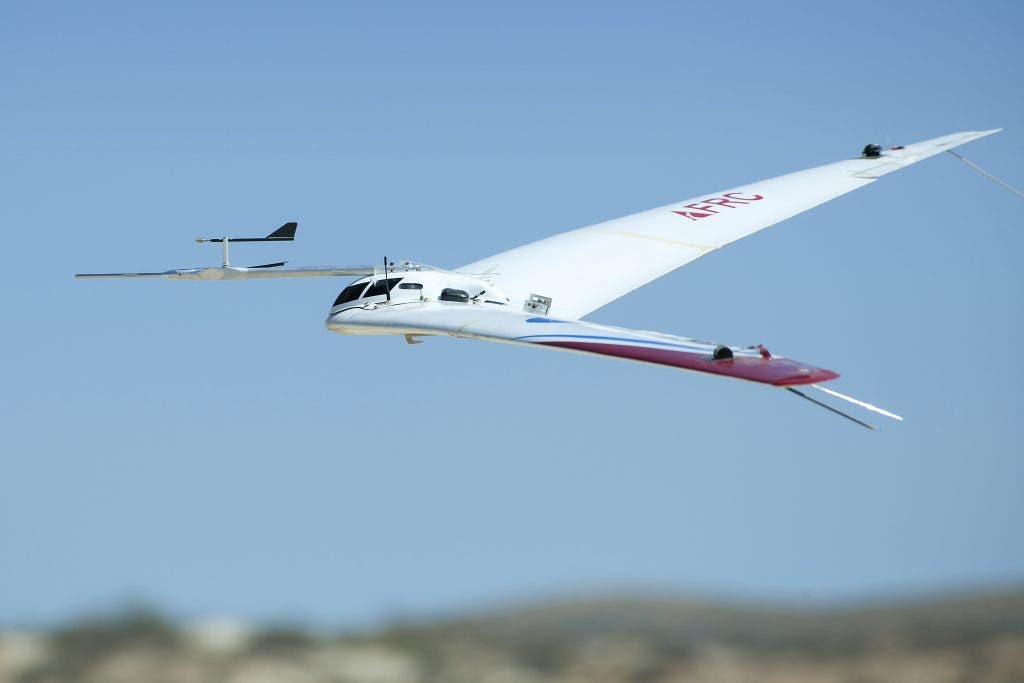 The proposed Prandtl-m is based on the Prandtl-d seen coming in for a landing during a flight test in June. The aerodynamics offer a solution that could lead to the first aircraft on Mars.
Credits: NASA Photo / Ken Ulbrich

In case you’re wondering, no, this is not a cool boomerang, it may be the first aircraft that flies in the Martian skies (that we know of, at least). NASA has revealed that they have almost finished a prototype for a glider/plane that they will launch later this year. The Prandtl–m will be released at about at 100,000 feet altitude, which will simulate the flight conditions of the Martian atmosphere, said Al Bowers, NASA Armstrong chief scientist and Prandtl-m program manager.

“The aircraft would be part of the ballast that would be ejected from the aeroshell that takes the Mars rover to the planet,” Bowers said.” It would be able to deploy and fly in the Martian atmosphere and glide down and land. The Prandtl-m could overfly some of the proposed landing sites for a future astronaut mission and send back to Earth very detailed high resolution photographic map images that could tell scientists about the suitability of those landing sites.”

“The actual aircraft’s wingspan when it is deployed would measure 24 inches and weigh less than a pound,” Bowers added. “With Mars gravity 38 percent of what it is on Earth, that actually allows us up to 2.6 pounds and the vehicle will still weigh only 1 pound on Mars. It will be made of composite material, either fiberglass or carbon fiber. We believe this particular design could best recover from the unusual conditions of an ejection.” 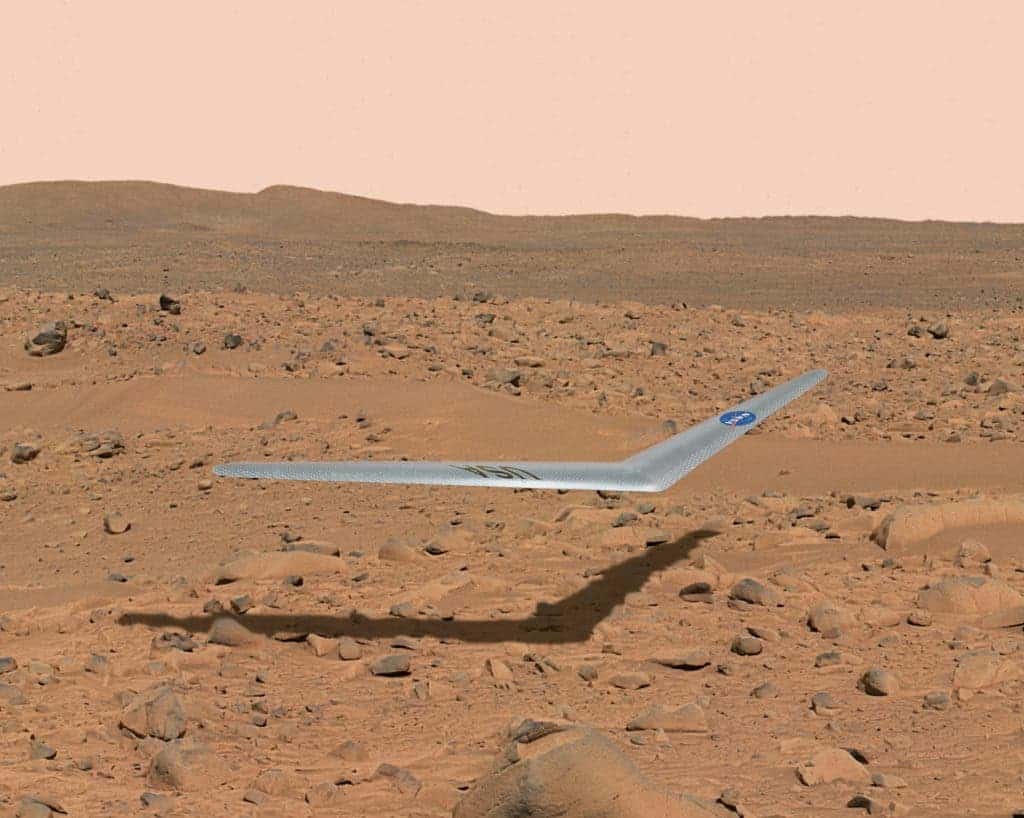 This illustration shows what a Prandtl-m might look like flying above the surface of Mars.
Credits: NASA Illustration / Dennis Calaba

The tests are crucial because no matter how many theories and models you make, you can never really be sure how the device will react until you actually place it in the right conditions. The tests will also reveal what modifications and improvements should be made.

The goal is to get the drone to Mars by 2022-2024 by having it piggyback the aeroshell/Mars rover stack that NASA has planned.

After it gets in the Martian atmosphere, the aircraft could simply detach and take off.

“It would have a flight time of right around 10 minutes. The aircraft would be gliding for the last 2,000 feet to the surface of Mars and have a range of about 20 miles,” Bowers said.

NASA is employing the help of several students and professionals from related fields, in a truly admirable multidisciplinary effort. 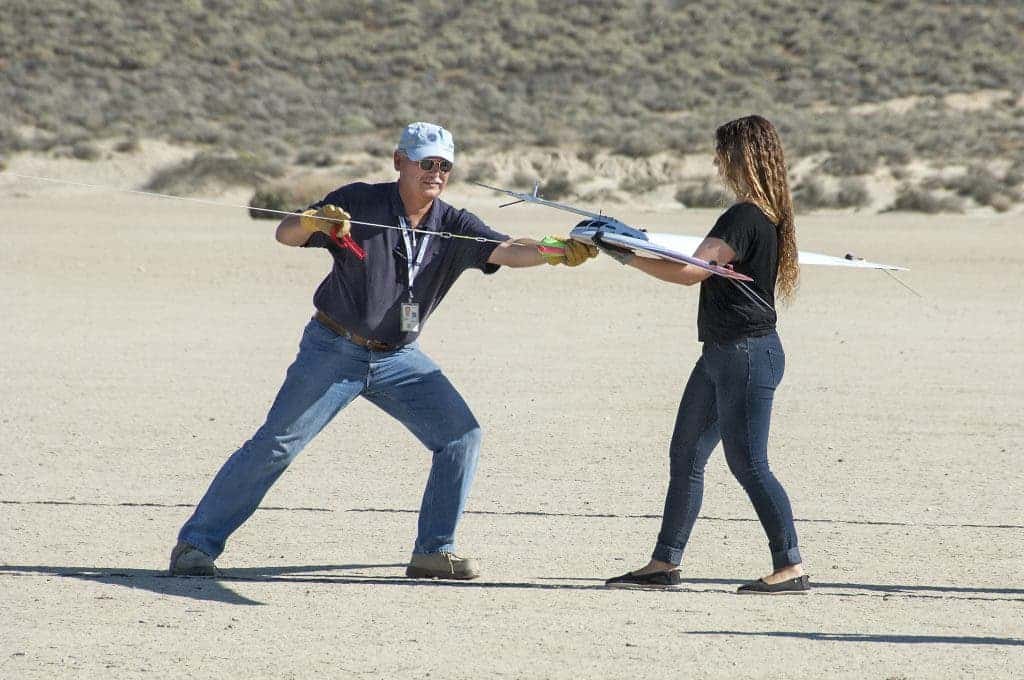 “We have a number of summer community college students coming that are going to help us design and build the aircraft that will complete the first phase of the mission,” Bowers said. “We’re going to build some vehicles and we are going to put them in very unusual attitudes and see if they will recover where other aircraft would not. Our expectation is that they will recover. As soon as we get that information, we will feel much better flying it from a high-altitude balloon.”

In fact, this idea was inspired by one of Bowers’ friends, Dave Berger, a NASA Armstrong aeronautical engineer who specializes in flow physics and propulsion. They were discussing possibilities for a student project, and came up with the idea of creating a Martian drone.