At the European Planetary Science Conference in Nantes, France, NASA presented some spectacular maps and observations about Ceres, the largest object in the asteroid belt, and the largest of the minor planets within the orbit of Neptune. Astronomers analyzed data coming from the Dawn spacecraft, which entered orbit around Ceres on 6 March 2015. 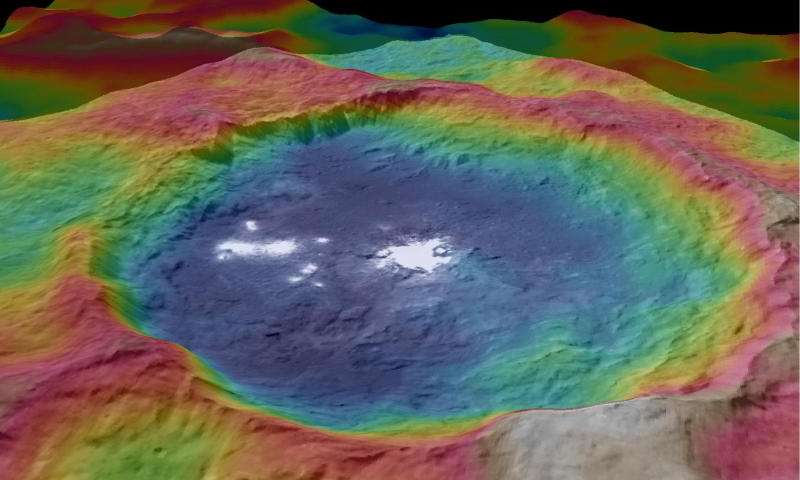 This view, made using images taken by NASA’s Dawn spacecraft, is a color-coded topographic map of Occator crater on Ceres. Credit: NASA/JPL-Caltech/UCLA/MPS/DLR/IDA

“Ceres continues to amaze, yet puzzle us, as we examine our multitude of images, spectra and now energetic particle bursts,” said Chris Russell, Dawn principal investigator at the University of California, Los Angeles. 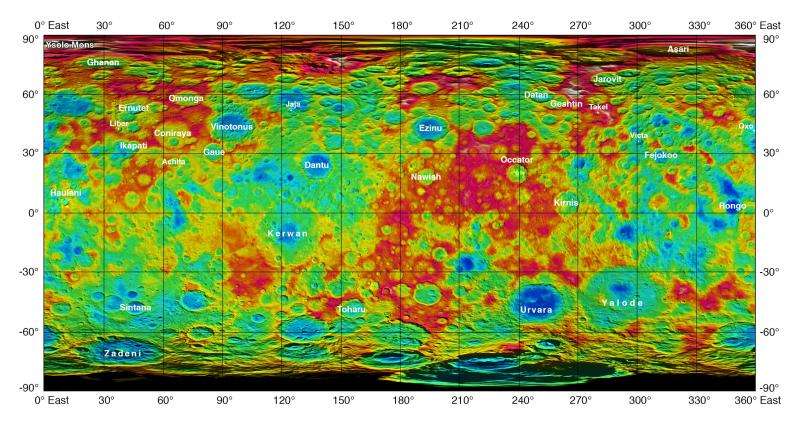 This color-coded map from NASA’s Dawn mission shows the highs and lows of topography on the surface of dwarf planet Ceres – basically a topography map. Credit: NASA/JPL-Caltech/UCLA/MPS/DLR/IDA

For starters, NASA revealed tantalizing (false-color) maps of Ceres which definitely stole the show in Nantes. The maps highlight the compositional differences present on the surface, especially a puzzling, cone-shaped 4-mile-high (6-kilometer-high) mountain which is still an enigma. The mountain, which is now referred to as the Lonely Mountain, was found back in April, and while several theories have been proposed, no satisfying answer has stood out. Dawn’s chief investigator Christopher Russell said:

“We’re having difficulty understanding what made that mountain and we have been getting many suggestions from the public.”

The peculiar shapes of the craters on Ceres are also surprising.

“The irregular shapes of craters on Ceres are especially interesting, resembling craters we see on Saturn’s icy moon Rhea,” said Carol Raymond, Dawn’s deputy principal investigator based at NASA’s Jet Propulsion Laboratory, Pasadena, California. “They are very different from the bowl-shaped craters on Vesta.” Vesta is another large planetoid in the area.

Another unexpected observation was the data coming from the gamma ray and neutron spectrometer on Dawn. The instrument detected three bursts of energetic electrons – these may result from the interaction between Ceres and the Sun’s radiation, but that’s also not confirmed.

“This is a very unexpected observation for which we are now testing hypotheses,” Russell said.

Observations made on Ceres suggest that it has a differentiated body, a rocky core overlain with an icy mantle. This 100-kilometer-thick mantle (23%–28% of Ceres by mass) contains up to 200 million cubic kilometers of water, which would be more than the amount of fresh water on Earth. This result is supported by the observations made by the Keck telescope in 2002 and by evolutionary modeling, and Dawn observations are also consistent.

Dawn became the firsts mission to ever reach a dwarf planet, arriving at the planetoid on March 6, 2015, after it conducted measurements on March 6, 2015. Currently, Dawn is orbiting Ceres at an altitude of 915 miles (1,470 kilometers); it will conduct several full orbits, each of which will last 11 days.