With today’s propulsion tech, it takes at least 1.5 years for a manned crew to reach Mars, and at least as much to get back – provided there will be a return mission. There’s only so much that can fit in a spacecraft, and besides the supplies astronauts need for the long trip, there’s precious cargo that’s required to sustain the mission on site like construction materials, lab equipment, food and so on. Remember the last time you went camping? Well, this time we’re headed to another planet and forgetting about toiler paper is the least of your worries. But when NASA handles logistics, you know things are tight to the last bolt. Sometimes, outside help and fresh minds are more than welcome, which is why the space agency held a very interesting competition called the  3D-Printed Habitat Challenge Design Competition which awards the most innovative, but practical designs of habitats on Mars. 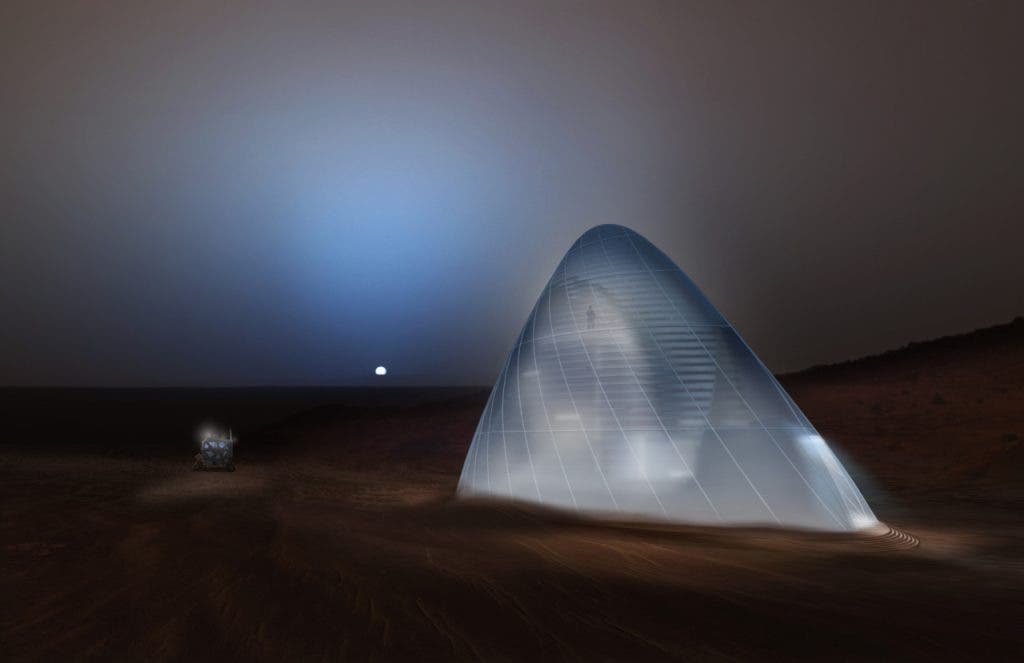 The key here is 3D printing and sourcing materials on site. It’s important that the first pioneers there build as many objects as possible on location, using 3D printers since it drastically reduces the load of ferrying cargo for millions of miles. First prize and $25,000 went to  Team Space Exploration Architecture and Clouds Architecture Office for the stunning  “Mars Ice House” – a ribbed structure supporting a pyramid made out of Martian ice which shields inhabitants from the radiation. Since Mars doesn’t have a magnetic field, even though it’s farther from the sun, the radiation levels at the surface are higher than on Earth.

“The innovative structure draws on the abundance of water and persistently low temperatures in Mars’ northern latitudes to create a multi-layered pressurized radiation shell of ice that encloses a lander habitat and gardens within. A unique 3D printing technique harnesses the physics of water and its phase transition to construct ICE HOUSE,” says the Team Space Exploration Architecture and Clouds Architecture Office. 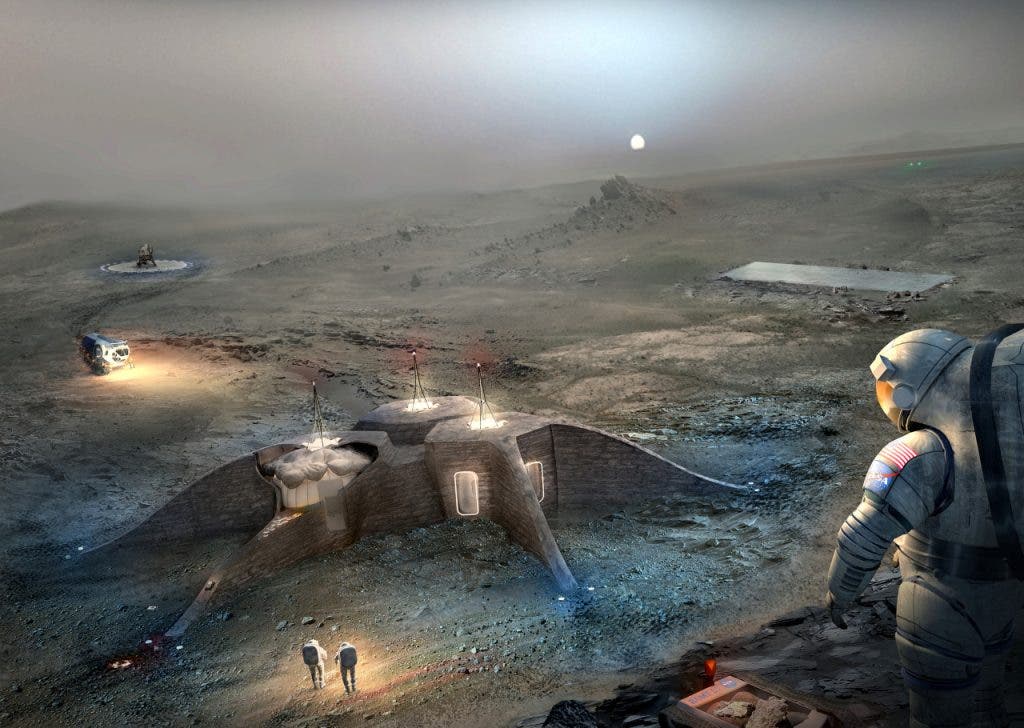 Second place and $15,000 went to Team Gamma for their design of an modular, inflatable habitat. A  semi-autonomous multi-robot regolith additive manufacturing (RAM) system is used to create a protective in situ shield around a modular inflatable hab. This design may be the most practical since it allows head room for the vile uncertainties of such a mission. A lot of things might go wrong, but if you have a properly built modular design, you know there’s shelter at least. Oh, and oxygen. 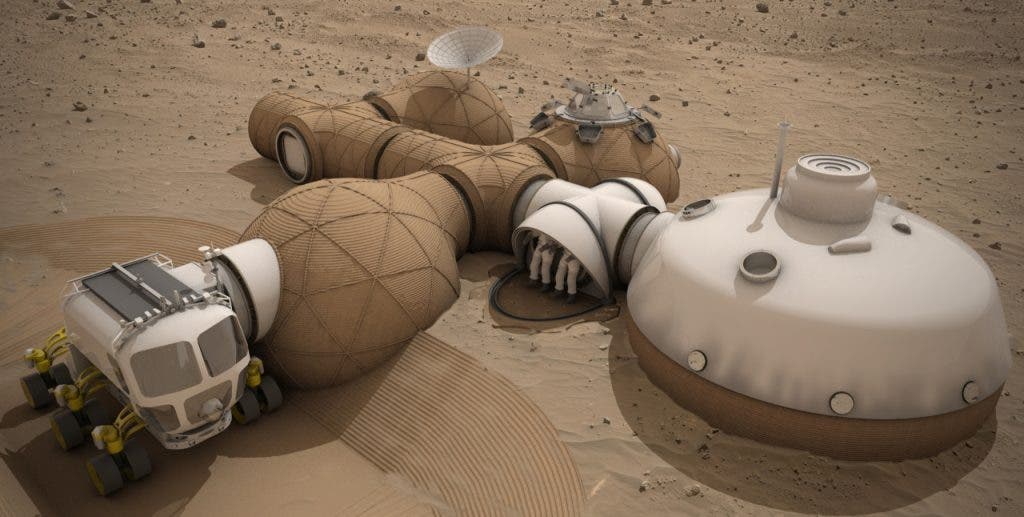 Third place, and sadly no cash, went to Team LavaHive, another modular design  which uses the  ‘lava-casting’ construction technique. It also uses recycled materials from the landing craft.

“Our design incorporates usually discarded components as a key element of the habitat concept. The back shell of the Entry, Descent and Landing (EDL) system that will deliver the construction rovers will be used for the primary habitat roof, with an inflatable module underneath as the primary living habitat. Using the readily available Martian regolith, two rovers will use a combination of sintering and ‘lava-casting’ to build connecting corridors and sub-habitats around the main inflatable section. These sub-habitats will then be fitted, sealed internally with epoxy and furnished as a research area, workshop or greenhouse depending on the mission design.”

A total of 165 designs were submitted for the contest. You can see a complete list here. 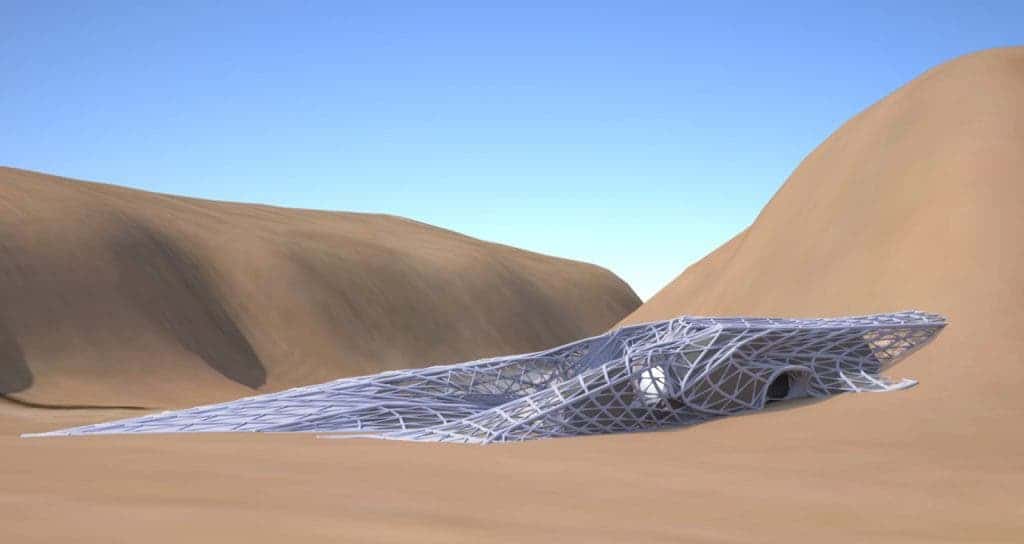 “As human influence reaches into new worlds, we must consider the impact of a neo-native species inhabiting a distant planet. We can create a shelter reminiscent of our earth-bound dwelling to remind us of our origins and to replicate the human ideology, or we can create a living shell that responds to its environment and pushes the limitations of not only what we know but who we are. The 3D printer of the future will be capable of scanning surrounding geology to create an adaptation of local environmental conditions based on thermal and solar requirements, soil characteristics, wind patterns, radiation hazards, and structural foundation requirements. Combining these inputs with the habitat’s programming requirements provides a platform to allow the printer to adjust the design prior to printing the habitat. While the interior layout and ergonomics are relatively stable, both the shell and interior forms can be designed mathematically. The habitat is designed to be printed as a single form.” 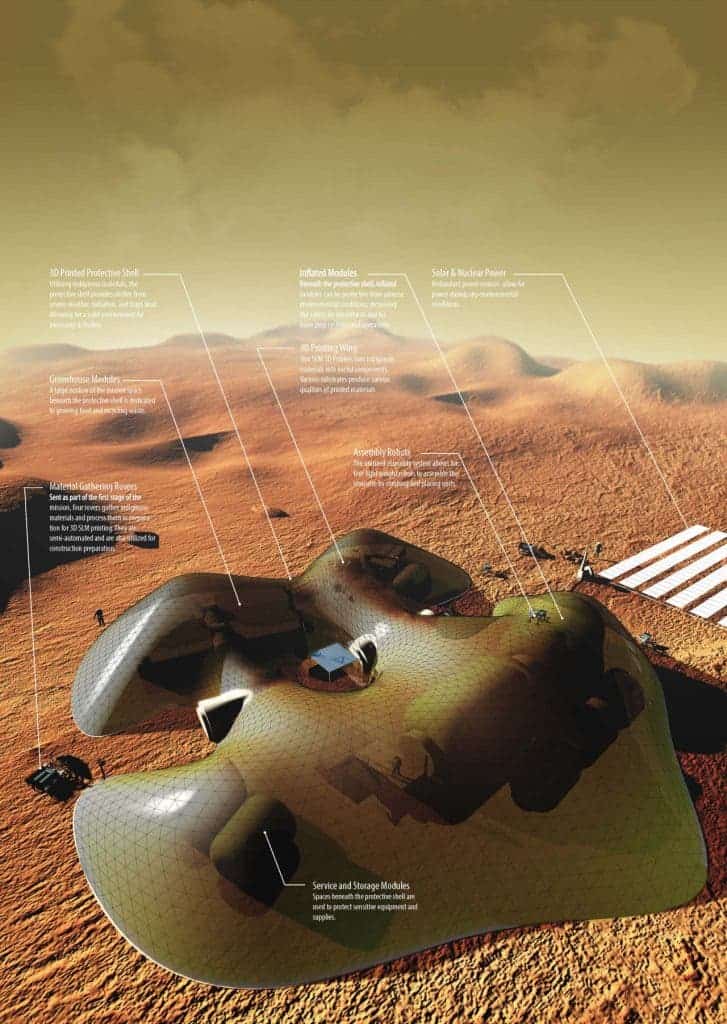 “The vaulted structure is adaptable to a range of geographical conditions and habitat sizes through an open-platform 3D printed modular construction and fabrication system. The approach is modularized into separate upgradable stages: Material Prep, Fabrication, and Assembly, converting regolith into high strength glass panels.” 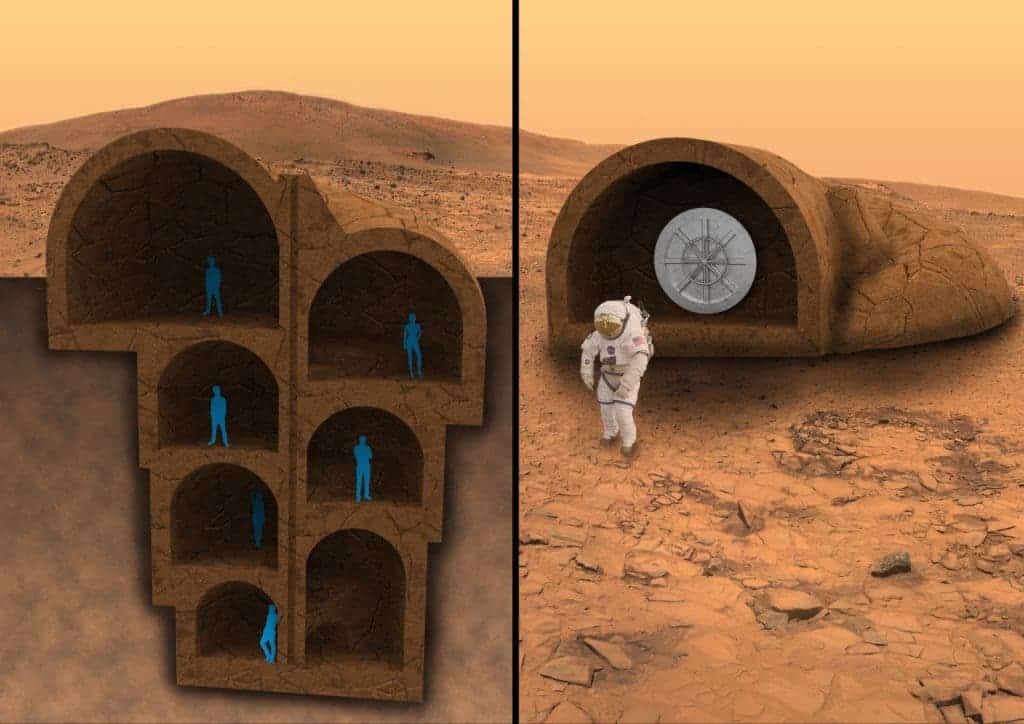 “The RedWorks Habitat has been adapted from construction principles of ancient cultures, such as pit houses and pueblos as well as natural constructs like the shell of the nautilus. By 3d printing up from the base of an excavation pit, the Habitat is able to use regolith as an in-situ building material and as a protective barrier from the elements. The internal structure is divided into levels that revolve around a central support shaft like a spiral staircase. The levels serve as a modular design for living space, with each level configured for a specific need. Furthermore, by using organic generative algorithms the shelter’s basic layout can be adapted to produce a suitable structure around existing geological constructs, opening up areas for expanded settlement.”