Astronomers have discovered the most distant quasar known so far, dubbed ULAS J1120+0641, powered by a supermassive black hole with a mass 2 billion times that of our sun – it’s also the brightest object in the known Universe. 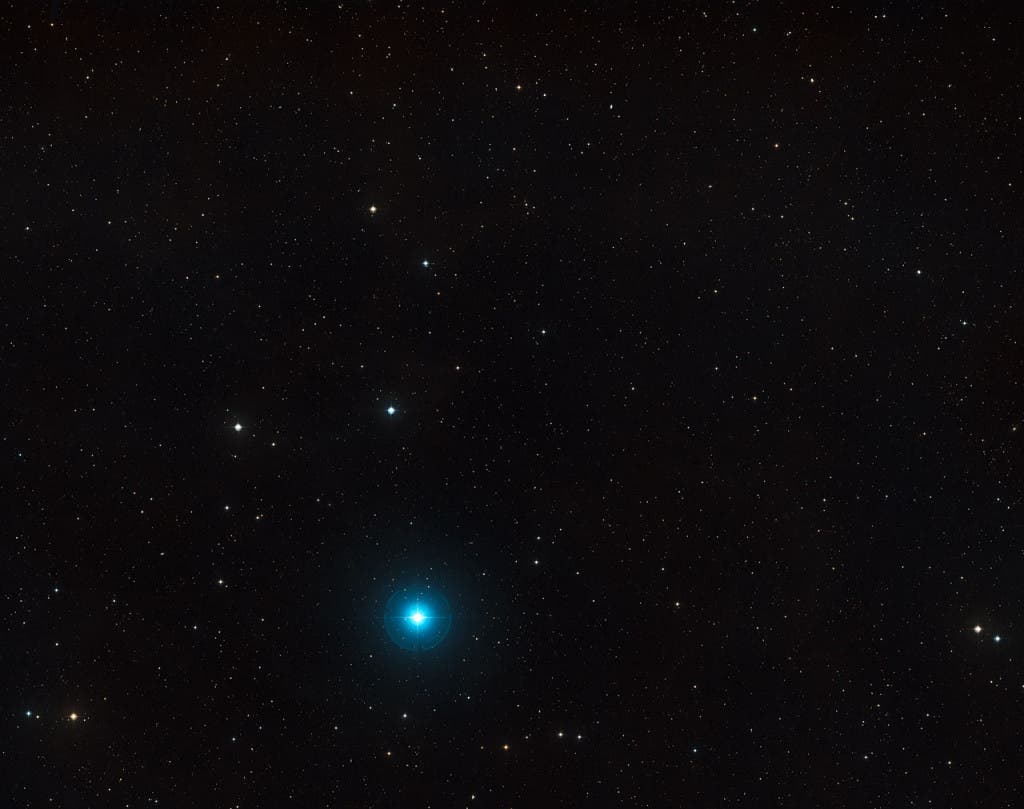 An image taken through red and blue filters of the. The object itself lies very close to the centre and is not visible in this picture, but many other, much closer, galaxies are seen in this wide-field view that spans about three degrees of sky. (c)ESO and Digitized Sky Survey 2. Acknowledgment: Davide De Martin

At a redshift of 7.1, placing it at only 770 million years after the Big Bang, the newly discovered quasar is so far away that its light probes the last part of the reionization era. It’s not the most distant known object in space, though. Other bodies have been found at a larger redshift, such as a gamma-ray burst at redshift 8.2 and a galaxy at redshift 8.6, however this quasar is still hundreds of times brighter than both.  The next most-distant quasar is seen as it was 870 million years after the Big Bang (redshift 6.4).

Because objects such as these are so far away, their light gets stretched by the expansion of the Universe, and the light which eventually reaches Earth falls in the infrared spectrum. ULAS J1120 was discovered by the European UKIRT Infrared Deep Sky Survey (UKIDSS), which uses UK’s dedicated infrared telescope in Hawaii. To find it, astronomers had to dig through data consisting in millions of objects in the UKIDSS database – eventually, their efforts were rewarded.

“It took us five years to find this object,” explains Bram Venemans, one of the authors of the study which will appear in Nature on 30 June 2011. “We were looking for a quasar with redshift higher than 6.5. Finding one that is this far away, at a redshift higher than 7, was an exciting surprise. By peering deep into the reionisation era, this quasar provides a unique opportunity to explore a 100-million-year window in the history of the cosmos that was previously out of reach.”

As far as distance goes, that of the quasar was determined from observations made with the FORS2 instrument on ESO’s Very Large Telescope (VLT) and instruments on the Gemini North Telescope. The instruments split the analyzed light into its most basic colours, from which scientists could read some very important facts. For once, the mass of the black hole at the centre of ULAS J1120+0641 is about two billion times that of the Sun. Which, considering its formation into the early Universe, hits contradicts the current leading theory regarding the growth of supermassive black holes, why says that they grow in mass at a slow build-up as they pull matter from their surrounds.

“We think there are only about 100 bright quasars with redshift higher than 7 over the whole sky,” concludes Daniel Mortlock, the leading author of the paper. “Finding this object required a painstaking search, but it was worth the effort to be able to unravel some of the mysteries of the early Universe.”