A new paper might explain how the Moon got some of its surprising features. 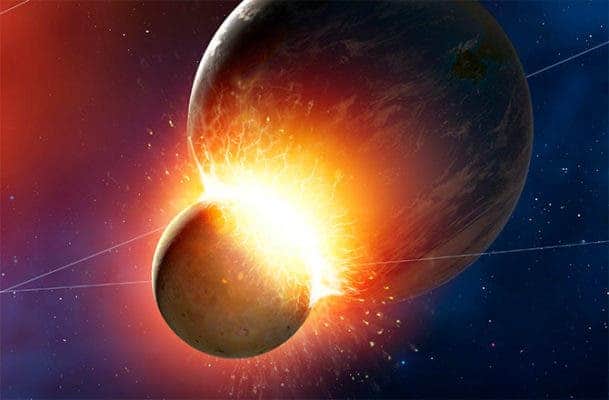 As far as moons go, our own is very peculiar. In fact, it’s one of the strangest planetary bodies in the whole Solar System. It orbits the Earth but at an unusually long distance and with a large orbital tilt. Scientists have yet to come up with a model for the Moon’s formation that explains all of these characteristics. A paper published Oct. 31 in the journal Nature attempts to solve this issue by using numerical models to study the moon’s explosive formation and how it evolved together with our planet.

The model suggests that the Earth was sent spinning much faster, and at a much steeper tilt than it does today. The complex Moon-Earth-Sun interactions in the several billion years after this event allowed many of these changes to revert closer to their original state, resulting in the system we see today. The remaining anomalies, such as the large tilt, are relics of the Moon’s explosive birth.

“Evidence suggests a giant impact blasted off a huge amount of material that formed the moon,” said Douglas Hamilton, professor of astronomy at the University of Maryland and a co-author of the Nature paper.

“This material would have formed a ring of debris first, then the ring would have aggregated to form the moon. But this scenario does not quite work if Earth’s spin axis was tilted at the 23.5 degree angle we see today.”

According to collisional physics, this ring of debris should stabilize on the Earth’s equatorial plane — and thus, the moon’s orbit after formation. As the satellite began to distance itself from the Earth, its orbit should have shifted to the planet’s ecliptic plane — the Earth’s orbit around the Sun. Today however, the Moon is tilted five degrees from this plane.

“This large tilt is very unusual. Until now, there hasn’t been a good explanation,” Hamilton said. ” But we can understand it if Earth had a more dramatic early history than we previously suspected.”

Hamilton and his team tried many different scenarios for how the Moon formed. The one that fit best called for a moon-forming impact which sent the planet spinning almost twice as fast as what other models predict. It also heavily impacted Earth’s tilt, knocking it off to somewhere between 60 and 80 degrees. This high tilt allowed our planet to shake off its excess speed more easily.

It also explains the five degree tilt of the Moon. Because of how the Earth’s axis was shifted during the impact, the Moon couldn’t transition smoothly from our planet’s equatorial to the ecliptic plane. This transition was abrupt, leaving the Moon with a large tilt relative to the former — one much larger than what we can see today. 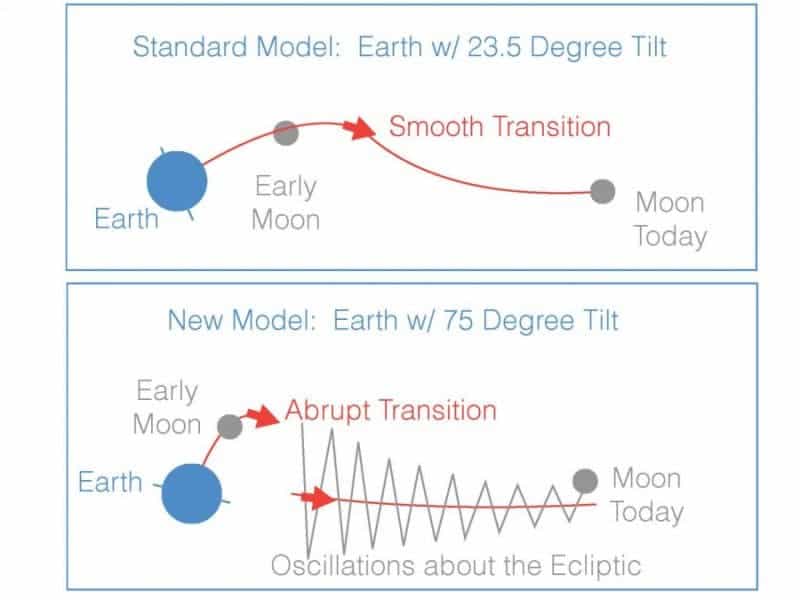 In this model, the young moon began its orbit within Earth’s equatorial plane. In the top panel, Earth’s tilt began near the current value of 23.5 degrees. In the lower panel, the Earth had a much higher tilt after the impact (~75 degrees, lower panel). This is consistent with the moon’s current 5-degree orbital tilt away from the ecliptic.
Image credits Douglas Hamilton et al., (2016).

“As the moon moved outward, Earth’s steep tilt made for a more chaotic transition as the sun became a bigger influence,” Cuk said.

“Subsequently, and over billions of years, the moon’s tilt slowly decayed down to the five degrees we see today. So today’s five degree tilt is a relic and a signature of a much steeper tilt in the past.”

The team agrees that their model doesn’t answer every question about the Moon’s orbit — but the model’s strength, Hamilton says, is that it forms a solid framework from which this questions can be answered in the future.

“There are many potential paths from the moon’s formation to the Earth-moon system we see today. We’ve identified a few of them, but there are sure to be other possibilities,” Hamilton said.

“What we have now is a model that is more probable and works more cleanly than previous attempts. We think this is a significant improvement that gets us closer to what actually happened.”

The full paper “Tidal evolution of the Moon from a high-obliquity, high-angular-momentum Earth” has been published in the journal Nature.