Molecular oxygen found on the comet 67P/Churyumov-Gerasimenko isn’t produced on the surface — it comes from the early days of the Solar System. 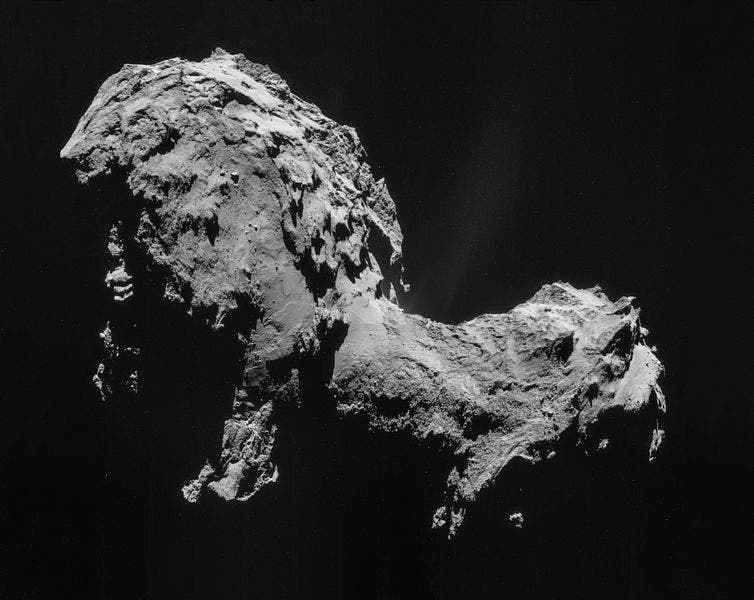 Between August 2014 and September 2016, the European Space (ESA) Agency’s Rosetta craft tagged along with the comet  67P/Churyumov-Gerasimenko as it was trekking around the Sun. The mission also saw a probe delivered to the comet’s surface.

Among other things, the ESA wanted to use Rosetta to study the comet’s coma — the nebulous envelope around the nucleus of a comet. This structure is created by ice subliming — turning from a solid directly into a gas — on the comet’s surface under the sun’s rays. Rosetta’s analysis of the coma revealed that it contains water, carbon monoxide and dioxide (all compounds we were expecting to find), but also molecular oxygen.

Molecular oxygen is composed of two oxygen atoms tied together by a covalent bond. Here on Earth, it’s produced by plants via photosynthesis, but researchers are well aware that oxygen is abundant in many places of the universe — we’ve detected molecular oxygen around some of Jupiter’s moons, for example. By mass, oxygen is the third-most abundant element in the universe, after hydrogen and helium — but finding it around a comet was surprising, to say the least.

With the finding also came questions regarding the origin of this molecular oxygen. Some researchers suggested that it might be produced on the comet’s surface under the action of charged ions in the solar wind.

A new paper published by members of the Rosetta team has analyzed data beamed back by the craft to get to the bottom of the issue. The research, led by researchers from the Imperial College London, found that the proposed ionic mechanism for molecular oxygen generation couldn’t account for levels of this molecule observed in the coma. This would mean that the oxygen molecules Rosetta stumbled upon are primordial — meaning they were already fully formed as the comet itself quickened during the early days of the Solar System 4.6 billion years ago.

The findings don’t rule out oxygen generation at the surface level of 67P — but that the majority of the oxygen in the comet’s coma is simply not produced through such a process.

While there are other theories regarding the origin of 67P’s oxygen, the team didn’t address them in any way, either to confirm or infirm them. So far, however, they say that the primordial oxygen theory is the one which fits available data best. This is further supported by other theoretical work that treats the formation of molecular oxygen in dark clouds and the presence of molecular oxygen in the early Solar System, they add. In the team’s model, preexisting molecular oxygen froze into tiny grains that later clumped together, attracted more material, and eventually got bound up in the comet’s nucleus.

The paper “On the origin of molecular oxygen in cometary comae” has been published in the journal Nature Communications.