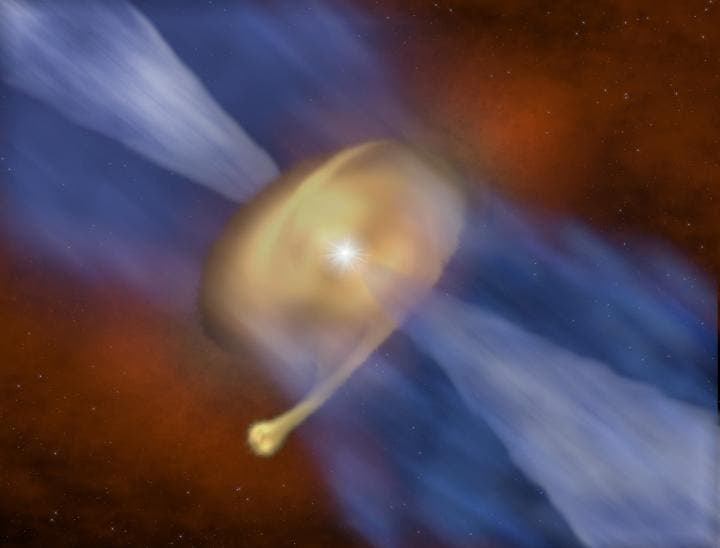 Artist impression of the disc of dust and gas surrounding the massive protostar MM 1a, with its companion MM 1b forming in the outer regions. Credit: J. D. Ilee / University of Leeds.

When astronomers cast their telescope towards an infant star, they were surprised to find that it was nursing a smaller stellar companion within its massive stellar disk. The amazing discovery marks the first time scientists have observed a star forming out of the fragmented disk of another.

Some solar systems have two stars — they generally have a common center of gravity around which planets, asteroids, and other celestial bodies orbit. Such binary systems are quite common in the universe and astronomers believe that they usually form from the same molecular cloud.

Once a star or binary system settles, it starts forming planets out of the dense disk of gas and dust that surrounds them. Imagine the surprise of astronomers from the University of Leeds when they zoomed in on a young star called MM 1a and found a much smaller star, MM1b, lurking in the outer accretion disk where planets should normally form.

“Stars form within large clouds of gas and dust in interstellar space,” said Dr. Ilee, from the School of Physics and Astronomy at Leeds, said in a statement.

“When these clouds collapse under gravity, they begin to rotate faster, forming a disc around them. In low mass stars like our Sun, it is in these discs that planets can form.”

“In this case, the star and disc we have observed is so massive that, rather than witnessing a planet forming in the disc, we are seeing another star being born.”

The astronomers used turned to the Atacama Large Millimetre/submillimetre Array (ALMA), nested atop the Chilean desert, to spot the unusual stellar pairing. This unique instrument exploits a phenomenon called interferometry which enables 66 individual dishes to mimic the power of a single telescope with a theoretical diameter of 4 kilometers. 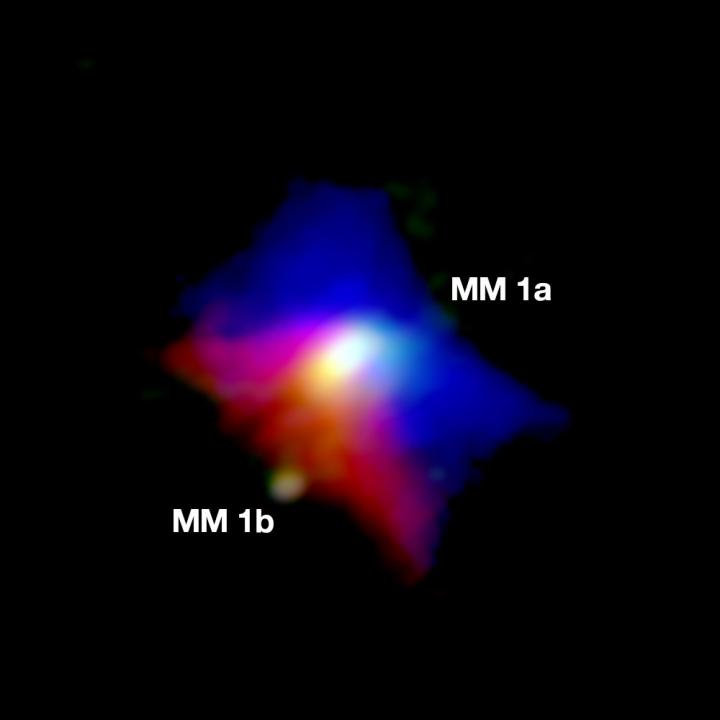 The researchers were able to calculate the mass of both stars by measuring the amount of radiation emitted by the fragmented disk, as well as the very subtle shifts in the frequency of light emitted by disk’s gas. They found that MM 1a is 40 times more massive than the Sun while its companion star, MM 1b, weighs less than half the mass of the Sun.

Binary stars are often very similar in mass, meaning they likely formed as siblings. In this particular case, the mass ratio of the two stars is 80 to 1, clearly suggesting an entirely different process of formation for the two cosmic objects.

The British researchers came to the conclusion that the most favorable formation process for MM1b is in the outer regions of the massive accretion disk. In this outmost region, the disk can be gravitationally unstable, thereby collapsing under its own weight, forming a new star.

What’s more, the researchers believe that the small, young star could be surrounded by an accretion disk, which could lead to the formation of planets of its own. That’s a hypothesis that will need to be verified by subsequent observations. But even if such planets are in the process of forming or already exist, they’ll be shortlived.

“Stars as massive as MM 1a only live for around a million years before exploding as powerful supernovae, so while MM 1b may have the potential to form its own planetary system in the future, it won’t be around for long,” Dr. Ilee said.

The rare binary system was described in the Astrophysical Journal Letters.