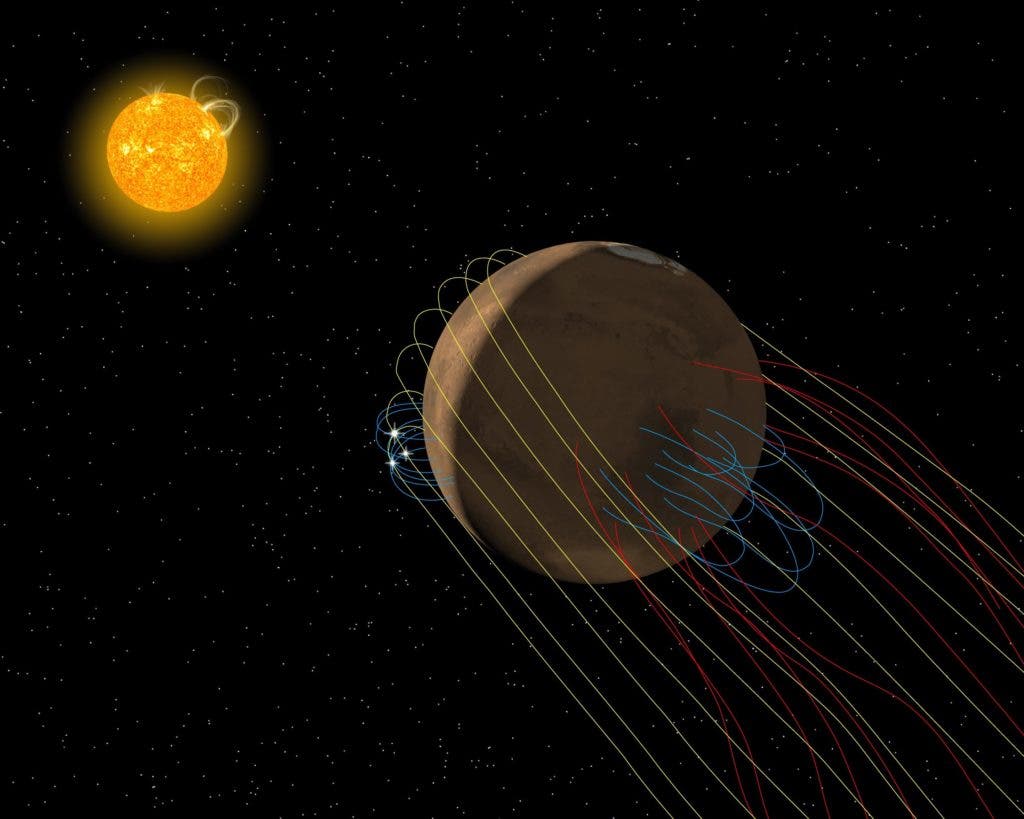 Mars has a unique magnetotail found nowhere else in the solar system, NASA scientists report. According to the data gathered by the Mars Atmosphere and Volatile Evolution Mission (MAVEN) spacecraft, currently orbiting the Red Planet, this intriguing invisible magnetic tail is twisted by the interaction with solar wind. Studying this rare phenomenon could fill in the blanks in our understanding of how Mars went from a flourishing, wet world to a barren wasteland.

Tail in the solar wind

Here on Earth, the motion of molten iron alloys in its outer core acts like a geodynamo which generates a massive magnetic field. Scientists call our planet’s magnetic field the magnetosphere. It extends for several tens of thousands of kilometers into space, well above the atmosphere, sheltering the planet from charged particles of the solar wind and cosmic rays that would otherwise strip away the upper atmosphere, including the ozone layer that protects the Earth from harmful ultraviolet radiation.

Earth isn’t unique in this respect. Jupiter has masses of liquid metallic hydrogen in its outer mantle, creating the largest planetary magnetic field in the solar system. Uranus generates a global magnetosphere closer to the surface, which leads to some very strange quadrupole field effects —  rather than just a north and a south, there are another two poles lurking in a quadrupole field. Mars also used to have a magnetic field but lost it half a billion years after its formation.

Scientists aren’t sure how the red planet lost its magnetosphere but there are currently two leading theories. The first says that its core shut down, deactivating the dynamo and consequently Mars’ global magnetic field. The other leading hypothesis suggests that massive heat generated by large asteroid impacts warmed the outer layer of the planet to such a degree that it shut down convection from the hot core to the mantle.

After Mars’ lost its magnetic field, the atmosphere soon followed. With nothing to shelter it from cosmic rays and solar storms, the atmosphere thinned to the point that it’s now roughly 100 times less dense than Earth’s atmosphere. Mars is still continuously losing its atmosphere.

Nowadays, solar wind mostly comprised of protons strikes Mars at about 1,000,000 mph, moving so quickly that it flings atmospheric particles. Presently, Mars loses about 100 grams of atmospheric gas every second.

“We found that Mars’ magnetic tail, or magnetotail, is unique in the solar system,” said Gina DiBraccio of NASA’s Goddard Space Flight Center in Greenbelt, Maryland, in a public statement. “It’s not like the magnetotail found at Venus, a planet with no magnetic field of its own, nor is it like Earth’s, which is surrounded by its own internally generated magnetic field. Instead, it is a hybrid between the two.”

Since MAVEN continually changes its orbit orientation with respect to the Sun, the spacecraft took measurements covering a wide range of Martian surface features. NASA scientists then used this valuable data to plot a map of the Martian magnetotail and its interaction with the solar wind. The scientists then designed a model that predicts the magnetic reconnection and compared their results with the live data. The theoretical and experimental data were in agreement suggesting the Martian magnetotail twists “45 degrees from what’s expected based on the direction of the magnetic field carried by the solar wind,” said DiBraccio.

Next, NASA plans to use other instruments deployed by MAVEN, this time to generate an ‘escaping particles’ map. The goal is to see whether or not reconnection is contributing to Martian atmospheric loss and how significant this effect is.

“Mars is really complicated but really interesting at the same time,” said DiBraccio.