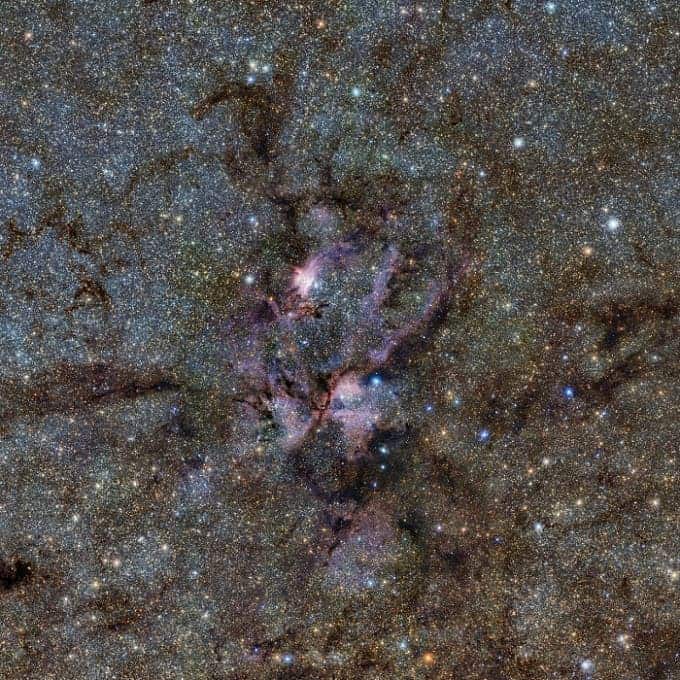 An infrared image of the Lobster nebula, filled with glowing clouds of gas and tendrils of dust surrounding hot young stars. (c) ESO

Deep inside the Milky Way lies the beautiful star breeding ground known as the Lobster nebula, located in the constellation Scorpius – some 8,000 light-years away from Earth. The nebula has been the subject of study for astronomers for many years, however just recently it has been imaged in infrared for the first time capturing its beauty in a whole new light.

The ESO’s Visible and Infrared Survey Telescope for Astronomy (VISTA)  at the Paranal Observatory in Chile is  the largest and most powerful survey telescope ever built. It’s task is that of scanning the Milky Way as part of a major effort to map our galaxy’s structure and learn how it formed.

Part of this survey, the Lobster nebula, known to astronomers by the name of NGC 6357, was also scanned. Being a nebula, naturally a lot of it is obscured to optical observations due to the massive clouds of dust that surround it on all planes. This new infrared observation has now revealed a myriad of new elements hidden before, like  tendrils of purple gas that stretch out from the nebula in different areas.

Besides being a pretty picture, the Lobster nebula actually presents some unique characteristics. For one, the nebula is home to the Pismis-24 star cluster, which contains some of the most massive stars in the Milky Way. Nevertheless, the Lobster nebula joins countless other nebulae, clusters, and various cosmic bodies as part of the massive VISTA survey which intends to eventually build a huge dataset capable that might hint to the origin, early life, and structure of the Milky Way.

As an added bonus, ESO has also provided a stunning video that zooms in on the Scorpius constellation and beautifully lands the viewer gently at the heart of the nebula.