NASA reports that  briny water is flowing out of Martian mountain slopes, at the surface. Let that sink in for a moment.  Now, time to pull yourself together and check out some more details. 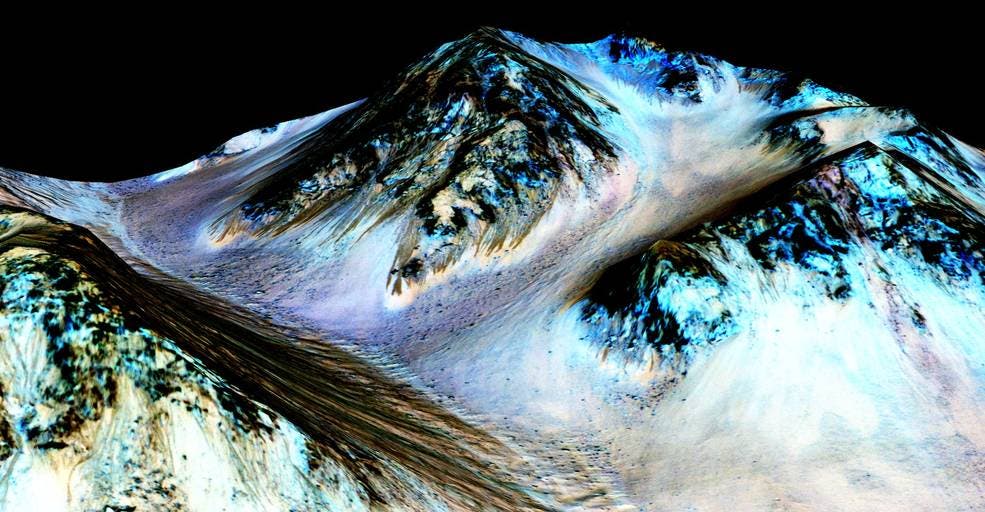 These dark, narrow, 100 meter-long streaks called recurring slope lineae flowing downhill on Mars are inferred to have been formed by contemporary flowing water. The image is produced by draping an orthorectified (Infrared-Red-Blue/Green(IRB)) false color image on a Digital Terrain Model (DTM) of the same site produced by High Resolution Imaging Science Experiment. Credits: NASA/JPL/University of Arizona

The discovery was made by a team of researchers led by Lujendra Ojha of the Georgia Institute of Technology which inferred the findings based on images taken by the NASA’s Mars Reconnaissance Orbiter (MRO). Surveys showed that seasonal dark streaks appear like spots on the planet’s surface, on the slopes of mountain ridges. When Ojha and his colleagues first noticed the streaks, they hypothesized that these could be marks left over by flowing water. Now, armed with spectral analysis that revealed that chemical makeup of the dark streaks, the researchers could say for certain: these are hydrated salts. In other words, water mixed with salt brine. 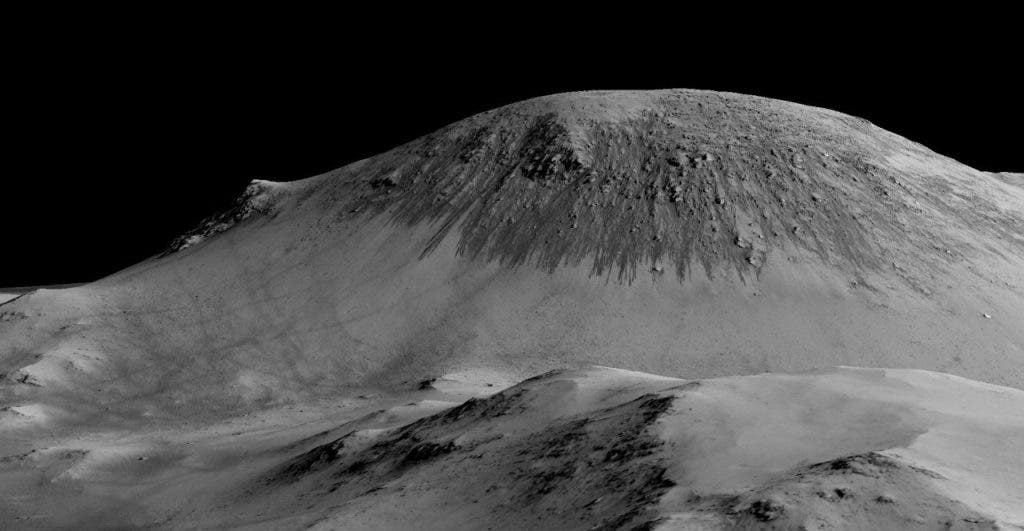 The salt is actually essential, since it keeps the water liquid at lower temperatures. It’s why cities often spray roads with salt: to melt it.  Pure water would freeze immediately on Mars, where average temperatures are about -55° C ( -67° F). In fact, there’s always water on the surface of Mars – it’s just that it’s frozen stiff at the poles. There’s even water in the atmosphere. We know for sure that Mars used to hold vasts amounts of water, oceans miles deep with water. But then its climate changed, and it disappeared most of it vanishing out into space. But not quite all, it seems.

“Our quest on Mars has been to ‘follow the water,’ in our search for life in the universe, and now we have convincing science that validates what we’ve long suspected,” said John Grunsfeld, astronaut and associate administrator of NASA’s Science Mission Directorate in Washington. “This is a significant development, as it appears to confirm that water — albeit briny — is flowing today on the surface of Mars.”

The dark streaks observed by Ojha and team are called recurring slope lineae (RSL). These hydrated salts, however, don’t stay liquid for long, but keep flowing only in certain times of the day and when the season allows, i.e. when surface temperature isn’t that low. 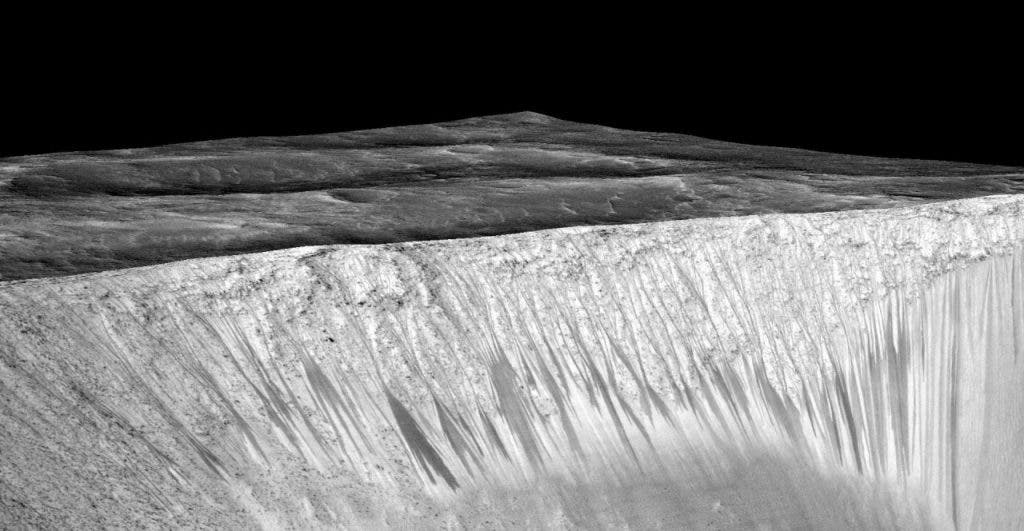 Recurring slope linae on the Garni crater on Mars.

“We found the hydrated salts only when the seasonal features were widest, which suggests that either the dark streaks themselves or a process that forms them is the source of the hydration. In either case, the detection of hydrated salts on these slopes means that water plays a vital role in the formation of these streaks,” said Ojha.

Where does the water come from? That’s the million dollar question. We don’t know yet for sure. It could come from a number of sources: it could be melting subsurface ice; water absorbed from the atmosphere; or even from an aquifer. The latter would be truly amazing, and not that preposterous seeing how Curiosity found water under the surface of the red planet.

Given these findings, the changes of finding life on Mars have gone up a notch. Perchlorate salts, the kind found by NASA, are widespread here on Earth. For instance, the chemical makeup of the reported RSL is very similar to that found in the Atacama Desert in Chile. Here very salty, briny water can be found and inside it all sorts of microorganisms lurk. Mars’ mountains are a whole different beast, however. Besides the climate – totally inhospitable – researchers found high concentration of magnesium perchlorate, magnesium chlorate, and sodium perchlorate. These typically oxidize fast and break down organic material, the stuff life is made of.   But while the analogy might not be perfect, it does hint that it might be possible to find life inside these dark streaks.

We might even find out soon. The Curiosity rover is at the moment at Mount Sharp, which incidentally also features some RSL. The terrain is so messed up, though, that sending Curiosity to drill or sample the area is a suicide mission. We need to send new probes, the kind that are well equipped and designed to make the jump. Considering NASA wants to send a new rover to Mars on 2020, we might not have to wait long to see. But even if there isn’t any life on Mars, the prospect of another planet – which isn’t that far away (1 and half years to be more precise) – that hosts water both on its surface and below is hugely tempting for astronauts or would be human settlers. The pieces are finally coming together. What’s certain is that we’re living exciting times and the coming decades will be transformational for the human species. Wait and see. Better yet, pitch in.

Findings were published in  Nature Geoscience.

One thought on “Yes, there’s liquid water flowing on the surface of Mars!”