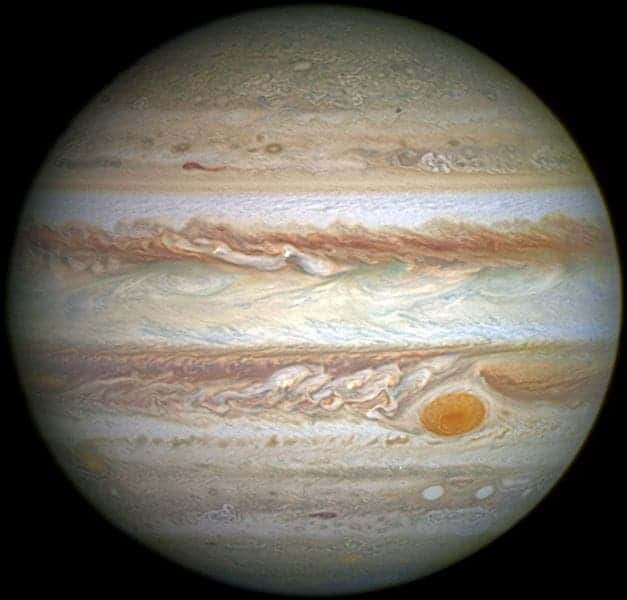 A new factor has been added to the debate on whether or not living organisms could exist on Jupiter. You probably know Jupiter is a Jovian planet, a giant formed primarily out of gases. So how could alien life be able to exist in an environment where most of the phases of matter are absent? The answer is simply found in the element of water.

Within the rotating, turbulent Great Red Spot, perhaps Jupiter’s most distinguishable characteristic, are water clouds. Many of the other clouds in this enormous perpetual storm are comprised of ammonia and/or sulfur. Life theoretically cannot be sustained in water vapor alone; it thrives in liquid water. But according to some researchers, the fact alone that water exists in any form on the planet is a good first step.

The Great Red Spot is still a planetary feature which stumps much of the scientific community today. As it has been observed for the past century and a half, the Great Red Spot has been noticeably shrinking. The discovery of water clouds may lead to a deeper understanding of the planet’s past, including whether or not it might have sustained life, as well as weather-related information.

Some scientists have pondered the possibility that, due to the hydrogen and helium content in its atmosphere, Jupiter could be a diamond-producing “factory.” They have further speculated that these diamonds could enter into a liquid state and a rainfall of liquid diamonds would be in the Jovian’s weather forecast.

Likewise, the presence of water clouds means that water rain (a liquid) is not entirely impossible. Máté Ádámkovics, an astrophysicist at Clemson University in South Carolina, had this to say on the matter:

“…where there’s the potential for liquid water, the possibility of life cannot be completely ruled out. So, though it appears very unlikely, life on Jupiter is not beyond the range of our imaginations.”

Scientists are acting accordingly, researching the part which water plays in the atmosphere and other natural systems on Jupiter. They remain skeptical but eager to follow up on the new discovery. They shall also strive to find out just how much water the planet really holds.