After days of gripping suspense, the two small rovers finally landed on the Ryugu asteroid — and they’ve even sent a few postcards back home. 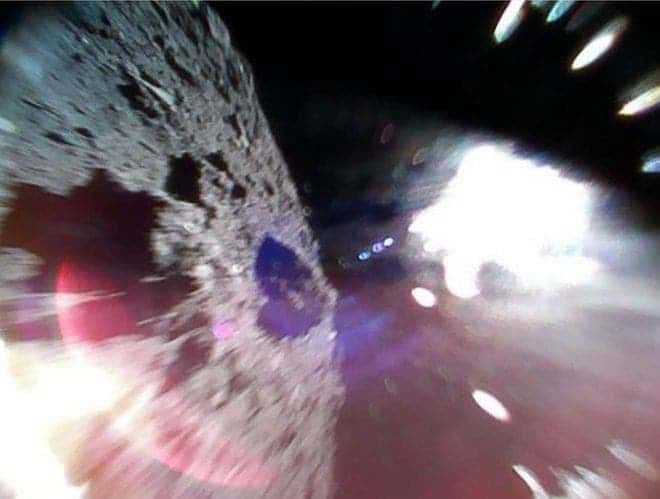 This photo shows the view from asteroid Ryugu from the Minerva-II1A. The probe is one of two that landed on Ryugu from the Japanese Aerospace Exploration Agency’s Hayabusa2 spacecraft. It’s the first time two mobile rovers landed on an asteroid. The image is blurred because it was taken during the rover’s descent. Credit: Japan Aerospace Exploration Agency.

The rovers are part of Japan Aerospace Exploration Agency’s Hayabusa2 asteroid sample-return mission. They were deployed from the spacecraft and successfully landed on Ryugu, and both are still in good condition.

In order to perform the deployment, the Hayabusa2 carefully lowered itself carefully down toward the surface, until it was only 55 meters (180 ft) above. Then, after the rovers were deployed, the shuttle went back up to 20 km (12.5 mi) above the asteroid.

We are sorry we have kept you waiting! MINERVA-II1 consists of two rovers, 1a & 1b. Both rovers are confirmed to have landed on the surface of Ryugu. They are in good condition and have transmitted photos & data. We also confirmed they are moving on the surface. #asteroidlanding

Because Ryugu is so small and doesn’t have a significant gravitational field, the landing was particularly difficult, but this also allows the rovers to hop around the asteroid, taking photos as they go.

The 1kg rovers are equipped with wide-angle and stereo cameras, and are powered internal rotors, which propel the robots across the asteroid. The rovers also feature sensors that measure the surface temperatures, and Hayabusa2 itself carries sensors for remote sensing and sampling.

[panel style=”panel-default” title=”Underwater palace.” footer=””]Ryugu is an asteroid which measures approximately 1 kilometer (0.6 mi) in diameter. Ryugu was discovered in 1999, and its name refers to Ryūgū (Dragon Palace), a magical underwater palace in a Japanese folktale. In the story, a fisherman Urashima Tarō travels to the palace on the back of a turtle, and when he returns, he carries with him a mysterious box — something which is alluding to Hayabusa2 returning with samples[/panel]

But while this is already a remarkable achievement, the mission is still far from being over: the Japanese space agency still has two more deployments to complete — a larger rover called MASCOT in October and another tiny hopper next year. Then, the rovers have to collect samples, and board the shuttle again, returning to Earth for lab analysis. If everything goes according to plan, the shuttle will leave Ryugu in 2019 and will return back to Earth in 2020.

So far, the asteroid’s surface was rougher than expected, which brought another layer of difficulty to the mission. The surface is blackish-colored, and the asteroid has maintained its original composition for eons, as Ryugu is a particularly primitive asteroid type. Studying it could shed light on the origin and evolution of Earth and even the solar system. For now, we eagerly await the next mission checkpoints.