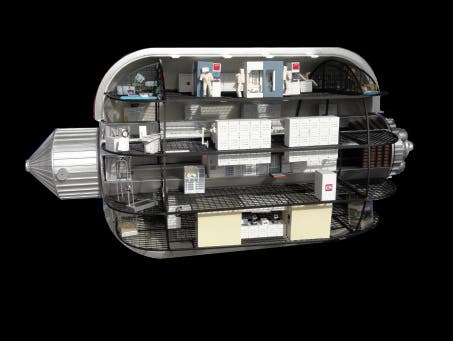 Recently, NASA announced in a press release that it has awarded $17.8 million to Bigelow Aerospace, a private aerospace contractor, to install a new habitat module to the International Space Station. The module is atypical of the current “tin can” modules, as it’s essentially an inflatable living quarters. Details are still scarce, however, according to Bigelow the add-ons are set to triple the size of the ISS in the future and provide a much higher degree of comfort and space to the astronauts stationed there.

Funded in 1999 by Robert Bigelow, who made his fortunate primarily from real estate, the company speculated the canceling of NASA’s TransHab program, in which inflatable modules for the ISS were designed, and bought off the patents. Since then the company has made big leaps and has grown ambitious. Bigelow intends on deploying multiple space stations across Earth low-orbit designed for several applications, mostly tourism, catering to all kinds of clients, be them countries, wealthy individuals or businesses.

“We offer a way for countries to bolster their human spaceflight programs while at the same time reducing their budgets, or for smaller countries that thought human spaceflight was beyond their financial reach to enjoy capabilities that until now only the wealthiest nations have been able to sponsor,” Bigelow Aerospace’s website states.

In 2006, the company put two of its modules Genesis 1 and Genesis 2 to orbit in 2006 and 2007, respectively. Both measured 406 cubic feet (11.5 cubic m) of pressurized volume.  The “Bigelow Expandable Activity Module” or BEAM module that will be attached to the International Space Station in two years or so would be 2100 cubic meters in size, much larger than the ISS’s current 837 cubic meters. These modules offer a greater protection against radiation and are also a lot cheaper, which makes them ideal of living quarters and possibly a great business venture. They’re also relatively easy to deploy, delivered in compact form and inflated upon installation.

Not a lot of information has been made public, however Bigelow has a scheduled launch with SpaceX in 2015, which hints to an eventual deployment to the International Space Station. Also, the company has signed memoranda of understanding with seven governments that wish to use the company’s orbiting facilities — Australia, Singapore, the United Kingdom, the Netherlands, Japan, Sweden and Dubai, in the United Arab Emirates. When the company’s stations will be up and running, as several are planed, governments and individuals will be able to rent them, perhaps starting with $28.75 million for an all-inclusive 30-day stay for one astronaut.

NASA and Bigelow Aerospace are set to hold a joint press conference at Bigelow’s headquarters in North Las Vegas, NV on January 16 to further discuss details of the joint venture.