A mysterious cosmic object thought to be an immense cloud of gas and dust left scientists scratching their heads after it wasn’t consumed by the supermassive black hole that lies at the center of our galaxy. After it passed a critical point in its orbit around the black hole – where a gas cloud would have typically become engulfed in a fireworks show – followup analysis suggests that the object, dubbed G2, is actually binary system (a solar system with two stars) which has merged into a bright, mega star following the close encounter.

More than the black hole could chew 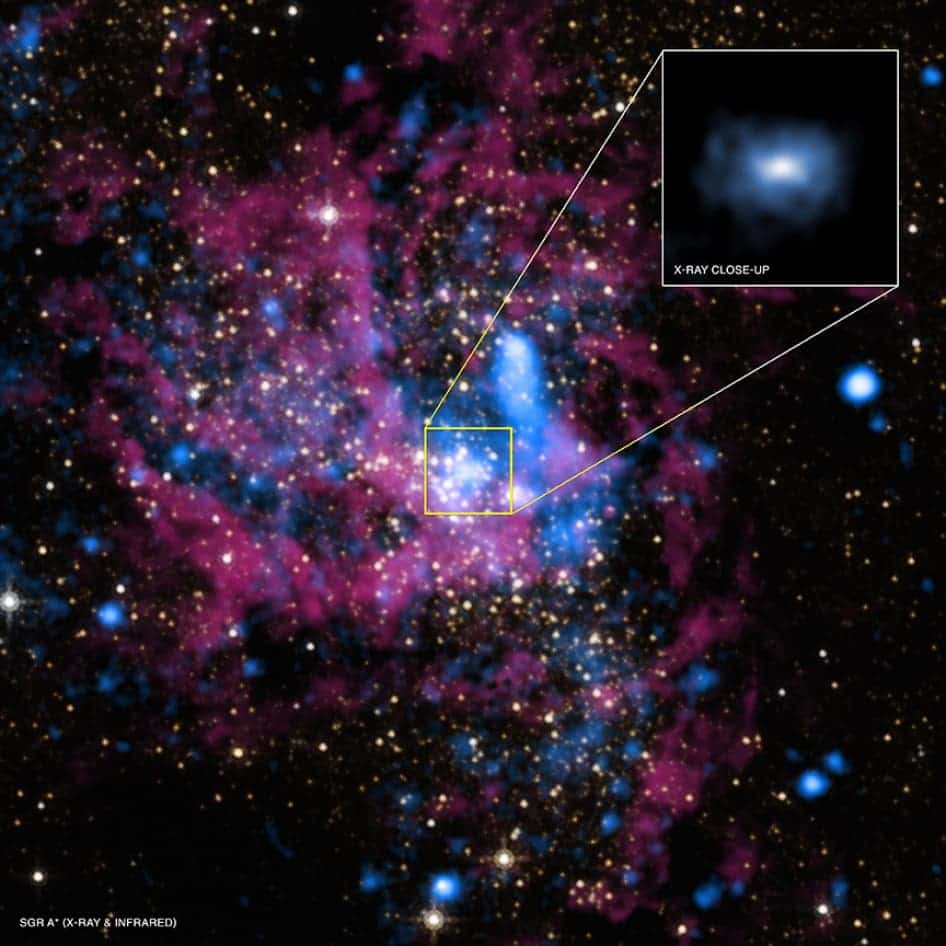 The center of the Milky Way galaxy, with the supermassive black hole Sagittarius A* (Sgr A*), located in the middle, is revealed in these images. The large image contains X-rays from Chandra in blue and infrared emission from the Hubble Space Telescope in red and yellow. Credit: NASA

The object was first identified in 2011, and astronomers had been excited ever since in anticipation of the moment it would become consumed by Sagittarius A*, the supermassive black hole at the Milky Way’s center. This should have happened by July of this year, but strangely enough the event didn’t unfold as predicted. If G2 was indeed a gas cloud, then the dynamics surrounding the black hole’s event horizon would have pulled in clumps of gas and dust, generating powerful flares. Instead, astronomers studying the object using the European Southern Observatory’s Very Large Telescope in Chile found that these effects were a lot milder and subtle. 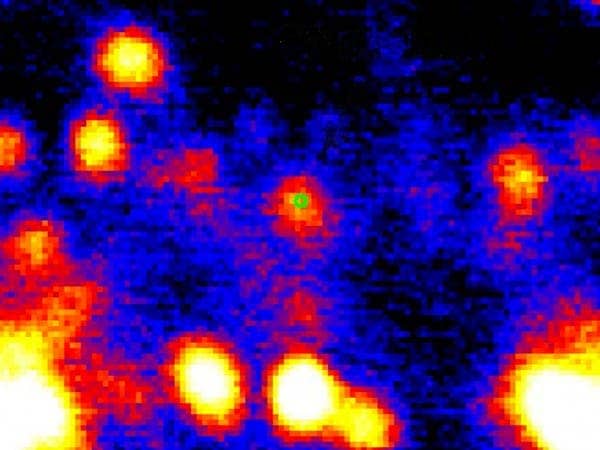 The G2 object, captioned in the middle of the image snapped by the Keck telescopes shortly after its close encounter with a supermassive black hole. Credit: ANDREA GHEZ, GUNTHER WITZEL/UCLA GALACTIC CENTER GROUP/W. M. KECK OBSERVATORY

A team led by Andrea Ghez of the University of California, Los Angeles, followed-up using the twin 10-meter Keck telescopes in Hawaii to observe G2 between March and August which peered through the avalanche of gas and dust at 3 micrometer infrared wavelengths. The researchers found the object survived the close encounter and was back to its usual orbit.

“G2 survived and continued happily on its orbit; a simple gas cloud would not have done that,” said Ghez. “G2 was basically unaffected by the black hole. There were no fireworks.”

Instead, what Ghez and colleagues discovered was that the mysterious object is in fact a star surrounded by a gas and dust envelope, hence the confusion the researchers argue. This is not an ordinary star, and its close encounter with Sagittarius certainly didn’t leave G2 unscathed. Apparently, G2 was initially a binary system – two stars tugged together by gravity. Binary systems are very common throughout the galaxy, and systems comprised of three or more stars are also possible.

The star is twice the mass of our sun but 100 times its size, the team reports this week in The Astrophysical Journal Letters. It makes sense since the binary stars merged together following a spirally trajectory influenced by the black hole’s gravity.  The result is a new star so hot that it swells up like a freshly ignited young protostar. If this hypothesis is true, then astronomers might now be able to understand and unravel other mysteries surrounding  Sagittarius A* like why there’s an unusual amount of young stars in the black hole’s neighborhood, but almost no old stars.

“This may be happening more than we thought. The stars at the center of the galaxy are massive and mostly binaries,” said Ghez. “It’s possible that many of the stars we’ve been watching and not understanding may be the end product of mergers that are calm now.”

“We are seeing phenomena about black holes that you can’t watch anywhere else in the universe,” added Ghez. “We are starting to understand the physics of black holes in a way that has never been possible before.”