In order to study our planet’s climate and atmosphere in greater detail than ever before, the European Space Agency (ESA) flies a fleet of satellites called Sentinels that constantly monitor Earth. Now, ESA has announced that data collected by one of its most recently launched satellites are available for the public, which will help improve air quality forecasts but also impact environmental policy.

The Sentinels are designed to address six main themes with their observations: atmosphere, climate change, marine environment, emergency management and land and security. These observations are beamed back to Earth, where they are analyzed and processed into usable data by the Copernicus Atmosphere Monitoring Service (CAMS).

In October 2017, ESA launched Sentinel-5P –– the most recent satellite in Copernicus’ fleet and the precursor to Sentinel-5. It’s the first Copernicus mission solely dedicated to monitoring the atmosphere, being meant to fill the data gap between the retirement of the Envisat satellite and NASA’s Aura mission.

Specifically, the Sentinel-5P mission is preoccupied with air quality. When this information is combined with ground — and other satellite-based observations, scientists become better equipped to assess the state of the atmosphere — not only today but also in the future. 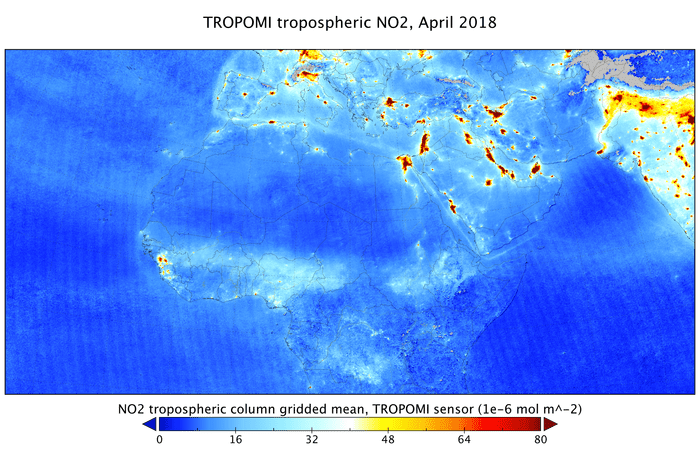 “We often hear about climate change and the depletion of the ozone layer when we consider why we need to monitor the atmosphere,” says Sentinel-5P mission manager, Claus Zehner. “But air quality is also a huge global problem. It affects the health of humans and influences agriculture and the economy in general.”

The best part is that all of this information is open and free to use by the public — by everyone. It can be used, for instance, to devise more accurate air quality forecasts, similarly to how most people check weather forecasts today.

Previously, Sentinel-5P readings were verified in a preliminary phase where early data was compared with the CAMS forecasting system. This procedure allowed the detection and solving of “teething” issues, so the instruments could be calibrated.

“Anybody can access the Sentinel-5P data, but it is complex and has to be processed before it is useful for addressing specific questions,” explains Richard Engelen, Deputy Head of CAMS. “CAMS does this processing so that the data user doesn’t have to, by combining Sentinel-5P data with observations from other satellite instruments to provide combined datasets as well as forecasts for the next few days.”

Central to Sentinel-5P’s ability to map trace gases in the atmosphere, such as nitrogen dioxide, ozone, and aerosols, is a spectrometer called TROPOMI (Tropospheric Monitoring Instrument) — the most advanced multispectral imaging spectrometer to date. Thanks to its high spatial resolution of up to 7 x 3.5 km, it can even detect air pollution over individual cities.

“In combination with the improved sensitivity of the detectors we now have a spectrometer that is about 10 times better than its predecessor,” said Harry Förster from the Netherlands Space Office in a statement.

The first ozone retrievals of Copernicus Sentinel-5P show the closing of the ozone hole over the South Pole during November 2017. Credit: ESA.

This kind of real-time monitoring of emissions and key pollutants will help inform environmental agencies and guide policy-makers, directly benefiting citizens — particularly those suffering from some form of respiratory disease. For instance, having a more accurate air quality forecast over the coming week might help individuals take precautions.

“We have been using preliminary Sentinel-5P data in the CAMS global system. Early impressions are excellent and we expect that Sentinel-5P will soon become one of the most important data sources underpinning the quality of CAMS information products,” Engelen said in a statement to the press.

Sentinel-5P data — but also Sentinel-1,-2, and -3 — are available on the Copernicus website. In the future, the geostationary Sentinel-4 and polar-orbiting Sentinel-5 will monitor the composition of the atmosphere.