Astronomers have found a cosmic friend for Pluto. 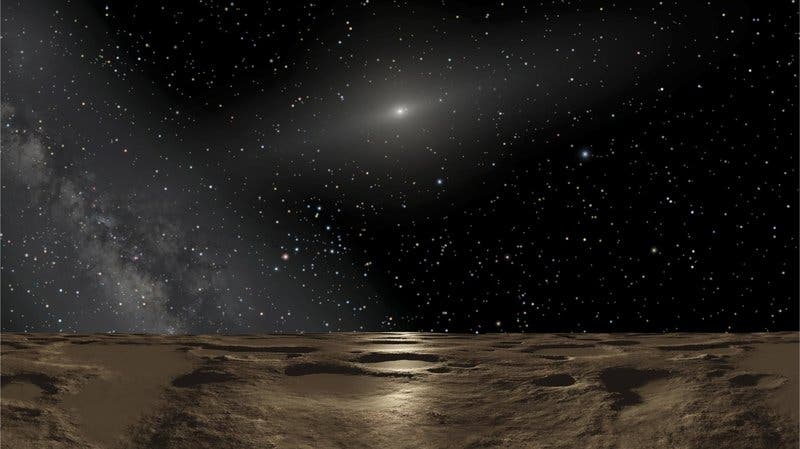 An artist’s conception of the view from the dwarf planet Sedna. David Gerdes of the University of Michigan says the surface of 2014 UZ224 would look much the same.
NASA, ESA and Adolf Schaller

It’s bizarre to discover something new in our solar system. You’d think by now we’d know everything that lurks around, but we’re constantly reminded that this isn’t the case. This time, it’s another dwarf planet, similar in a way to Pluto – but what’s even more bizarre is how it was discovered.

The discovery started a few years ago when University of Michigan astronomer David Gerdes had some undergrads visiting him for the summer. As a summer project, he tasked them with finding bodies in our solar system by studying their projection on the galaxy. How is this done?

“Objects in the solar system, when you observe them at one instant and then a little while later, they appear to be in a different place in the sky,” Gerdes says.

Stars and galaxies far away are basically stationary – we don’t see them moving relative to our position. But something that’s nearby, in our solar system, you’ll see it pop up and down in different locations. Connect the dots and you’ll have the object’s orbit around the sun. Then you can understand its position. But Gerdes’ undergrads likely had other plans as well, because they didn’t take notations every night.

So it took them a lot, but ultimately they pinpointed the location and size.

The dwarf planet called 2014 UZ224 measures about 330 miles (530 kilometers) across. It lies 8.5 billion miles (13.7 billion km) from the sun, NPR reported today. For comparison, Pluto’s largest moon, Charon, is about 750 miles (1,200 km) in diameter, and reaches a maximum distance of about 4.5 billion miles (7.3 billion km) away from the sun. So the new dwarf planet is much smaller, much farther away and much smaller than even Pluto’s moon.

Dwarf planets are a valued prize, but they’re not the ultimate prize. That would be the fabled “9th planet” – a theorized planet 10 times larger than the Earth, lurking on the outside of the solar system. Still, Gerdes says there’s a good chance his dwarf planet maps also contain an image of the planet – if it exists.