The distance between the Earth and the moon is 384,400 km (240,000 miles) — we’re taught that in high school, and even if we don’t know it, it’s always easy to look up on the internet. But knowing and comprehending that distance are two entirely different things. Now, you can truly see it, thanks to this image from NASA’s OSIRIS-REx spacecraft. 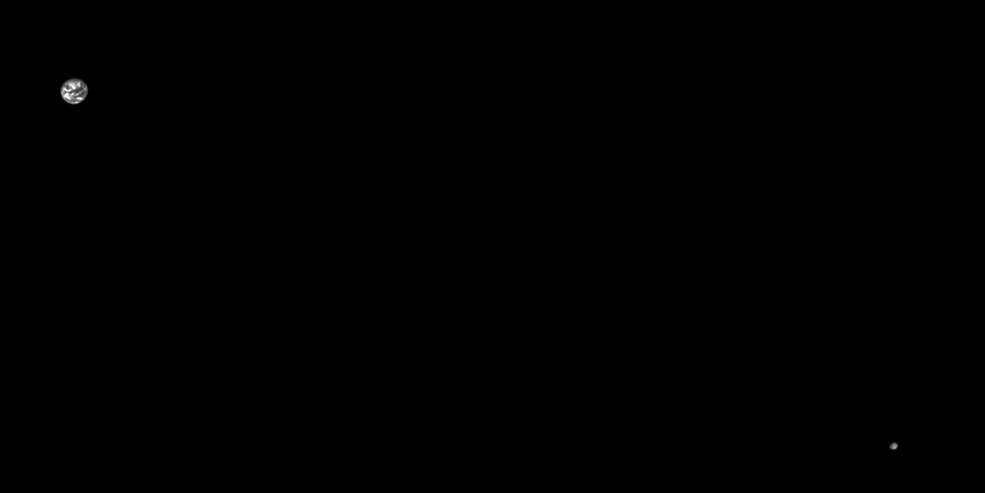 OSIRIS-REx is a NASA asteroid study-and-sample-return mission. Its goal is to reach and sample an asteroid called 101955 Bennu, and return a sample to Earth by 2023 for detailed analysis. But once again, NASA spoils us with something extra. This time, it’s a composite image of the Earth and the Moon.

Made from data captured by OSIRIS-REx’s MapCam instrument on October 2, 2017, the image was taken at about 3 million miles (5 million kilometers) from Earth, roughly 13 times the distance between the Earth and its Moon. Three images shot at different wavelengths were combined and color-corrected to create the result we see above. The moon was brightened to make it more clearly visible.

However, the image is somewhat deceptive. Although OSIRIS’ angle offers a great view of the two celestial bodies, it isn’t perfect. Specifically, the location of the shuttle was not perpendicular on the Earth-Moon axis, which means that the perspective is a bit skewed. In this case, the obtuse angle is about 142°, which is quite different from the 90° angle which would have created a perfect image.

The angle between the three objects is 142° — 90° would be required for non-distorted perspective.

A good rule of thumb is that you could fit about 30 Earths in the space between our planet and the Moon. But if you’d copy and paste the Earth in NASA’s image, you’d see that you can only fit about 20 Earths in there, meaning you see about two-thirds of the real distance here. Nevertheless, it remains an impressive feat, a vivid visualization of an ungodly distance.

However, this isn’t the only photo of its kind. About one year ago, NASA’s Mars Reconnaissance Orbiter sent back an even broader photo which captured the Earth and Mars in the same frame. You can see the humbling image here.