Only a couple of weeks ago, a historic rendezvous between the Rosetta spacecraft and Comet 67P was made after a 10-year round-trip journey of four billion miles. Most importantly, the Rosetta deployed its lander, Philae, safely on the comet’s surface which is set to soon beam back important information pertaining to the comet’s inner composition and other details. For instance, we already know there are organic molecules on the comet, a find that has great implications for planetary formation theory as well as alien life. Now, we’re all in for a treat – a ‘true’ colour photo of the comet taken by Rosetta. 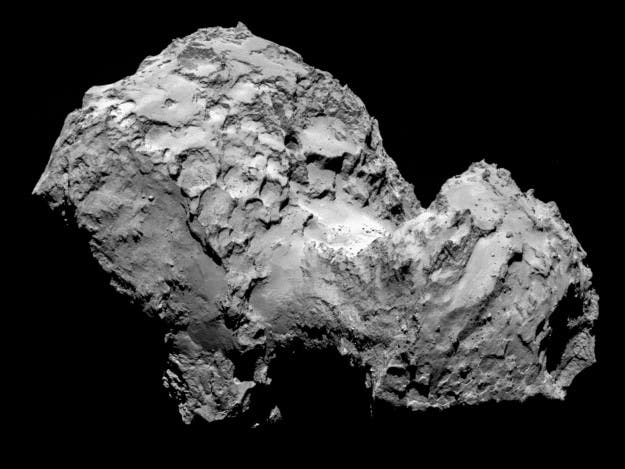 Comet 67P/Churyumov-Gerasimenko by Rosetta’s OSIRIS narrow-angle camera on 3 August 2014 from a distance of 285 km. The image resolution is 5.3 metres/pixel.
Credit: ESA/Rosetta/MPS

The press has shown so many artsy black and white photos of 67P that one might fall for it and believe that’s how the comet really looks like. Besides the Navcam, which can only capture images in grey-scale, Rosetta has another optical instrument called OSIRIS  – a dual imaging system operating in the visible, near infrared and near ultraviolet wavelength ranges. It too lacks colour sensors, but makes up for it with filter wheels which allow for the imaging of wavelengths in red, green and blue. When each frequency is combined, a true colour image can be built.

“We’ve seen crags, its weird kidney shape and all sorts of dramatic shadows playing across the comet’s surface. One thing all those images have in common is that they’re in stark, artsy black and white,” said Amanda Kooser. “This leaves us with a curious question: what does 67P look like in color?”

Imaged below is Comet 67P as it really looks like: reddish-brown. It’s important to note that the image was doctored to make up for blurs resuling from an offset between exposure times for each of the three frequencies. 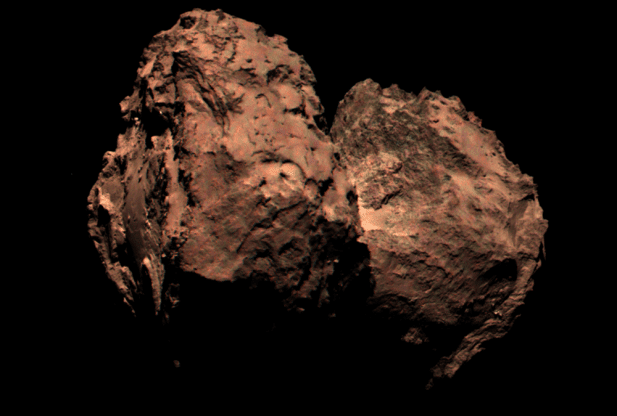 According to the report authors, “the full nucleus will be mapped at multiple resolutions” and the mapping “will include imaging using the full spectral range of… the OSIRIS imaging system (245nm to 1000nm in 11 optical filters). The color mapping will be done under good illumination condition at ~1m/pixel as part of the pyramid arc approach phase. This will later be followed by higher resolution imaging (down to 20 cm/pixels) of parts of the nucleus.”

“Rosetta’s comet will continue to be a source of fascination,” Kooser added. “Whether this image depicts what the comet would look like if you happened to be looking at it while riding on Rosetta, it definitely offers up a new perspective on our previously gray-scale viewpoint.”

A one leg short lander

In other news, the Philae lander may could become operational as early as March 2015. Currently, it landing probe is offline since it receives only one hour of sunshine a day – far too little energy to power its communications or heat the batteries, for that matter, which are now frozen in temperatures of -170 degrees Celsius. The lander bounced several times off the comet before landing, and its location is current unknown. Russian scientists believe, however, that it may have scraped a crater with one of its legs during landing, according to magnetic field data from the Rosetta Lander Magnetometer and Plasma Monitor (ROMAP).  The scrape may have sent the lander spinning away from its intended landing site.

“It was not a touchdown like the first one, because there was no signature of a vertical deceleration due to a slight dipping of our magnetometer boom as measured during the first and also the final touchdown,” ROMAP co-principal investigator Hans-Ulrich Auster said in a statement. “We think that Philae probably touched a surface with one leg only — perhaps grazing a crater rim — and after that the lander was tumbling.”