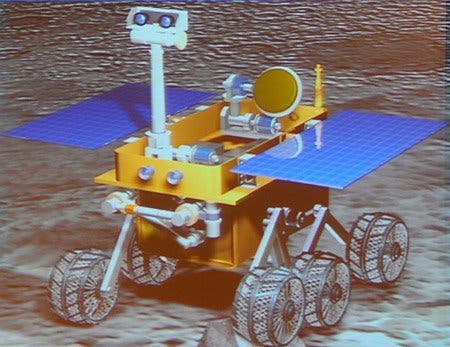 An image of the Chang'e-3 Chinese Lunar Rover presented at the IEEE's International Conference on Robotics and Automation in Shanghai. (c) IEEE Spectrum

How’s your Mandarin? If it’s as rusty as mine, we’d do best and brush up on it since it seems we’re heading towards an age of Chinese domination. Capitalizing on its tremendous financial growth, China has some incredible programs which officials hope to catapult the people’s republic in front of the new space age.

A few weeks back, I told you all about China’s plans of building its own space station by 2020 – very ambitious plans indeed, but Chinese space program officials have even more stellar goals in sight, namely plans to send a robot to the moon within two years and also to bring a lunar sample home by 2017. The plans were made public by Chinese officials att he international robotics conference in Shanghai this week.

That’s not all either, according to Ziyuan Ouyang, the chief scientist of China’s lunar exploration program, stated that after the lunar sample mission, the agency’s main goal will be to put a Chinese astronaut on the moon and also build a permanent outpost on the Earth’s natural satellite. A particular date for this goal is this very ambigous, but last month it seems a Chinese officials came out and stated that China will put a man on the moon by 2025.

Last year, in October, China launched its second moon orbiter, as part of its newly risen lunar program. The Chang’e 2, as it was dubbed, has seen a great deal of improvements compared to its predecessor, including a more powerful rocket that delivered the probe to the moon more quickly. Chang’e 3 is supposed to launch sometime in 2013 and land in Sinus Iridium, where it will deploy an autonomous rover.

The robot will be able to choose its own routes, avoid obstacles, and perform science experiments with a suite of sensors, including cameras, x-ray and infrared spectrometers, and a ground-penetrating radar. For power, the Chinese lunar rover will use solar panels, as well as a supplementary power source in the form of a plutonium-238 nuclear battery, the same type installed on the forthcoming Mars Science Laboratory rover.

Concerning the 2017 lunar sample mission, China will launch a temporary lunar drill, which will alight on the surface, take a sample and then rush back to Earth for data collection.

If you still fancy a trip to the moon, remember there’s still a chance to get on the 2015 private flight round and back. Oh, it’s only $150 million a ticket.