In March, a medium sized meteorite slammed into the moon’s surface causing the greatest explosion observed thus far, ever since the moon’s surface was first monitored by NASA looking for such events eight years ago.  The meteorite collided with the moon at a mind-boggling 56,000 mph (90,000 kph), creating a new crater 65 feet wide (20 meters).

Unlike Earth, the moon doesn’t have a thick atmosphere to safeguard it from the never-ending cosmic onslaught. As such, it regularly gets hit by meteorites with as many as 300 collisions having been recorded thus far since NASA first launched its monitoring program. No impact, however, has been as powerful as a most recent one, when on March 17 a roughly 1-foot-wide (between 0.3 to 0.4 meters) meteorite , weighing 88 lbs (40 kg), slammed into the moon releasing an important amount of energy, as powerful as a 5 tons of TNT explosion. 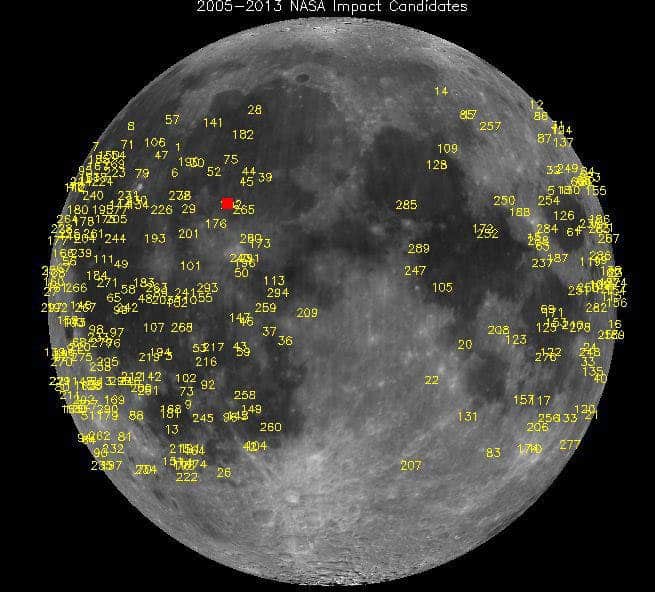 Hundreds of meteor sites have been recorded by NASA during the past few years alone. (c) NASA

The flash unleashed by the collision could have been seen with the naked eye by those fixing their gazes at the moon, according to NASA, though the event lasted for a mere second. Below, you can find embedded a NASA-produced 4 minute video reporting the meteorite crash, where you can also footage of the actual collision (skip to the 00:47 mark).

NASA scientists aren’t monitoring the lunar surface for meteor crashes just out of pure curiosity. The agency still has plans of sending astronauts or expensive equipment like rovers back on the moon – having a meteorite crashing right near the landing site or even in the vicinity of a manned outpost could spell disaster. By studying just how frequent meteorite crashes with the moon are and during which period, scientists can infer the safest spots and best timings for such maneuvers to be carried out.