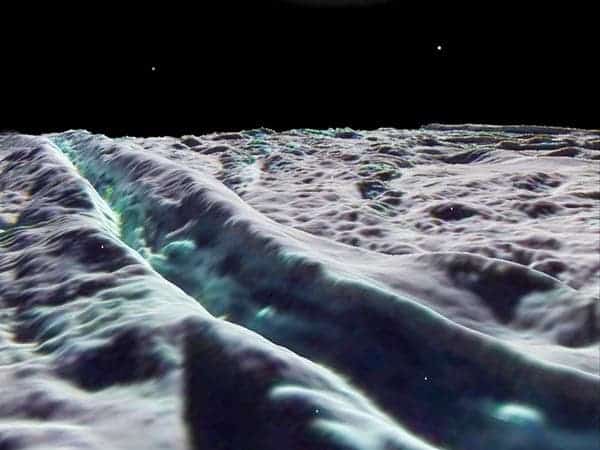 As the winter ski season is rapidly approaching, snow sports enthusiasts all over the world are already planing their trips, on a quest to find the most intense slop. Skiers need not to look farther, as Cassini scientists have announced that the probe has transmitted data which suggests Enceladus, Saturn’s icy moon, is coated by a thick layer of powdery snow.

Based on new high-resolution pictures of Enceladus from NASA’s Cassini orbiter, scientists have been able to determine descrete parameters describing Saturn’s satellite surface. By the looks of it, if you choose to ignore ultra-freezing temperatures and a gravity 100 times smaller than that on Earth, Enceladus’ surface might provide for a dream ski resort. It’s covered in a powdery layer of snow, measuring 330 feet (100 meters) in thickness, and the snow flakes itself are so fine, they’re only a few micrometers in size.

“The particles are only a fraction of a millimeter in size … even finer than talcum powder,” study leader Paul Schenk, a planetary scientist at the Lunar and Planetary Institute in Houston, Texas, said in a statement. “This would make for the finest powder a skier could hope for.

This remarkable landscape comes as a result of the fascinating geyser eruptions, only recently more in-depthly understood, which blast water and ice so powerfully upwards that it escapes Enceladus’ gravity and ultimately becomes part of its own ring around the planet, called the E Ring. Most of the jettisoned snow, however, falls back to the surface, softening the contours of the underlying landscape for the past millions of years.

Apart from discovering its potential as a ski resort, the patterns of fallen snow on the moon will also help scientists understand the internal heating mechanism driving the plumes, and the insulating properties of the moon’s surface. They’ll get more evidence to help their study of the phenomenon in 2012 and 2015, when Cassini passes Enceladus again.

For more information about the Cassini-Huygens mission, visit http://www.nasa.gov/cassini and http://saturn.jpl.nasa.gov .