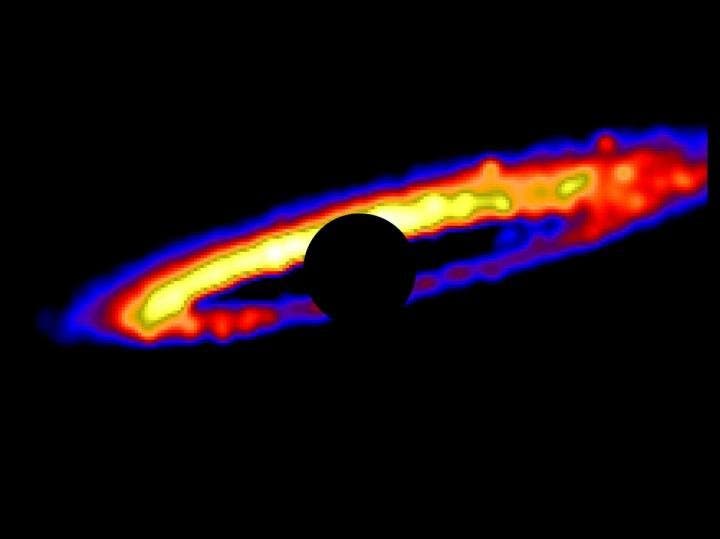 The stellar debris disk around HD 106906. This image was created using an innovative software designed at UCLA. The star itself is masked with a black circle and the various hues represent brightness gradients. Yellow is the brightest and blue the dimmest. Credit: Erika Nesvold/Carnegie Institution for Science

In 2014, astronomers discovered a very young solar system which is still seeding planets. Studying such young nurseries is important because physicists can gain a better understanding of how planets form both outside and inside our own solar system. In this case, there’s a planet with a mass 11 times that of Jupiter which oddly enough the research think it formed outside the solar system’s debris disk.

A debris disk is, as the name implies, a huge disk that can span millions of miles made of gas, dust, and ice. When a cloud becomes massive enough, it can collapse under its own gravity to form such a disk, which in turn provides the seeding material to create planets and stars. After the star is born and the gas evaporates, gravity starts pushing away the dust and debris which rotate and collide to form a structure similar to our very own Kuiper belt at the edge of the solar system.

The current consensus is that most if not all planets outside our solar system are formed inside such a vast disk of debris and very close to its center to boast. But this nearby young planet, called HD 106906b, is 650 times as far from its star as Earth is from the sun. It’s so far away that it takes 1,500 years to make one single complete orbit around the parent star. Strikingly, it’s only 13 million years old too — an embryo basically compared to planets from our solar system which formed 4.6 billion years ago.

Smadar Naoz, a University of California, Los Angeles, assistant professor of physics and astronomy, along with colleagues, calculated the planet’s orbital period using a new software developed by the team. It’s called Superparticle-Method Algorithm for Collisions in Kuiper belts and debris disks, or SMACK for short. The algorithm was written by s Erika Nesvold, a postdoctoral fellow at the Carnegie Institution for Science, who is the lead author of the paper published in The Astrophysical Journal.

“This is such a young star; we have a snapshot of a baby star that just formed its planetary system — a rare peek at the final stage of planet formation,” said Naoz said.

But the results surprised everyone because the model suggests that HD 106906b formed outside the solar system’s disk.

“Our current planet formation theories do not account for a planet beyond its debris disk,” Naoz added.

Using SMACK which was fed observational data gathered in 2016 by American and European astronomers, the team re-created the shape of debris disk. The model does not contain planets nor do the researchers know if there are any other planets besides  HD 106906b. It’s important to note that previous researchers thought you couldn’t recreate a debris disk without taking planets into account, so this is pretty much a breakthrough in itself.

“In our solar system, we’ve had billions of years of evolution,” said Michael Fitzgerald, UCLA associate professor of physics and astronomy, and the study’s other co-author. “We’re seeing this young system revealed to us before it has had a chance to dynamically mature.”

Naoz refrained from making any wild or exotic hypothesis that might explain the findings. “There are no assumptions; this is just physics,” she said. One thing’s for sure, everyone will keep on eye out for similar findings.