Astronomers working with the Hubble telescope have discovered that the Universe is expanding 5-9% faster than expected, and this is intriguing. 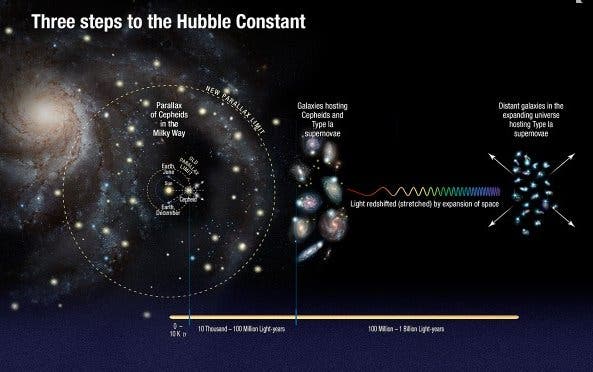 This illustration shows the three steps astronomers used to measure the universe’s expansion rate to an unprecedented accuracy, reducing the total uncertainty to 2.4 percent. Astronomers made the measurements by streamlining and strengthening the construction of the cosmic distance ladder, which is used to measure accurate distances to galaxies near and far from Earth. Credit: NASA, ESA, A. Feild (STScI), and A. Riess (STScI/JHU)

Even though it’s a well documented phenomenon, universal expansion is still baffling. The entire universe, every single thing that we know of is moving apart – and it’s accelerating! That’s just crazy when you think about it. The fact that we can measure how fast it’s expanding is even crazier.

In theory, you could measure the expansion of the universe could by taking a standard ruler and measuring the distance between two cosmologically distant points, waiting a certain time, and then measuring the distance again, but in practice, you’re never going to have a cosmological ruler, and time isn’t really on your side either. So astronomers are using other indirect methods, which of course come with an associated error. Such an error was corrected this time, and it came as quite a surprise.

“This surprising finding may be an important clue to understanding those mysterious parts of the universe that make up 95 percent of everything and don’t emit light, such as dark energy, dark matter, and dark radiation,” said study leader and Nobel Laureate Adam Riess of the Space Telescope Science Institute and The Johns Hopkins University, both in Baltimore, Maryland.

He an his team refined the measurement and managed to reduce the uncertainty to only 2.4 percent. They measured about 2,400 Cepheid stars (stars that pulsate radially) in 19 galaxies and compared the observed brightness of the stars. Cepheid stars pulsate at rates that correspond to their true brightness, which can be compared with their apparent brightness as seen from Earth to accurately determine their distance.

The new constant value they found 73.2 kilometers per second per megaparsec. (A megaparsec equals 3.26 million light-years.) This means that the distance between cosmic objects will double in another 9.8 billion years. We still don’t know what is the cause for the initial error, but one of the likely culprits is dark energy, already known to be accelerating the universe. Another possible explanation is an unexpected characteristic of dark matter. Dark matter is the backbone of the universe upon which galaxies built themselves up into the large-scale structures seen today.

“If we know the initial amounts of stuff in the universe, such as dark energy and dark matter, and we have the physics correct, then you can go from a measurement at the time shortly after the big bang and use that understanding to predict how fast the universe should be expanding today,” said Riess. “However, if this discrepancy holds up, it appears we may not have the right understanding, and it changes how big the Hubble constant should be today.”

One thought on “The Universe is expanding faster than we thought, new Hubble study finds”