As we were telling you already in several articles, the Rosetta probe is in orbit of a comet – the 67P/Churyumov-Gerasimenko comet. But to make things even more exciting, Philae, Rosetta’s lander, also made contact with the comet; among other things, the lander found carbon molecules on the comet – the basis of life on Earth. Considering how comets are believed to have formed during the earlier stages of our solar system, this could also shed light on how life evolved on Earth. 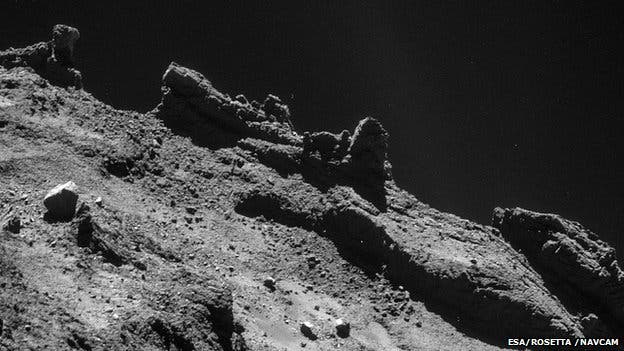 The Philae lander found organic molecules on the surface of a comet.

Though Philae’s adventure on the comet was short lived (lasting only 60 hours), the lander sent home important data. The first important piece of information is that the comet has organic molecules on its surface; not so much has been released about the molecules so far – we only know that they are carbon molecules, not how complex and what type. Other analysis showed that the comet is covered in ice, with only a thin dust layer above.

Dr Fred Goessmann, principal investigator on the Cosac instrument, which made the molecule detection said that the team is still working on interpreting the results, and no additional information will be given until that is solved. This is only natural, because the stake is so high; they may provide crucial insight to the possible role of comets in contributing some of the chemical building blocks to the primordial mix from which life evolved on the early Earth. Let’s rewind a bit.

We still don’t know how life appeared on our planet. The earliest evidence for life on Earth comes from fossilized mats of cyanobacteria called stromatolites in Australia that are about 3.4 billion years old. There may have been other, earlier life forms, but they haven’t left any signs of their existence – or at least we haven’t found them. Still, the general idea is that life appeared sometime during that period. But even as scientists have a fairly good idea when life appeared, we still don’t know how it appeared.

“Many theories of the origin of life have been proposed, but since it’s hard to prove or disprove them, no fully accepted theory exists,” said Diana Northup, a cave biologist at the University of New Mexico.

Among the leading theories, there is the idea that crucial organic molecules came from outer space, through comets. Complex organic compounds, like amino acids, are the building blocks to life. The conditions on the young Earth were not favorable for making those compounds, and for this reason, many researchers believe they came from an outside source.

The discovery of the molecules was made with Philae’s Cometary Sampling and Composition Experiment (COSAC) instrument. Philae also inspected the ice on the surface of the comet. Because the temperature is so low, the ice has the tensile strength of a sandstone on Earth.

“It’s within a very broad spectrum of ice models. It was harder than expected at that location, but it’s still within bounds,” said Prof Mark McCaughrean, senior science adviser to Esa, told BBC News. People will be playing with [mathematical] models of pure water-ice mixed with certain amount of dust.”

There is still some doubt regarding the nature of the ice, but researchers are pretty certain.

“You can’t rule out rock, but if you look at the global story, we know the overall density of the comet is 0.4g/cubic cm. There’s no way the thing’s made of rock. It’s more likely there’s sintered ice at the surface with more porous material lower down that hasn’t been exposed to the Sun in the same way.”

Unfortunately, we can’t get a full picture yet. Scientists had to conduct as many analysis as possible before Philae’s battery ran out, but they weren’t able to conduct all the tests they planned.

“We didn’t necessarily see many organics in the signal. That could be because we didn’t manage to pick up a sample. But what we know is that the drill went down to its full extent and came back up again.”

“But there’s no independent way to say: This is what the sample looks like before you put it in there.”

But Philae is not gone for good yet – as the comet closes in on the sun, it will also recharge its batteries – unfortunately, this will also bring its demise.