Like Kepler, TESS will be using the transit method illustrated here. Essentially, as a planet passes in front of its star, it creates a dip in the star’s luminosity, which can be detected. This is called a transit. Image credits: NASA Goddard Space Flight Center.

The Kepler telescope ushered in a new age of space exploration, enabling astronomers to discover thousands of exoplanets. It was a magnificent tool that was successful beyond our wildest dreams. However, it’s nearing the end of its lifetime. Crippled and almost out of fuel, Kepler is fast approaching its conclusion. But rest assured — NASA already has its replacement prepared.

NASA’s Transiting Exoplanet Survey Satellite, or TESS, will be carried in outer space by SpaceX’s Falcon 9 rocket in just a few days, on April 16, where it’s set for even greater success than Kepler. Think of it this way: if Kepler was looking through a straw, TESS will be visualizing 90% of the night sky. In other words, Kepler had a very narrow surveying angle, whereas TESS will have a much broader angle — overall, the area covered by TESS will be about 350 times larger than what Kepler could witness. This is largely owed to its unusual orbit — TESS has a never-before-used orbit which was designed to minimize the time the telescope spends obstructed by Earth or the Moon. However, there’s a trade-off. 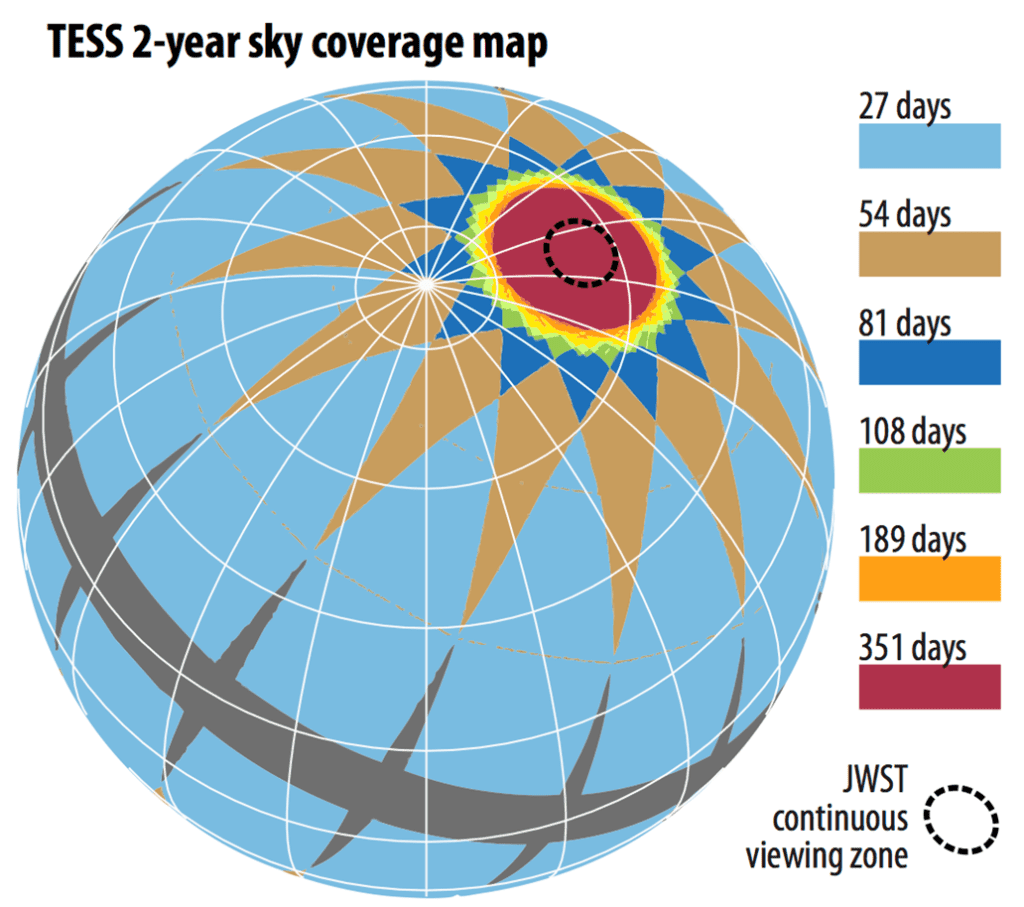 TESS will observe the southern skies first, and then the north. The survey strips will overlap near the celestial poles, creating pockets of sky that will have longer observation times. Conveniently, the patches of sky that will be observed the most by TESS are also in ideal viewing locations for the future James Webb Space Telescope, which will be able to study planets that TESS finds in more detail. Image credits: NASA / MIT.

TESS traded resolution for this larger angle — whereas Kepler was able to find planets up to 3,000 light years away, most of the exoplanets TESS finds will be just 30 to 300 light years away. Kepler has already discovered over 2,500 planets, with another 2,500 planet candidates being currently under review. TESS is expected to find 3,000 to 4,000 planets orbiting M-dwarves — relatively small and cold stars, red dwarfs of the M spectral type. Red dwarfs are by far the most common type of star in the Milky Way, but because of their low luminosity, they are difficult to study.

Currently, TESS is at Kennedy Space Center’s Payload Hazardous Servicing Facility, getting its thrusters fueled up for flight — and we couldn’t be more excited for this mission.