A group from the Laboratory of Astrophysics of Bordeaux, France, and the National Centre for Scientific Research (CNRS) has made a most exciting discovery. The astronomers found that an odd binary system – a solar system comprised of two stars – actually behaves like a double star, with two disks of matter encircling the system in a beautiful dance of gas and dust exchange. The breakthrough came after observations showed that that two disks – a wheel inside a wheel –  transfer matter from the outside to the inside, thus sustaining the smaller disk and aiding in planetary formation. The discovery has profound implications in exoplanet search efforts. 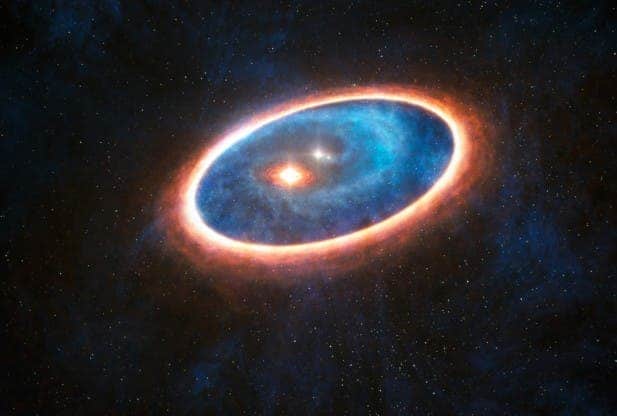 The outer disk surrounds the entire system, called GG Tau-A, while the inner disk circles the two companion stars closely. The latter disk has a mass roughly equivalent to that of Jupiter, yet it’s existence has perplexed scientists for quite a while. The two stars are constantly feeding matter from the disk, so in time it should have disappeared – why are we still seeing it? Using the  Atacama Large Millimeter/submillimeter Array (ALMA) in Chile,  Anne Dutrey and colleagues found gas clumps in the region between the two disks, which serves to explain the anomaly since it means matter is being transferred from the outer ring to the inner one, thus sustaining it.

“Material flowing through the cavity was predicted by computer simulations but never imaged before. Detecting these clumps indicates that material is moving between the disks, allowing one to feed off the other,” said Anne Dutrey from the Laboratory of Astrophysics, Bordeaux in France. 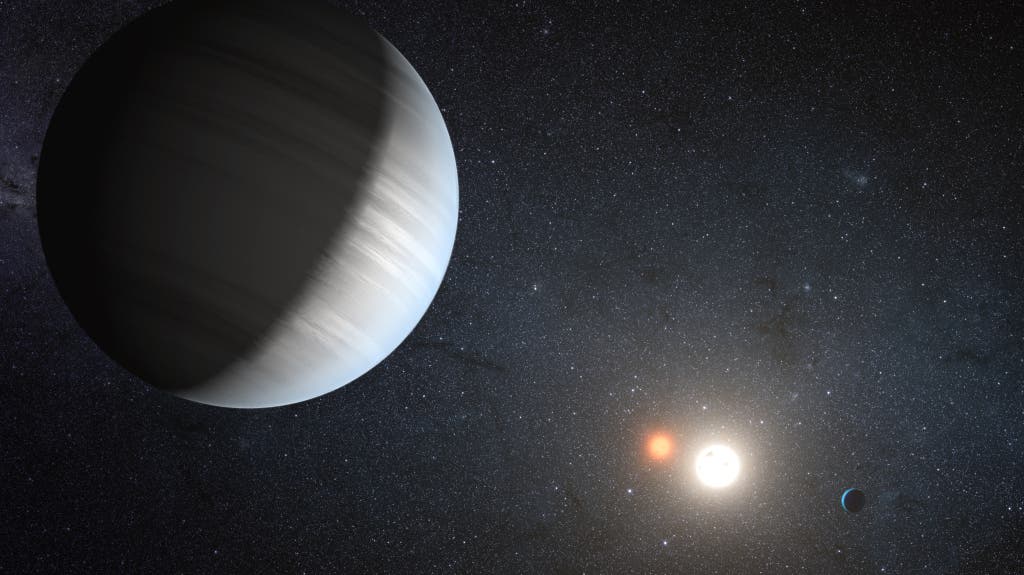 Artist’s concept of exoplanets in a two-stars system. The planets found so far orbiting such systems are gas giants like Jupiter. Credit: NASA/JPL-Caltech/T. Pyle

This is where things get interesting. Planets are born from the same spinning disk of gas and dust material that went into forming a star, like our sun. This disk is called a solar nebula and even after some of this material was bound by gravity and collapsed to form a star, it still retains an angular momentum while it orbits the new-born star. Particles in the spinning disc begin to clump together as gravity attracted them to each other and over millions of years these clumps continue to collide and join together, in a process which scientists described as accretion. Because this is an extremely enduring and slow process, the solar nebula needs to have enough material to feed the planetary formation, as well as parent star which also sucks in gas and dust from the disk.

“We may be witnessing these types of exoplanetary systems in the midst of formation,” said Jeffrey Bary, an astronomer at Colgate University in Hamilton, N.Y., and co-author of the paper. “In a sense, we are learning why these seemingly strange systems exist.” 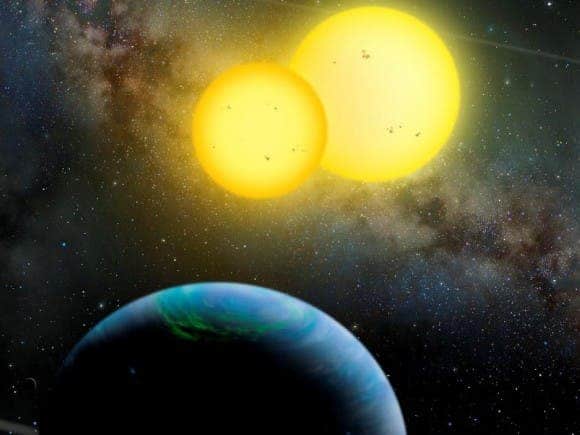 If the same process occurs in binary systems such as GG Tau-A, then it would explain why so many planets have been and continue to be discovered in binary systems. Originally, scientists weren’t interested in binary systems when looking for planets outside our solar system, but now investigators are beginning to take an even closer look and investigate the possibility of planets orbiting individual stars of multiple-star systems.

“This means that multiple star systems have a way to form planets, despite their complicated dynamics. Given that we continue to find interesting planetary systems, our observations provide a glimpse of the mechanisms that enable such systems to form,” concludes Bary.

GG Tau-A  is only a few million years old and lies approximately 460 light-years from Earth in the constellation Taurus. The discovery was reported in the journal Nature.