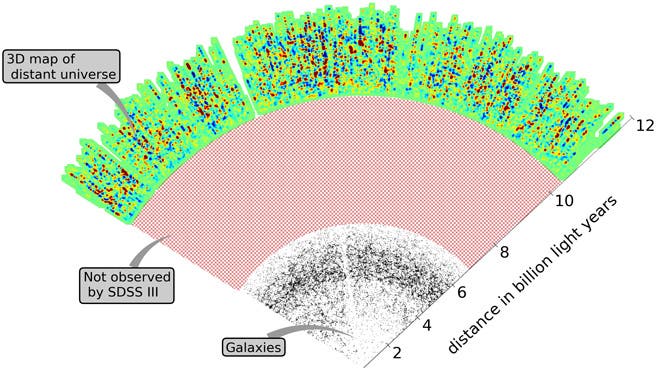 Illustration of where the new SDSS map data exists in space and time.

Unveiled this past weekend, astronomers from the Sloan Digital Sky Survey have created a 3D map of the Universe using the light from 14,000 quasars, some of the brightest bodies in the universe, to illuminate gas clouds in regions of space some 11 billion light years away. From the study‘s abstract:

Previous attempts at creating a working 3D map of the Universe have been with successful results in the past, but they had only gone as far as plotting galaxies 7 billion light-years away from Earth. This new version goes far beyond anything previously attempted in distance and time, as it charts clouds of hydrogen as far as 11 billion light years. 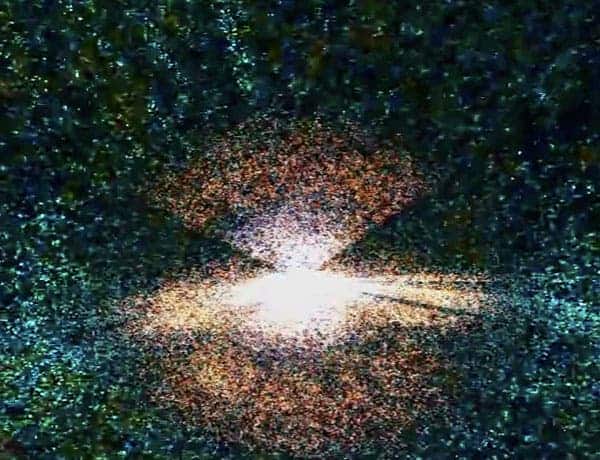 Of course, it’s not like someone will be able to chart through these maps anytime soon, especially considering we’re having difficulties reaching infinitely closer points compared, like Mars, but these mapped out 3D representations will provide absolute invaluable insights towards the formation of the Universe, and help answer numerous puzzling questions astronomers have long been after, including the nature of dark energy.

“We’re looking for a bump in the data that may tell us how fast universe is expanding,” said cosmologist Anže Slosar of Brookhaven National Laboratory, one of the researchers who presented the map May 1 at the American Physical Society meeting in Anaheim, California. “We don’t have enough data to see the bump yet, but we expect to get there in a few years.”

Data for the map was scanned with the help of the Baryon Oscillation Spectroscopic Survey, or BOSS, which can analyze light from individual quasars. The team analyzed 14,000 of about 160,000 known quasars and by 2014 astronomers hope to have 50,000 or 60,000 quasar slices in their grips; enough data, they hope, to finally elaborate a meaningful hypothesis concerning the formation and fate of the Universe. The researchers also plan to release a proper 3-D representation of the data (instead of the 2-D images shown here) for the public by then. 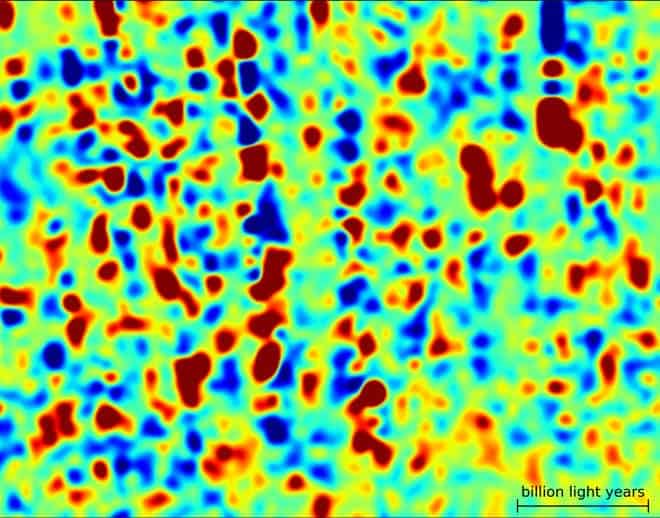 One thought on “Astronomers plot largest 3D map of the Universe”