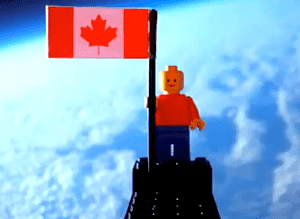 Canadian duo, Mathew Ho and Asad Muhammad, both only 17 years old, have managed to put the infamous Lego man, attached with the Canadian flag, into space. They managed to achieve this with extremely limited resources, using items bought off craiglist, and unlimited ingenuity.

The plastic figurine was attached to a styrofoam box, which also contained a camera which documented the whole event , as well as a GPS tracking device – the box itself was carried away by a helium balloon, which the boys built themselves in their spare Saturdays for the past four months. The balloon, ascended some 24km into the upper atmosphere from where the Earth’s curvature can be seen. The two managed to recover the bundle attached to a hand-stitched parachute from a field 122km from the launch site. Coincidentally, earlier today before I had heard of the Canadian teens accomplishment, I was reading a piece on Scientific American which debated whether a balloon could fly into outer space, and head towards distant galaxies.

Check out the video documenting the experience below. By the way, is that the International Space Station at 1:02?

Astrophysics professor Dr Michael Reid, from the University of Toronto, praised the boys, saying: “It shows a tremendous degree of resourcefulness. For two 17-year-olds to accomplish this on their own is pretty impressive.”

Lego sent a note of congratulations. “We are always amazed by the creative ways in which Lego fans use our products, and humbled by how many unsuspecting places we appear, like attached to a helium balloon in … space,” said the company’s brand relations director, Michael McNally.

Their feat is nothing short of spectacular, and gives to show that incredible things can happen when you put your heart and mind to it. Since the event took place, Ho and Asad have become super stars in their home country, as their story circulated all over the web and various news outlets in the world. Still, the hype is definitely well deserved. Share this story with your friends.