Plants and animals are about as different as you can get. Plants make their own food and are stuck in one place, while animals need to find food to eat and can move around on their own. But, what makes plants and animals truly different? Each living organism is built from cells, and though plant and animal cells are very similar, there are key differences between these organisms. 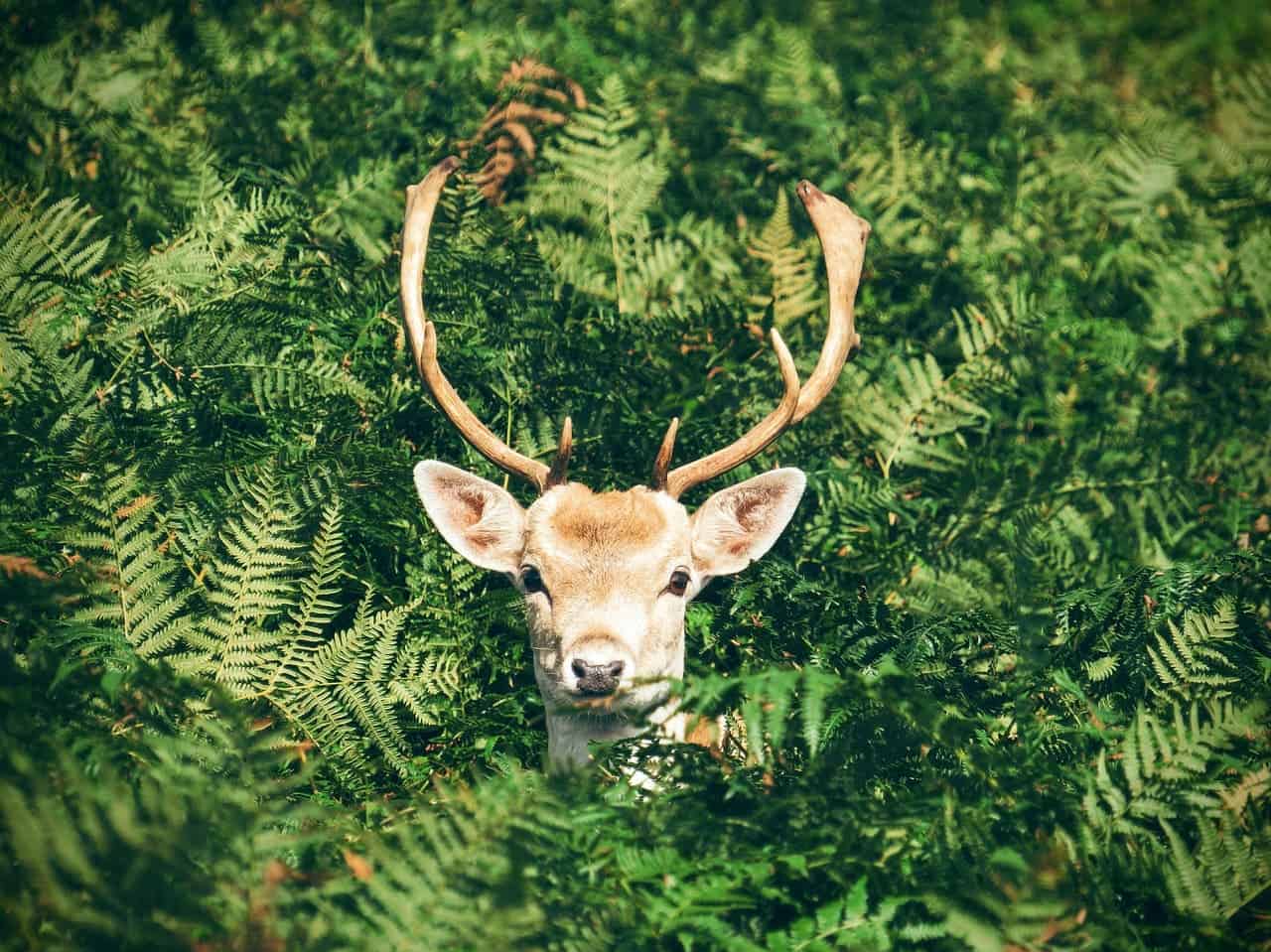 As a small high school biology recap, all cells, regardless of whether they are in plants or animals, are bound in a membrane and contain organelles that perform tasks that keep the cell going. The core organelles in plant and animal cells are responsible for essential tasks such as processing energy, making new proteins, and getting rid of waste as performed by the mitochondria, endoplasmic reticulum, the Golgi Apparatus, and others. The activities going on in these cells are coordinated by the nucleus, which also stores precious DNA. Now, on to what make plant and animal cells special.

Plants have three main differences that distinguish them from animals. Chloroplasts allow plant to make their own food by harnessing the energy of the sun. A really long time ago (millions of years), single celled organisms evolved the ability to use solar energy to split water molecules and generate oxygen. Cells engulfed some of these photosynthetic organisms, and likely formed a symbiotic relationship with them. Now, chloroplasts are not their own organism, but an organelle that serves an important function in the cell—to make sugar to feed the cell. 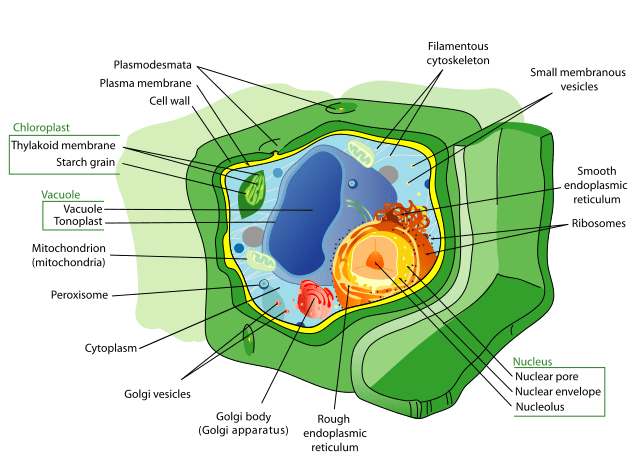 A cross-section of a plant cell. Image credits: Mariana Ruiz.

Another structure that is unique to plant cells is the cell wall. It is a stiff layer outside the cell membrane. It makes the cells stronger and resistant to osmotic and mechanical stress. Importantly, it also allows to plant to build up high pressure within the cell itself. When a plant is well-watered, the storage organelle of the cell (the vacuole—to be covered next) is full and presses against the cell wall. This makes a plant appear vital and sturdy. However, if conditions aren’t so good, let’s say a dry period or negligent owner, there isn’t as much pressure against the cell wall and the plant wilts. Although the plant wilts, the cell wall maintains the structure of the leaves and stems. The cell walls are also why plants are able to have rigid structures like trunks and leaves.

Vacuoles themselves are not unique to plants — animals have them as well. However, what is unique is that plants have one (comparatively) huge vacuole in the center of their cell, while animals have several smaller vacuoles. They are fluid-filled sacs that have a number of roles, including breaking down molecules and storing nutrients and other important products in the cell. The plants use the vacuoles to control their cell size and shape.

As previously mentioned, animals do not have a rigid cell wall like plants do. Without this constraint, animals were able to evolve many different cell types, tissues, and organs. For example, animals were able to develop nerves and muscles that led to their mobility and neurological capacities. There’s a reason why you don’t see a plant taking a jog or working on a crossword puzzle—they are unable to form these types of tissues. 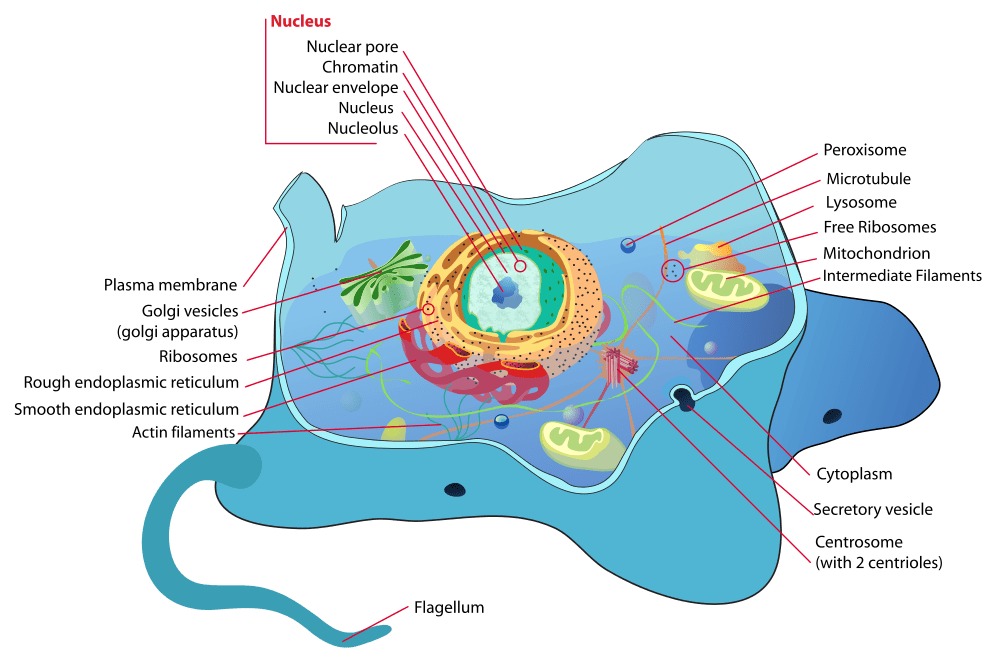 Since an animal cell doesn’t have a cell wall, it needs some way to keep its shape. This is where the intermediate filaments come in. They are fibrous proteins that are constructed like a rope with many long strands of filaments twisted together to resist tension. Though plants also have a cytoskeleton composed of microtubules and microfilaments, it is generally thought that they do not have intermediate filaments.

Animal cells have special lysosomes — organelles with a very low internal pH — to break down biomolecules in the cell. Specialized plant vacuoles fulfill a similar role as lysosomes, though they are named differently. They are considered different because they lack certain enzymes and functions associated with lysosomes.

There are other minor differences between plant and animal cells, but these are the major ones that make a plant a plant and an animal an animal.