During the past few days, the world has been hit with some of the most unusual weather ever. In the UK, warm Mediterranean air masses pushed temperatures to unprecedented peaks, while in the US was hit by flash floods in Tennessee and a massive blizzard storm in the northern plains. Now, another freak weather event is set to hit US territory: Wutip is set to become the earliest super-typhoon in recorded history, hitting Guam with gusts of up to 180 mph (289 km/h).

The typhoon started as low-pressure just south of the Marshall Islands on February 16. It then began to gradually pick up steam while moving westward, finally receiving the name Wutip from the Japan Meteorological Agency on February 20. A day later, Wutip strengthened a severe tropical storm, before intensifying further into a typhoon later that day. It continued to intensify, reaching what was initially predicted to be its peak as a Category 4-equivalent.

But Wutip continued to surprise meteorologists, blowing up into a full Category 5 super-typhoon, becoming the strongest February storm of any kind ever recorded in the Northern Hemisphere. Sustained winds reached 160 mph (257 km/h).

February typhoons are extremely unusual. The last such storm to brush by Guam was Irma in 1953 — thankfully, the island escaped with minimal damage at the time. 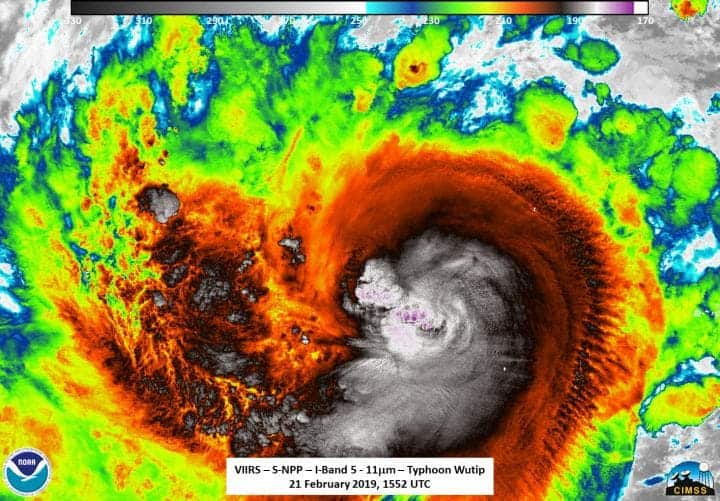 Wutip continues its movement towards the Philippines, but thankfully, the storm’s intensity has decreased substantially. In order for such a storm to continue picking up steam, it would need warm ocean waters and weak upper winds — which are a rare occurrence in February. Even the level it reached was extremely unlikely to start with. While previous research has shown that climate change makes extreme weather more likely and tends to exacerbate big storms, there’s no evidence yet to suggest that Wutip is directly connected to climate change.

A typhoon is a mature tropical cyclone that develops in the Northern Hemisphere between 180° and 100°E. Typhoons are differentiated from other major storms (such as a cyclone or a storm) solely on the basis of location. Typhoons occur in the northwestern Pacific Ocean, whereas hurricanes occur in the northeastern Pacific Ocean or the Atlantic Ocean.

A hurricane is a storm that occurs in the Atlantic Ocean or the northeastern Pacific Ocean, a typhoon occurs in the northwestern Pacific Ocean, and a tropical cyclone occurs in the south Pacific or the Indian Ocean. There are several scales used for classifying these storms, but most common is the Saffir Simpson wind scale, which classifies storms on a scale of 1 (least severe) to 5 (most severe). This scale estimates potential property damage. Category 5 storms can cause catastrophic damage, tearing down house roofs and collapsing walls and trees. These storms have wind speeds of 157 mph (252 km/h) or higher.