Researchers had already known that dogs can sniff out hospital superbug Clostridium defficile from stool samples of patients, but now, a really cute beagle has been trained to sniff out the bacteria from the air in the hospital. 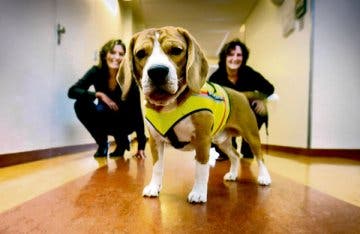 C. difficile infection generally occurs in patients who have been recently admitted in hospitals and were previously on antibiotics. In this research, scientists from Netherlands have trained a dog which can detect the distinct smell in the bacteria’s stool.

They chose a two-year old beagle, called Cliff, for this study; beagles are known not only for their absolute cuteness, but also for their sharp sense of smell – for which they are commonly employed as detection dogs.

Cliff’s detection abilities were tested, as he was asked to sniff 50 stool samples from the people who had the infection and 50 stool samples that were from healthy people; his results were remarkable, being able to identify all 50 positive samples and 47 out of the 50 negative samples. What’s even better was not only that he was super effective at sniffing out the bug, but he was also very quick. It took him less than 10 minutes per case – the official test takes several days and is quite costly.